The powerhouse gallery Gagosian is not exactly the first place you would think to look to discover new talent. But walk into its Upper East Side location today and you’ll encounter the work of an artist you have likely never heard of—though you probably will soon. The 35-year-old Beijing-based artist Hao Liang is working to do nothing less than reinvent traditional Chinese ink wash painting.

Though he is well known in China, his inaugural exhibition with Gagosian, “Portraits and Wonders,” on view until June 23, marks his first solo show in the United States. And it sold out before it even opened.

Hao is bringing the ancient technique of ink wash painting, which is thousands of years old, into the 21st century with a heady mélange of art historical allusions and formal techniques that bridge Eastern and Western cultural symbols.

The artist made a splash last year when his landscapes of the Hunan province painted on silk were included in the Venice Biennale’s central exhibition. He was one of the youngest artists in the show.

As Hao continues to get international exposure, he could achieve in the market what he has already realized in his paintings—a link between the East and the West.

“Understandably, Hao is better known in Asia than he is in the West, but we’re introducing his extraordinary practice to a wider and more global audience,” Nick Simunovic, the director of Gagosian Hong Kong, tells artnet News. “We made the decision to offer this work exclusively in the West. We placed all of his paintings with major collectors, museum trustees, and institutions.”

Hao was born in 1983 in Chengdu, the sixth largest city in the country, located in the Sichuan province. His first exposure to art—and traditional Chinese painting in particular—came at a young age through the father of his godmother. A notable collector of Chinese art, he studied under, and was close friends with, perhaps the most prominent Chinese artist of the 20th century, Zhang Daqian. (Daqian, a master guohua painter, passed away in 1983—the same year Hao was born.)

Hao enrolled at the Sichuan Fine Arts Institute in 2002, majoring in Chinese painting, before pursuing a master’s degree there in 2007. He considered becoming a teacher, but at the encouragement of Xu Lei—another well-known Chinese artist—decided to pursue art instead.

His career has enjoyed a steady upward trajectory ever since. Astoundingly, even without having had a solo show in the US until this year, his work has been acquired by the Metropolitan Museum of Art in New York, the Kadist Art Foundation in San Francisco, and the Centre Georges Pompidou in Paris. He’s had institutional shows at the Bonnefantenmuseum in the Netherlands and the Ullens Center for Contemporary Art in Beijing.

A cynic might say his work is tailor made for today’s market at a moment when Chinese buyers are transitioning from buying traditional to more adventurous international contemporary fare. But for Hao, a globalist, cross-generational perspective is at the core of what defines him as an artist.

“In the current Chinese culture dilemma, it might be more interesting to participate and comprehend the contemporary cultural constructs through searching for a modernity intrinsic to Chinese culture,” he tells artnet News. “I discovered the openness of literati art. Although a particular methodology in itself, it can still accommodate different cultural resources. Many things I find interesting could enter this work system and became the materials for my work.”

Take, for instance, the centerpiece of his current exhibition at Gagosian: a 32-foot-long panoramic silk scroll titled Streams and Mountains without End (2017). Moving right to left, the imagery of the painting morphs from meticulous figuration to painterly abstraction—a formal evolution that mirrors a broader shift in art history. Angular trees and fractured mountains ridges transform into geometric shapes; a barren landscape based on those painted by 16th-century Chinese artist and theorist Dong Qichang transforms into a cubist configuration of forms that recalls Braque and Picasso.

Elsewhere in the gallery, two paintings—a diptych and a triptych—each consider the same subject in different ways, from different angles—a common trope of Chinese literati art. Inspired by inkstone tablets of 19thcentury Chinese artist Wang Ziruo, the larger canvas in Day and Night(2017–18) imagines the scene during the day, every detail visible, while the smaller work renders it at night—a foreboding, charcoal black vision.

Not surprisingly, Hao’s process is laborious. His paintings can take anywhere from one to two months to complete, while hand scrolls take up to six months. He makes preparatory sketches on paper, then translates them onto silk—his primary material. After that, he adds custom-made paints sourced from plants and materials, often adding dozens of layers to achieve the preferred tone—usually an earthy grey, the pallor of which is in keeping with the traditions of the practice.

Those who have come to know Hao’s work in China say he is doing more than adapting a historic style to the present day.

“It’s easy for Western critics to write the work off as belonging to some tradition of Chinese ink painting, but there is a whole world of conservative ink painters in China who find his work heretical,” says Philip Tinari, the director of the Ullens Center for Contemporary Art (who interviewed Hao for the exhibition’s catalogue).

“It’s true that Hao Liang’s work requires a viewer who is not conversant in Chinese art history to put in a bit of extra effort to build a context for what they are looking at,” Tinari says. “Many will find this cumbersome, but think about how much referentiality and intertextuality there is in work by contemporary Western artists.”

He points to John Currin, an artist of whom Hao is a big fan. “Imagine looking at Currin’s work without knowing anything about the renaissance, or Courbet. You might still enjoy it, but there are so many other layers beneath,” Tinari notes. 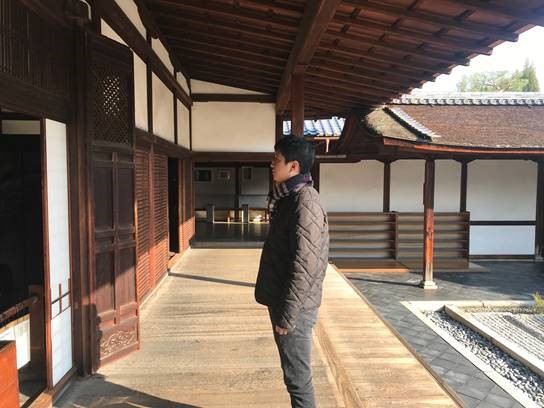 “I’m equally interested in modern and contemporary art,” Hao tells artnet News. “For me, restructuring the literati creative system is critical for the present. I do it through my own thinking and fantasies so that I can traverse across the past and present.”

“Portraits and Wonders” is on view through June 23, 2018 at Gagosian’s 980 Madison Avenue location.