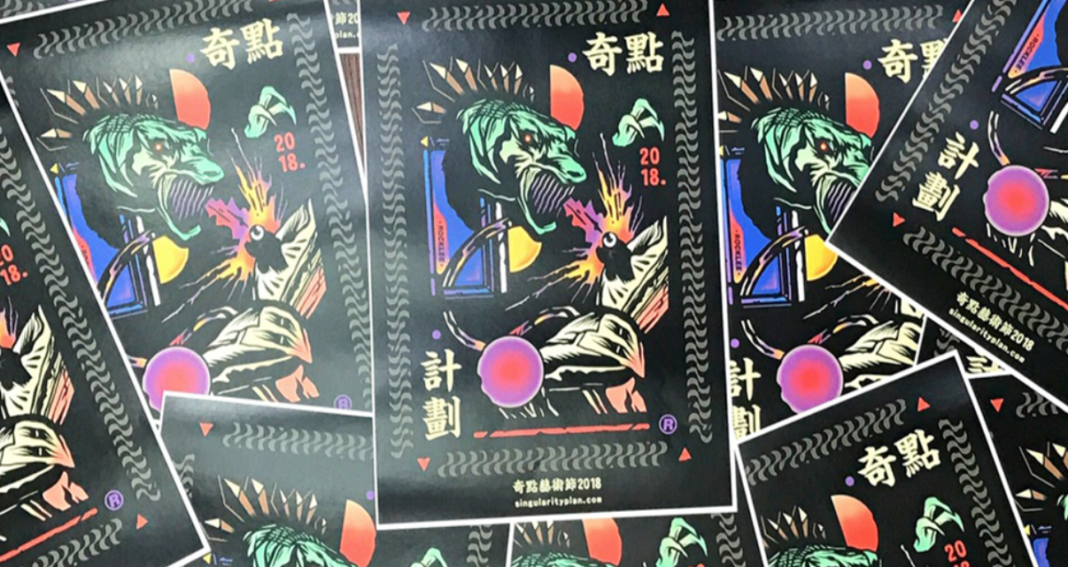 Over 100 artists from Greater China converged on Taigucang Wharf in Haizhu District, Guangzhou for Singularity Festival last weekend. The event was highly anticipated by locals, fans and artists alike, with long lines circling the old dockland building over the festival’s three day run.

A plethora of great Southern Chinese artists, predominantly from Guangzhou, Shenzhen and Hong Kong, were in attendance, displaying their independent works of art. Contemporary art gets a lot of play in Guangzhou, while illustrators and animators tend to be quite disparate. As with the thriving music scene in the city, however, once you start looking there is no end to what you can discover.

While it is tempting to simply compile a list of all the great collectives and artists that we came across during the day, you can find attendees on the weekend over on WeChat.

Posters for Valencia’s Tenderete Festival, at which Singularity had a booth

Luckily we managed to get in early, escaping the rain on Sunday morning. Once inside we mixed with the crowd, chatted with artists and vendors and picked up a few zines for our troubles.

One of the first stops we made was at Fever Dog’s stall. We were at once attracted by the computer generated imagery of this illustrative outfit based out of Shanghai who display off-kilter images, frequently making references to animals, and their signature character, Fever Dog.

Prior to the festival, we were keen to check out some of the more prominent toy and sofubi makers from Guangzhou and beyond. Damtoys were founded in Hong Kong but subsequently moved their operations to Guangzhou. Their toys tend to focus of sci-fi, dystopian, steam-punk characters. Their fascinating ability to sculpt fantastic works had us drooling at the mouth and reaching for our wallets.

Up next, Guangzhou art group Shilong‘s booth was adorned with red and white comics, a signature of their artistic style. Piecing together the gruesome and grotesque aspects of their imagination, with frequent references to old time horror and sci-fi movies, the result is a range of blistering images soaked in metaphorical blood.

One of the more pleasing aspects of the festival was the diversity on show throughout the spacious hall. Reference for example Dali大力, a Hangzhou based group whose vibrant colors and energetic imagery stood in stark contrast to booths like Tony Cheung’s and Shilong’s.

AlAN, from the island of Hainan, had one of the more popular booths at the festival. Engaging with visitors, the Haikou-based artist drew freehand sketches for passers by.

Amongst the installations in the space was Small DX’s Elvis Presley, an astronaut structure built from a metal frame and draped in a thin white fabric. Describing the idea of the pursuit music as an otherworldly voyage perhaps, the structure sat less than a few metres away from a group of steel-pan buskers called CheninPan, who have gained a following for their flash mob appearances around the city.

The festival organisers, Singularity Plan, have made no secret of their desire to highlight artists and images that don’t get a lot of play outside of self-owned shops and websites. With young artists taking up much of the space on offer over the weekend, many of the works that we came across dealt with the idea of freedom – sexual freedom, emotional freedom and generally the idea of freedom of expression.

Of the four artists who co-founded the festival, ETH and Tony Cheung’s works exemplify best the willingness to dig into the darker side of the imagination. The guys from Singularity Plan have also been consistently excellent at bringing their art to various global festivals such as Zapp! and Tropicana Dreams, with far-flung artists, like Carles G.O.D, returning the favor by travelling to China over the weekend.