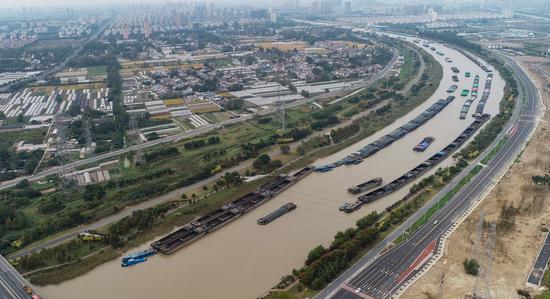 Authorities in Jiangsu province have unveiled plans for a Grand Canal museum and a national cultural park covering multiple cities to protect one of the world’s oldest manmade waterways.

The museum, to be built in Yangzhou’s Sanwan Park, will consist of a four-story building in the shape of a ship, and a 100-meter-tall pagoda.

It has been designed by architect Zhang Jinqiu, who is a member of the Chinese Academy of Engineering.

“The museum will make the most of the Grand Canal basin’s long history and views,” said Xu Rong, chief engineer of the China Northwest Architecture Design and Research Institute.

“It will be placed next to the canal and cover 16,000 square meters.

“From the top, visitors will be able to appreciate a view of the whole Sanwan Park.”

According to the provincial government, the cultural park will stretch 690 kilometers along the ancient waterway, covering 11 cities.

Once opened, it will be the world’s largest national park and feature many places of interest, including scenic spots, cultural relics, and ancient and modern water conservancy facilities.

Dating back 2,500 years and stretching 1,797 km between Beijing and Hangzhou, Zhejiang province, the Grand Canal is among the world’s oldest and longest canals.

In 2014, about 1,000 km of the man-made waterway was listed as a UNESCO World Intangible Cultural Heritage site. Roughly a third of that runs through Jiangsu, according to the provincial government.

Although the Grand Canal is not as important in terms of transportation as it was two millennia ago, it has become an important and impressive cultural symbol for the Chinese people, said Mei Yaolin, director of the Jiangsu Institute of Urban Planning and Design.

“It’s important to make the public aware of the cultural heritage of the Grand Canal and enjoy the benefits brought by its protection,” he said, adding that Jiangsu will improve the environment along the canal.

The provincial government has said experts have been drafted in to restore nearly 800 riverside villages, 1,000 cultural relic protection zones and countless sites of intangible heritage.

Suzhou, for example, aims to carry out water treatment over 100 sq km in the next three years and will invest 7.3 billion yuan ($1.05 billion) to reinforce embankments, plant trees and build leisure centers.

The province also plans to establish a Grand Canal research institute and platforms for international communication.