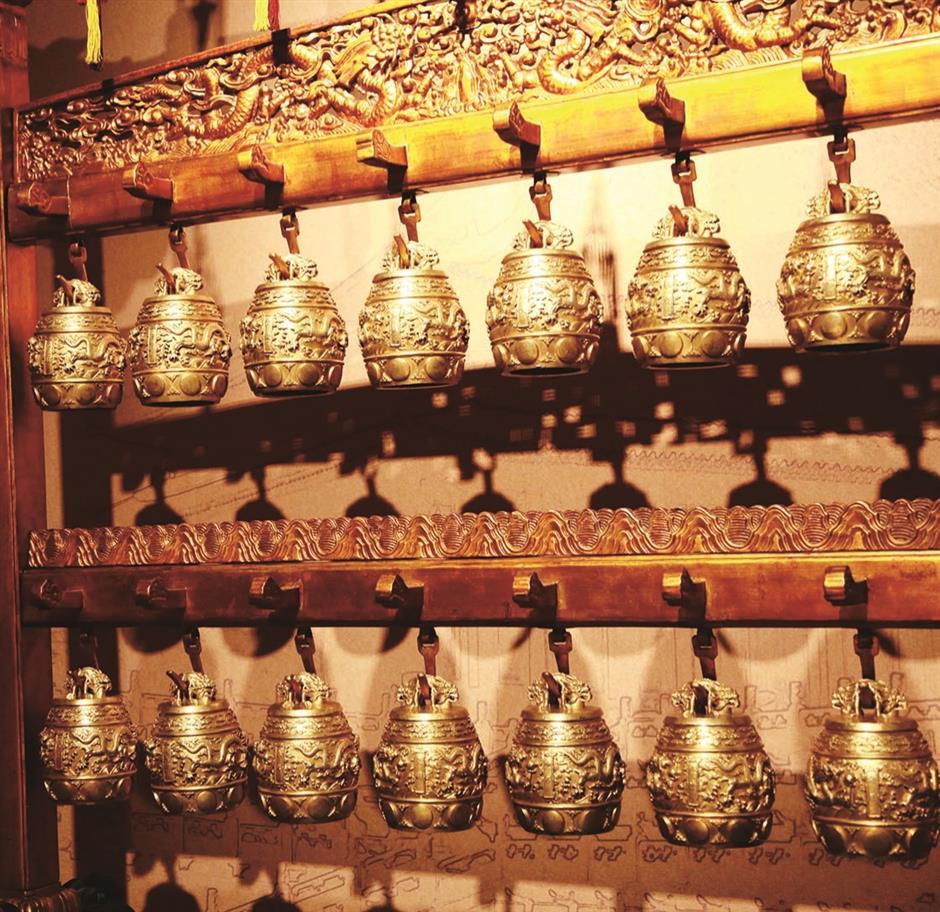 Emperor Qianlong (1711-99), the sixth emperor of the Qing Dynasty (1644-1911), was one of the longest-reigning monarchs in Chinese history. And it’s fair to say his administration went through a golden period in China’s history.

In 1790, Emperor Qianlong celebrated his 80th birthday, which was of national significance and in tribute he was showered with valuable gifts. Among them, golden bianzhong, or a set of golden bells, won the heart of the emperor. The gift was presented by a dozen officials.

“In the 30th year of Emperor Qianlong’s reign, an official sent a set of 11 bells, made in the Zhou Dynasty (1046-256 BC), to the emperor who was very happy. He even ordered a craftsman to make up a bell which was lost. If we can make a set of golden bells and ring them on his birthday, it will bring down the house,” a senior court official said.

Bianzhong is an ancient Chinese musical instrument, which appeared as early as the Shang Dynasty (1600-1046 BC). The size, shape and number of bells changed with the times.

Another famous bianzhong is the one of Marquis Yi of Zeng, which was unearthed in 1978 in Suizhou, Hubei Province. It contains as many as 64 bells.

Before the appearance of the golden bianzhong, the musical instrument was often bronze or gilded with gold.

Emperor Qianlong’s instrument was the first bianzhong that is completely made of gold and cost a whopping 13,600 taels (425 kilograms).

The golden bianzhong is made up of 16 bells, which are hung in a wooden frame. All the bells are the same size and at a height of 16.2 centimeters. However, their thickness is different, ranging from 1.2 to 2.1 centimeters, which results in various tones. The bell with a thicker wall can produce a higher tone, while every bell has its own name.

The exquisite bells are cast with an image portraying two dragons playing with a pearl, along with patterns of auspicious clouds and rolling waves. The seal revealing that the treasure was made in the 55th year of Emperor Qianlong’s reign was also inscribed on each bell.

Emperor Qianlong was fascinated by the set of magnificent and sonorous bianzhong.

During big events, such as Winter Solstice Festival, enthronement and wedding ceremonies, the golden bianzhongwas played melodically and enthusiastically.

Settling in the palace for over a century, the treasure was secretly moved to the warehouse of the Yien Yieh Commercial Bank in Beijing in June 1924.

He left the golden bianzhong and other artifacts like jade and porcelains as a mortgage and got a loan — 800,000 silver dollars (today’s US$29 million) , from the bank, which was used to satisfy his extravagant lifestyle. On October 23, 1924, a coup led by the warlord Feng Yuxiang took control of Bejing. Puyi was expelled from the Forbidden City a few days later and moved to Tianjin. He didn’t redeem the golden bianzhong and other treasures.

The news that the bianzhong was stored at the bank was exposed by a newspaper. Many people wanted to own it and tried to inquire of its whereabouts. To protect the national treasure, the senior managers of the bank decided to transport it from Beijing to Tianjin.

However, the bianzhong failed to escape from misfortune when Japanese troops invaded Tianjin in 1937.

The Japanese vice-consul in Tianjin visited Chen Yihou, manager of the Tianjin Bank. He heard through the grapevine that Chen knew of the instrument’s whereabouts. The vice-consul asked people to spy on Chen and even threatened him with a gun and a knife.

Chen was determined to protect the cultural relic despite feeling anxious.

Consulting with Hu Zhongwen, manager of Joint Savings Society Bank in Tianjin, Chen planned to hide the bianzhongin the basement of the society. They bought tons of coal, which was used to cover the treasure.

In 1953, the national treasure finally returned home to the Forbidden City. It is exhibited in the Treasure Gallery at the Palace Museum.

The golden bianzhong’s story wasn’t known to the public until 1981 when Hu spoke about it in an article. So when admiring the beauty of this national treasure in the Palace Museum, don’t forget to appreciate the unsung heroes whose dedication helped to save and preserve the instrument.