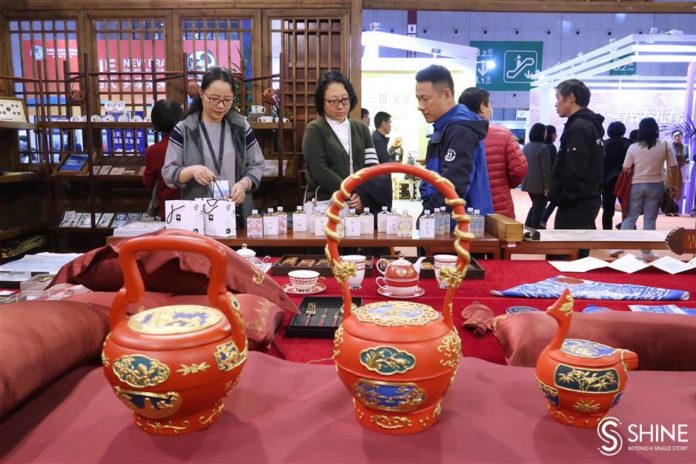 The four-day event highlighted more than 870 cultural and art institutions, attracted almost 130,000 visitors and accomplished a volume of contracts over 5 billion yuan (US$711 million).

The cultural carnival offers business opportunities as a trading platform for museums, libraries, art galleries and art industrial parks throughout the delta region, but also explores the possibilities to integrate cultural resources with tourism.

As one of China’s most developed regions in economy and culture, the Yangtze River Delta, which comprises Shanghai and the provinces of Zhejiang, Jiangsu and Anhui, is pioneering to innovate the way people travel with culture, art and high technology in the digital era. So far, the region’s seven cities — Shanghai, Nanjing, Hangzhou, Hefei, Suzhou, Ningbo and Wuhu — are forging ahead to promote their cultural tourist attractions.

“When I’m walking on the streets of London, New York and Paris, I’m always thinking about what qualities an international city is supposed to have,” said Gu Jiang, vice director of National Research Center of Cultural Industries and professor from Nanjing University. “It’s said you’ve never been to Beijing without visiting the Palace Museum, and the trip to New York without the Metropolitan Museum of Art is a pity. So from my point of view, one important index for a big city is its cultural legacy besides its economic power.” 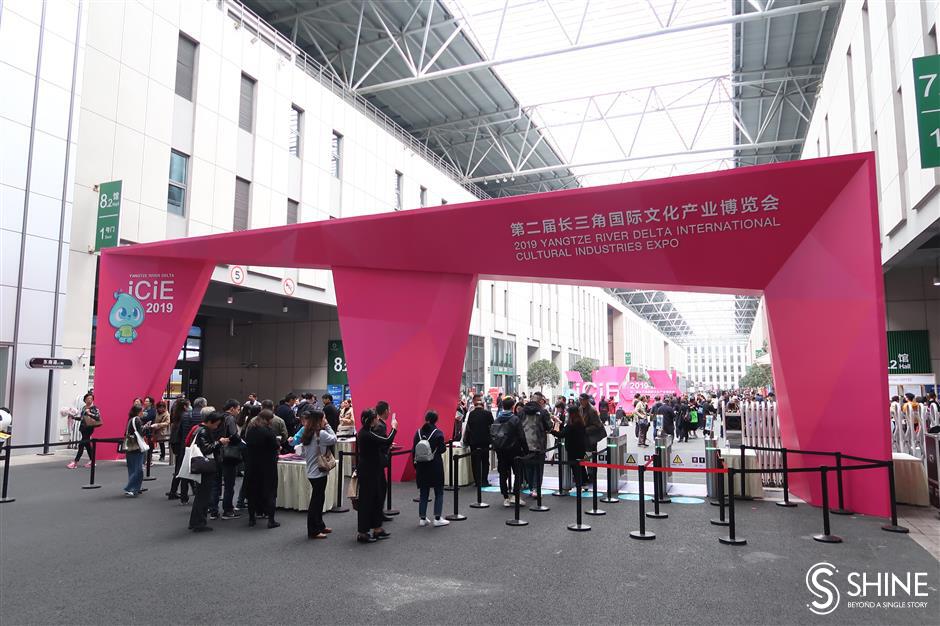 The annual art fair, West Bund Art & Design, held every November at the western bank of the Huangpu River in Xuhui District, has made Shanghai a permanent fixture on the global art calendar. It features more than 100 leading galleries from all over the world, working as a platform for international exhibitors to showcase the finest quality of modern and contemporary art.

This November it launched the first Shanghai International Art Trading Month that showcased 112 art events  by museums and galleries, and the total value of the artworks within the month reached 10 billion yuan.

“Who would remember that about 10 years ago, the place was a dilapidated site of old oil refineries, coal factories, iron works and sand plants,” said Chen Anda, general manager assistant of Shanghai West Bund. “We started the renovation around 2010 and planned to build the place into an iconic zone, which would be comparable to the Rive Gauche (Left Bank) in Paris and the South Bank in London.”

The urban waterfront community has been home to more than 20 cultural and art institutions along its 8.4-kilometer West Bund shoreline, such as the Long, Yuz and Star museums, Tank Shanghai, the Centre Georges-Pompidou & West Bund cooperation program, and the emerging theater cluster, making it the largest art zone in Asia. 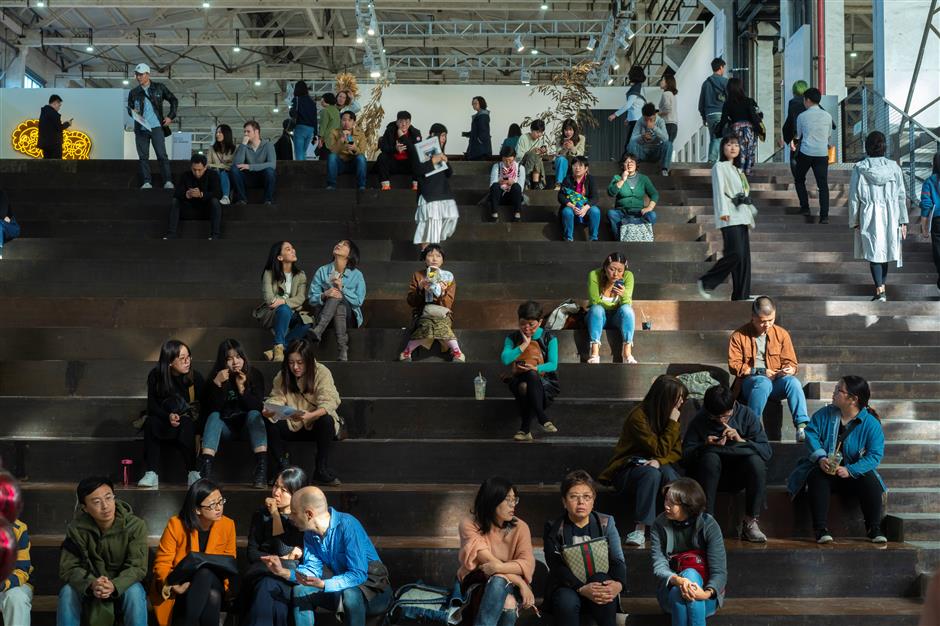 Visitors take a break in the West Bund Art Center, which assembles more than 100 leading galleries from around the world this year.

When Shanghai is mapping its art realm, Wuzhen, an old water town in Zhejiang Province, is turning its stunning backdrop of ancient canals, alleys and traditional buildings into the live stage for theaters.

The Wuzhen Theater Festival is an annual grand celebration of performance art and a hub for cultural exchange held every November. It allows visitors to enjoy mini-dramas in  small lanes, on a stone bridge or in the backyard to an old house.

“We had this idea in 2008 and it was simple: To attract tourists with some fun, interactive culture. But when it grew year by year, we started to give it more thought,” said Qiu Jianwei, vice general manger of Wuzhen Ltd.

“We hope it can be a wide, open stage to showcase the world’s excellent dramas and plays, a good learning environment for local kids to enjoy performances and a nourishing soil for China’s young theater workers to perform. At the same time, it can do something good for the small town’s tourism and cultural development.”

The festival today features different key events, such as Specially Invited Plays, an Emerging Theatre Artists Competition, the Outdoor Carnival, and the Wuzhen Dialogues, among many others. The entire town with a history of more than 1,300 years is transformed into a stage, and theater lovers all over the world are invited to enjoy this tantalizing feast of the theatrical arts.

Over the past seven years, the festival has introduced almost 170 dramas and more than 900 performances. Every year two months before the festival, its 60,000 tickets sell out.

“We’ve charted out our fans based on the ticketing — mostly from the Yangtze River Delta with the most from Shanghai, about 23 percent, followed by three cities of Zhejiang. The majority of the group is aged between 25 to 32,” Qiu said.

The town provides a natural environment for a stage performance, and the audience can enjoy fine dining and wine after a show in the beautiful village.

“In future, we are going to bring this festival out to more places in China with the help of 5G, AI and online live broadcast,” Qiu said.

Wuzhen embraces new ideas to the old town, while Sangua (three gua) Commune in Anhui Province keeps and develops what it already has.

The commune, founded in 2015, is a joint project to develop three villages — Donggua, Nangua and Xigua, with their specialties — folk culture, online trading and traditional food respectively.

“The three villages were even worse than we’d expected when we were there four years ago — almost 70 percent of young people had left the villages,” said Chen Minli, the commune’s director. “So what we were going to do was to restore, reconstruct and revive them.

“We keep their original looks because we think the landscapes, customs and authentic flavor of a traditional Chinese village should be preserved intact.”

After several rounds of fieldwork, the project team teased out the villages’ agricultural products, such as rice, peanut, fish, tea and mineral water, among many others.

The next thing they did was to set up a training center on the site of an old run-down primary school to educate local farmers in e-business on the Internet and share their daily life on social media.

“It’s the way the hidden, remote villages get connected with the outside world. And so far we’re doing well,” Chen said.

Last year Sangua Commune received more than 1.7 million visitors, and almost 400,000 people came to experience how to sow and plough. Events such as photography exhibition, comics fair, summit forums on Internet medicare and online trading are held in Sangua.

“Today the villages have old locals, new settlers, young people, tourists and varied communities, who together rebuild the villages with a sound industrial chain, while still keeping its true look,” Chen said.

‘Cruising theater’ plucks us from our comfort zone