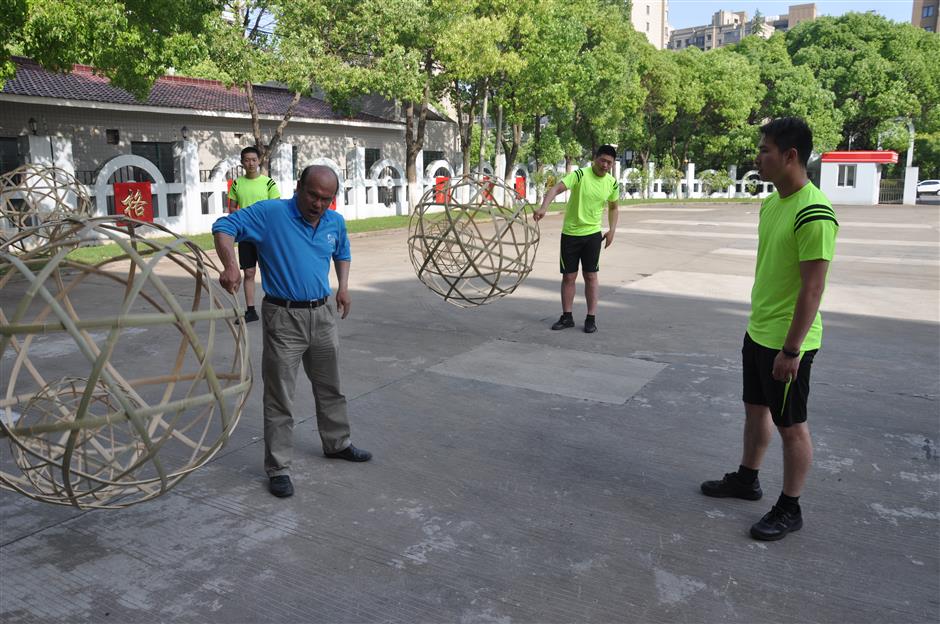 It is said that people living along the coast, as in Fengxian’s case, used baskets made from bamboo strips laden with earth or stones as a defense against flood tides.

When the tides were gone, people turned the baskets into giant hollow balls to swing and roll around, the prototype of the rolling lamp.

The culture was in danger of fading away but some heirs to the tradition have brought it back to life. Wang Zhengrong, 70, one of the fifth generation of rolling lamp inheritors is still active in preserving and protecting the tradition though he should have retired 10 years ago.

In the early 1980s, Wang was an official in Zhelin Town’s culture department when he and his colleagues began to revive the art of lamp rolling.

They collected materials and consulted with old artists on the moves, weaving the lamps themselves and making revisions when necessary.

A rolling lamp has an outer frame made of 12 bamboo strips and contains a smaller bamboo ball inside with the same structure, wrapped in red or black cloth.

So when the lamp rolls, the ball inside will fly like a bird.

Originally rolling lamps had only one size at 1.6 meters in diameter and weighed about 30 kilograms. The activity was almost exclusively for men because of the strength needed to wield the lamp.

The moves, whether on the ground or in the air, require great effort, not only to lift the lamp but also to fly them around.

One very difficult “spider spinning thread” movement even requires the performer to grip the lamp by his teeth.

“Performers have to be completely concentrated and motivated in the process to fully present the vigor of the event,” Wang said.

However, the size of the lamp has been cut somewhat to make the art easier. The diameter of a large lamp is now 1.2 meters, with much of the weight removed.

To improve diversity and also the visual effect, small lamps were developed to involve female performers, showcasing the tenderness and beauty of some movements and adding dance elements.

Later, medium-sized lamps were developed to create more combinations as both men and women could control them.

The occasions where lamp rolling is demonstrated also differ from the old days. 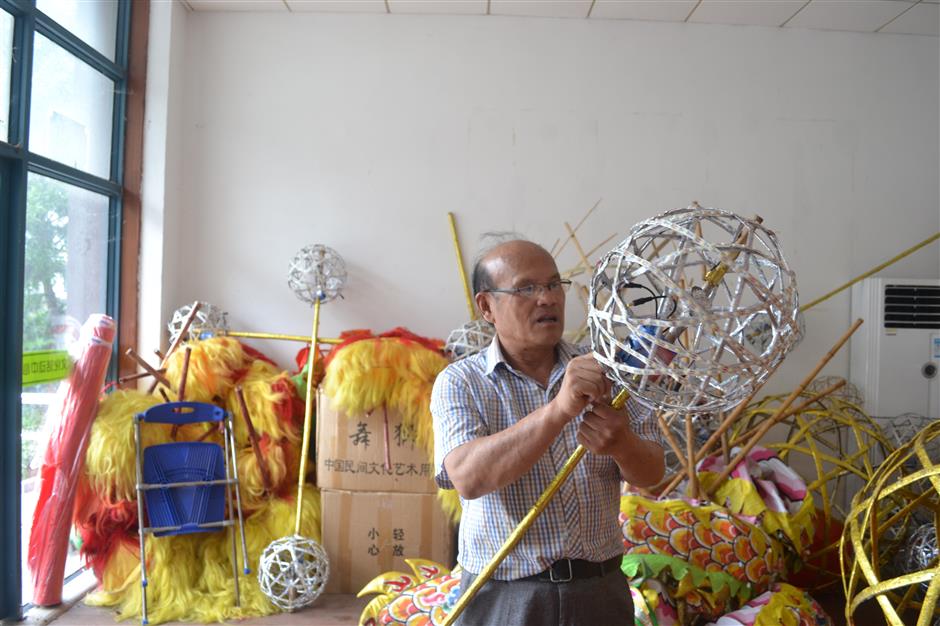 Wang Zhengrong examines a rolling lamp he made.

Whereas in the past rolling lamps were used on ritual occasions to pray for temperate weather and enough rain to ensure a good harvest, events today are more of a traditional cultural activity and for exercise.

In 2007, the Zhelin rolling lamp was included in Shanghai’s intangible cultural heritage and was added to the national list the following year.

Wang said his, and his workmates jobs, are a lot easier than when they started thanks to official support.

To promote the heritage, the rolling lamp has become a competitive event in the Shanghai district’s sports games while events also attract competitors from neighboring Jiangsu and Zhejiang provinces.

There was a seminar on the history and an exhibition showcasing art featuring the lamp.

A highlight was a contest among artists from Haiyan, Taicang and other coastal regions that also have lamp rolling customs. Onlookers would burst into cheers when they saw the heavy lamps being flung high into the air.

Thanks to local government investment, the tradition is better protected but the paradox is that young people have less time to get involved.

From time to time a study session is launched for young people to learn about lamp rolling.

“We recruit eight to 10 students for each session and I think we can find two or three talented ones to give them further guidance,” Wang said.

The learners come from all walks of life, but if any stick it to the end of training, they usually become a part of the regular performance troupe.

“Now I have about two dozen members who would do the performance when invited,” Wang said. “The cultural activity is all about them being on; if they are not being carried out, they will no longer exist.

“Lamp rolling is part of people’s lives in the rural area. When the busy season in the fields has passed, the villagers would need something to fill the time,” Wang added.

The activity has become an inseparable part of local people’s leisure. Line dancers in the square have utilized the small rolling lamp just like other dancers use fans or other items.

Some schools, such as Huqiao School and Green Sun Kindergarten, have added rolling lamp to their curriculums.

In Fengxian, the heritage of the rolling lamp is intertwined with people’s lives. 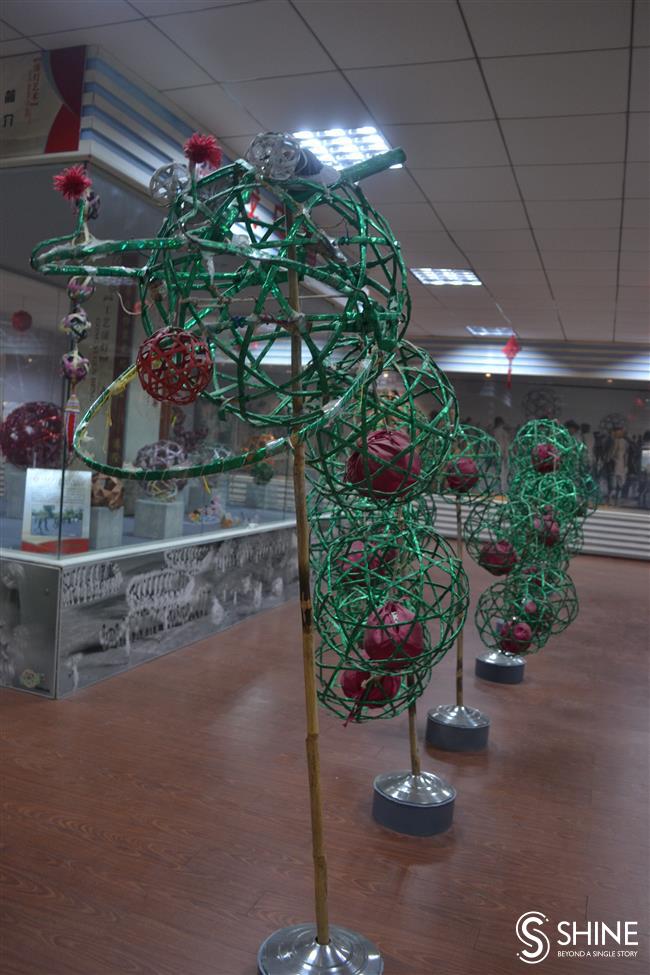 Lamps form a dragon to give more varieties to the performance. 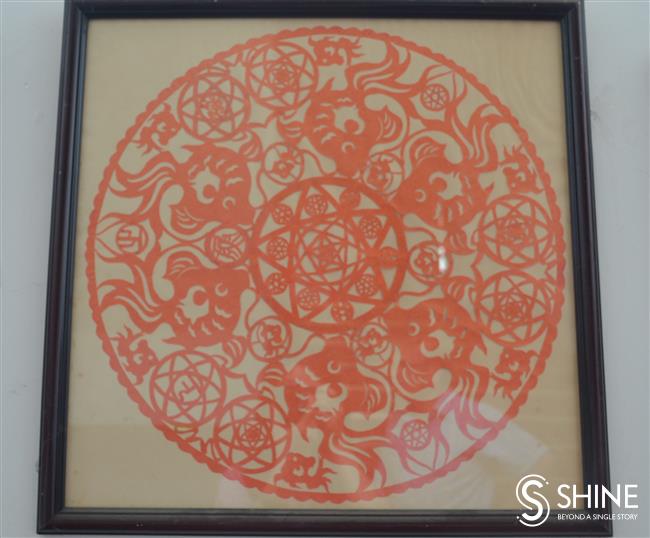