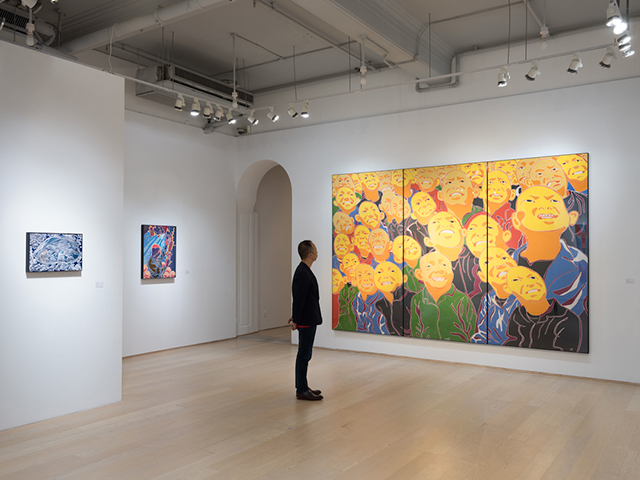 One of the most famous representatives of cynical realism, Fang Lijun (方力钧; born 1963) constantly chooses between “heaven and earth”, between material and spiritual, not only in creativity, but also in life. Being a successful artist, he does not refuse from more “mundane” activities in the form of restaurant business. Why does the artist need a catering network and why are his bald-headed characters.

Fan Lijun (方力钧) was born in 1963 in Handan City, Hebei Province. He started drawing in early childhood, at the age of 17 he entered the provincial technical college of light industry to study ceramics. After his graduation he decided to continue his studies and entered the Central Academy of Arts in Beijing for the engraving department. However, it was his fame that brought him fame, to which he was carried away in the Academy.

Like many young artists in the mid-1980s, Fan Lijun was read by the works of Western philosophers that poured into China, where he tried to find answers to questions that worried Chinese society during the period of drastic changes. Nevertheless, attention to his work began to attract in the 90’s – cynical realism became a kind of reaction to the disappointment that the Chinese intelligentsia experienced after the events of 1989. The image of a bald man selected by him symbolized the whole of society as a whole:
“Where did the image of a bald man come from? There are several reasons for this. The first is psychological. At that time, I was a manic devotee shaving my head. The second is experimental. The first image of bald appeared on senior college courses. Then I tried everything, and it was part of the experiment. And when the work diverged, the first thing I discovered was how powerful they are visually. And finally, the image of a bald man is ambiguous. It is unclear what kind of person he is and what position he takes. This was the most adequate way to express my protest. ” 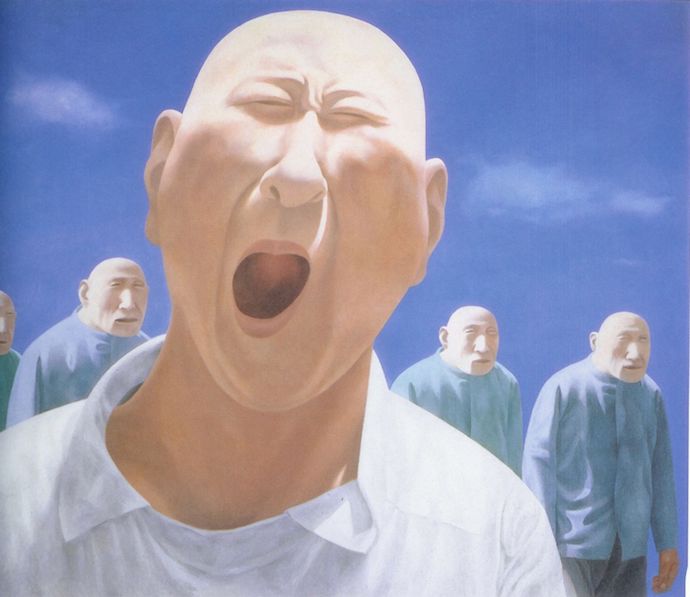 Gradually, the direct protest, which was read in the works of Fan Lijun in the early 1990s, dissolved in a more complex understanding and reflection of reality. Since the late 90’s, the interpretation of his work has become much more complicated: everyone could see and evaluate their content in different ways, based on their psychological state and context. And, according to Fan Lijun, the changes in his work are not only subjective, they also reflect changes in the tasks that face the artist.

“In the early 90’s, artists in China were important for expressing different opinions, they were people who could resist the system, able to say” I do not agree with this point of view “or” I do not want to live like everyone else. ” Perhaps, it was their most important task, and the means for its implementation did not matter. Now, I think, the most important thing for artists is to disperse the fog to allow us to see the actual state of the individual or our reality. ”

In the 2000s, Fang Lijun’s reality acquired a new facet: in addition to his creative activities, he decided to do business and, together with his partner, opened a restaurant in Beijing, which in a decade turned into a small network. It would seem, why a successful artist, whose works are exhibited at Christie’s auctions, open a catering establishment? It turns out, just to feel like a part of society:

“The artist’s life is also full of traps. The artist spends all the time in the studio, where he makes decisions, so it’s easy to go crazy like Van Gogh or lose touch with reality. This is a huge trap for me. I want to practice art as a normal member of society, and not a patient clinic for the mentally ill. Therefore, I hope to maintain a normal healthy connection with society. Since the opening of the restaurant, I have become more of a “bourgeois”, I have to keep accounting records to understand whether something brings profit or leaves me at a loss. Only by keeping constant counts, I can stay afloat. For me, the meaning of owning a restaurant is that it allows me to escape from the studio and feel in the skin of an ordinary person, not an artist. ”