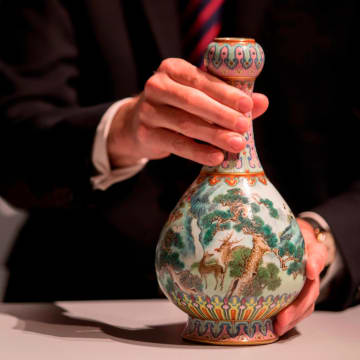 Share on Facebook
Tweet on Twitter
A French family made the discovery everyone who cleans out their attic secretly hopes for: a priceless work of art overlooked for decades.
After finding an intricately decorated porcelain vase in an old shoebox, the owners took it to Sotheby’s Paris to be appraised, whereupon the auction house told them it dated from the Qing dynasty, and could be worth upwards of $600,000.
According to Sotheby’s, the vase was left to the grandparents of its present owners by an uncle, in a will which also included several other works of Chinese porcelain, and some Japanese artworks, including an “unusual bronze mirror” which will also be sold at auction at the same time as the vase. 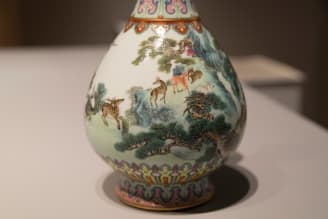 Sotheby’s expert Olivier Valmier said in a statement that on opening the shoebox he was “immediately struck” by the quality of the item, which he said was a Yangcai Famille-Rose porcelain vase bearing a mark from the reign of the Qianlong Emperor, who ruled China from 1736 to 1795.
“The vase is of exceptional rarity: the only known example of its kind,” Sotheby’s said. “Famille Rose porcelains of the period (or yangcai porcelains, as they are known) are extremely rare on the market, with most examples currently housed in the National Palace Museum in Taipei and other museums around the world.”
In April, a Famille-Rose porcelain bowl sold in Hong Kong for over $30 million, the auction house said.
Despite its rarity and potential value, the current owners weren’t originally very keen. “We didn’t like the vase too much, and my grandparents didn’t like it either,” one of them told Agence France-Presse.
Henry Howard-Sneyd, Sotheby’s chairman of Asian Art for Europe and the Americas, was optimistic about future such discoveries.
“Chinese art has been admired and collected across Europe for centuries, but the importance of certain pieces is occasionally lost over time,” he said in a statement.
“Given the huge appetite for Chinese art among today’s collectors, now is the moment to scour your homes and attics, and to come to us with anything you might find!”