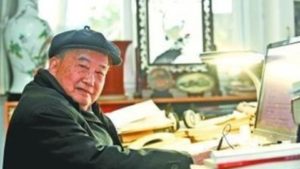 Liu Xuyi, a Chinese historian and specialist on American history, has died at the age of 105 in central China’s Hubei Province.

Liu is best known as co-editor-in-chief of the six-volume “General History of the United States,” a project that begun in 1978 when China started opening up and reform.

It was also the year when the American History Research Association was established, of which Liu served as secretary-general.

It took 24 years for the entire collection, involving more than 30 contributors, to be published. Liu was mainly in charge of Volume 5, “Franklin Roosevelt Era,” and Volume 6, “Postwar American History.”

In 1945, Liu arrived at the University of Chicago for a two-year master’s program in sociology and returned to his hometown after graduation to teach at Wuhan University. He continued to read and write about American history after retiring from the university.