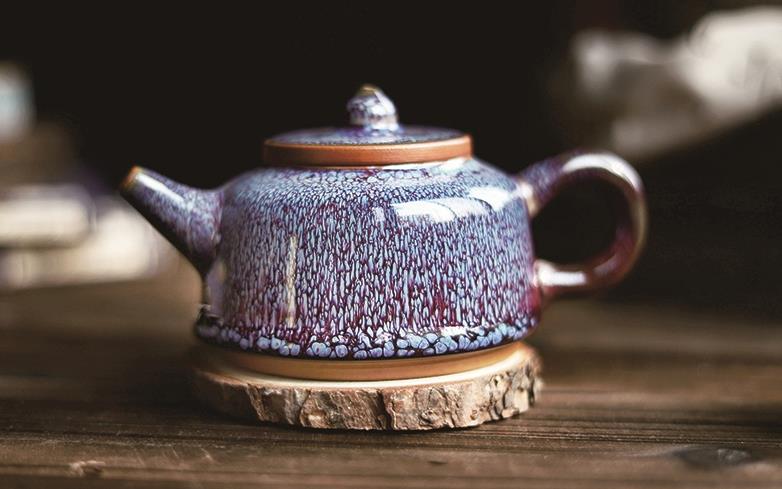 Ceramics in China have always been society’s most valued artefacts. Jun is one of five great kilns dating back to the Song Dynasty (960-1297).

Famed for its striking thick opaque blue glaze, Jun ware is reputed as a treasure of the country.

Emperor Huizong (1082-1135) was a gifted artist and calligrapher. The emperor’s pursuit of art allowed the popularity of Jun ware to reach its peak, attaining a valuable status.

According to legend, Emperor Huizong was captivated by the beauty of a piece of Jun ware at first sight. “Exquisite! What an extremely rare treasure!” he said, when examining the intricate details and colors of that masterpiece for the first time.

Standing at 15.8 centimeters tall, this rose-purple-glazed flower vessel is a type of Jun ware from the Song Dynasty.

It resembles a six-petalled mallow blossom. The interior is glazed with light blue, while the exterior a brilliant shade of rose-purple. It is currently exhibited in the Palace Museum in Beijing.

Jun ware was made at kiln sites in Shenhou town, Yuzhou, in central China’s Henan Province.

The glazing and firing technique of Jun ware is said to be discovered by a potter named Li and his son.

With a small kiln store, the family made everyday vessels such as bowls and plates for folks.

One day, when Li’s son opened the kiln to collect a batch of completed Jun wares, he astounded by what he found. In the kiln was an elegant, eye-catching porcelain of rose-purple glaze.

He shared the surprise with his father. Li was in shock — he had never seen such exquisite porcelain colors in his entire life. Instinctively, he thanked the Kiln God for bestowing to him such a miracle.

Yet, after days of trying to recreate such porcelain, it all came to naught.

Li then thoroughly searched the area around the kiln, hoping to discover a clue. He finally discovered loose metal powder in a corner.

It had been raining the past few days. Li found out that his son invited a smith in to take shelter from the rain. While repairing a cooper basin, the technician had unintentionally left behind copper powder.

Li set to work again — this time intentionally adding copper powder to his ceramics. At last, he was able to produce a flower vessel, glazed with elegant colors.

The news spread fast and soon everyone began firing their porcelain with metal powder.

Instead of single-colored ceramic wares, different colors can be achieved by controlling the oxidation of the metal in the clay.

Colorful glazes of turquoise and purple are common in Jun ware.

Passionate about gardening, Emperor Huizong had an imperial garden.

It was an elaborate manmade garden with unique flowering plants and rocks from all over his empire.

To host the rare plant species, the emperor encouraged the production of Jun ware.

However, only 36 fine Jun porcelain works was to be produced per year.

The works underwent a strict selection. Porcelain with inferior quality were destroyed to prevent it from falling into the hands of folks.

The high imperial standards set for Jun ware made it extremely precious.

It is likely that the Mallow-Shaped Flowerpot with Rose-Purple Glaze underwent such stringency too.

The foot has two inscriptions — “Palace of Established Happiness” and “Use among bamboo, stones and rockeries.” It indicates the function and use of the flower vessel. The number 7 is also found carved onto the bottom.

Jun ware is numbered to indicate size, with 1 being the largest and 10 the smallest. The numbers are likely to have helped the workers order the matching sets.

The idea of numbering Jun ware is associated with a kiln superintendent named Yang.

He had carefully selected 36 sets of flower vessels, sending them to the palace for stringent screening.

The official in charge scrutinized the flower vessels.

Noticing the official’s beady-eyed look, Yang was afraid his porcelain would be rejected.

What Yang did not know was that the official he encountered was corrupt.

He wanted to create trouble for Yang who did not bribe him with gifts.

The corrupt official was unable to find fault with the porcelain.

Yang’s 36 sets of flower vessels passed the imperial standards and were presented to Emperor Huizong.

The emperor was enraged upon seeing the flower vessels because large flower pots were fitted with small saucers and vice versa.

The unfitting sets were presented to the emperor, which was deliberately messed up by the corrupt official.

Luckily for Yang, one of the emperor’s ministers proposed to call upon the kiln superintendent for an explanation. Upon arrival, Yang rearranged the flower vessels to the right pairings, earning the emperor’s approval.

Yang was afraid that the corrupt official would make things difficult for him the next year.

He met an old man and treated him to a meal out of pity. Before the old man left, he advised Yang to inscribe numbers onto the saucers.

This ensured that the flower vessels would not be muddled up again.