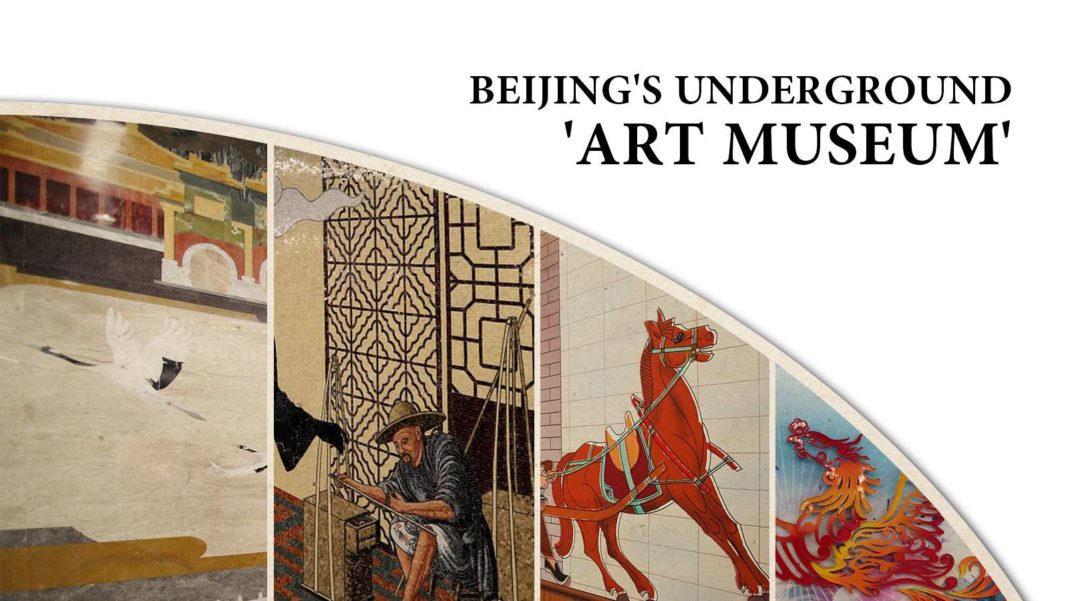 Going underground is an easy way to have a taste of Beijing culture. As the transportation network expands wider, subway art has also become more varied and diverse.

Covering more than 500 kilometers with over 300 stations, Beijing subway lines see several million people come and go every day. However, people are often rushing past the long corridors, stuck on their mobile phones without even noticing the tiled murals, sculptures, and all kinds of art on display.

When Subway Line 1, the first subway line in Beijing opened in 1969, the metro primarily served as an expansion of the city’s transport system and was used for civil defense. It was not until 1984 that murals were introduced to Subway Line 2.

The initial attempts of incorporating art into the subway systems were made by famous contemporary artists in China, and most presented the country’s landscape and history. 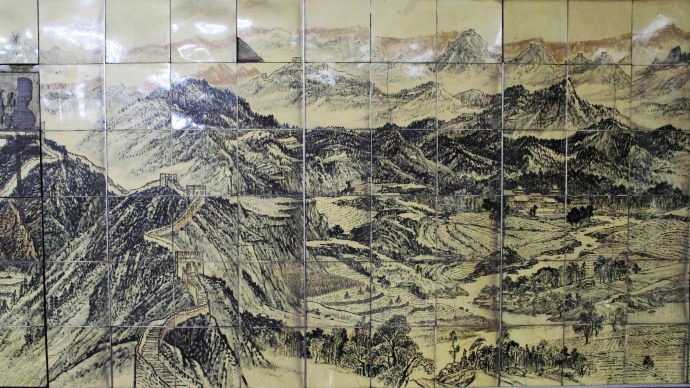 Part of ‘Yanshan and the Great Wall’, the mural in Xizhimen Station. /Sina Photo

In 1984, Subway Line 2 opened as a project to celebrate the 35th anniversary of the founding of People’s Republic of China. In the same year, two 70-meter long murals were installed on the walls of Xizhimen Station. The designer Zhang Ding, who participated in the design of the national emblem of China, helped create art that depicted the grand view of the Great Wall and the Three Gorges area of Yangtze River with his team. 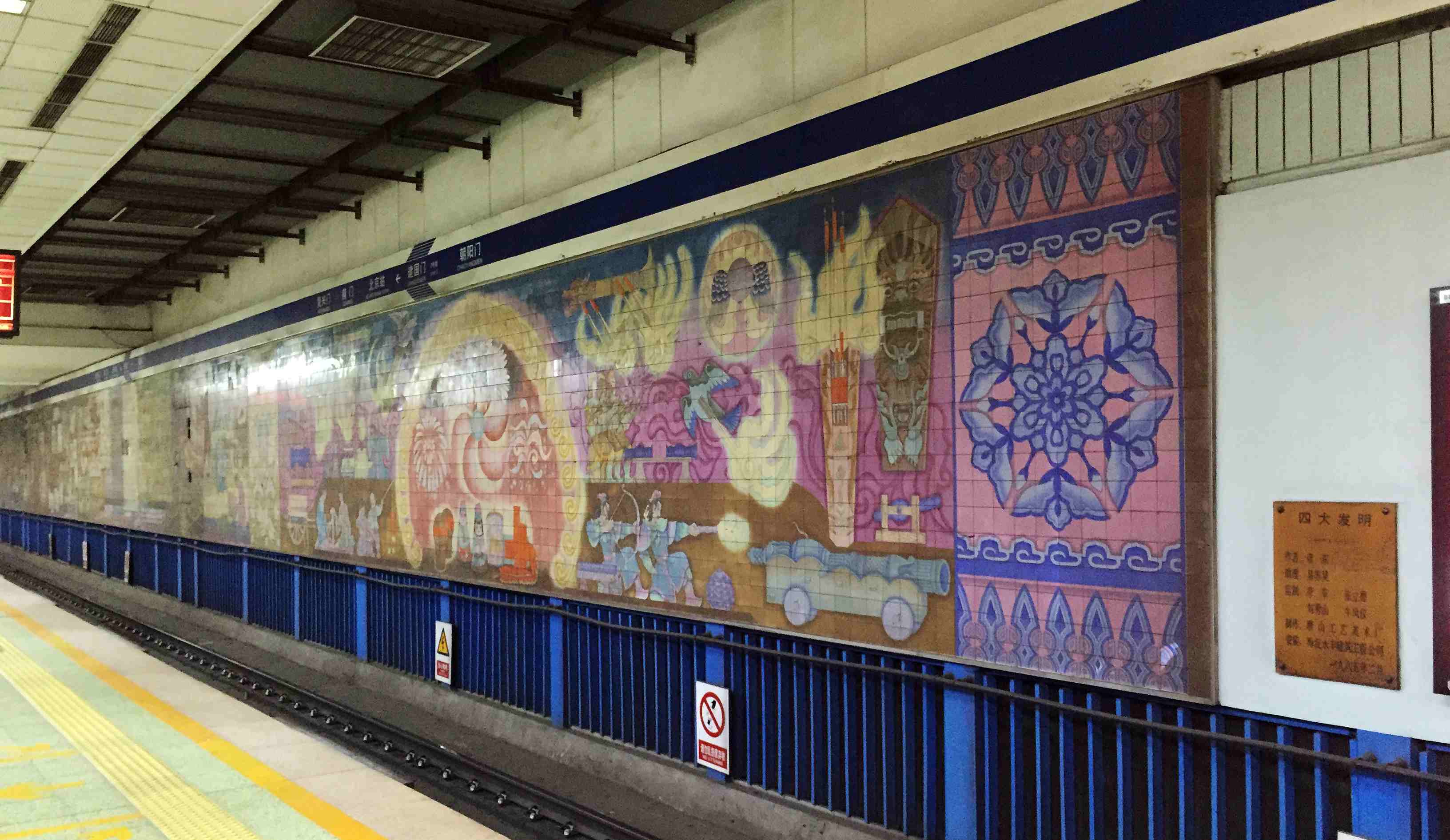 In 1985, a year after Xizhimen’s murals, Jianguomen Station was decorated with two giant mural paintings, “History of China’s Astronomy” and “Four Great Inventions.” Made up of over 3,000 pieces of colored tiles, the well-designed murals tell the stories of heroes and inventors in Chinese history. 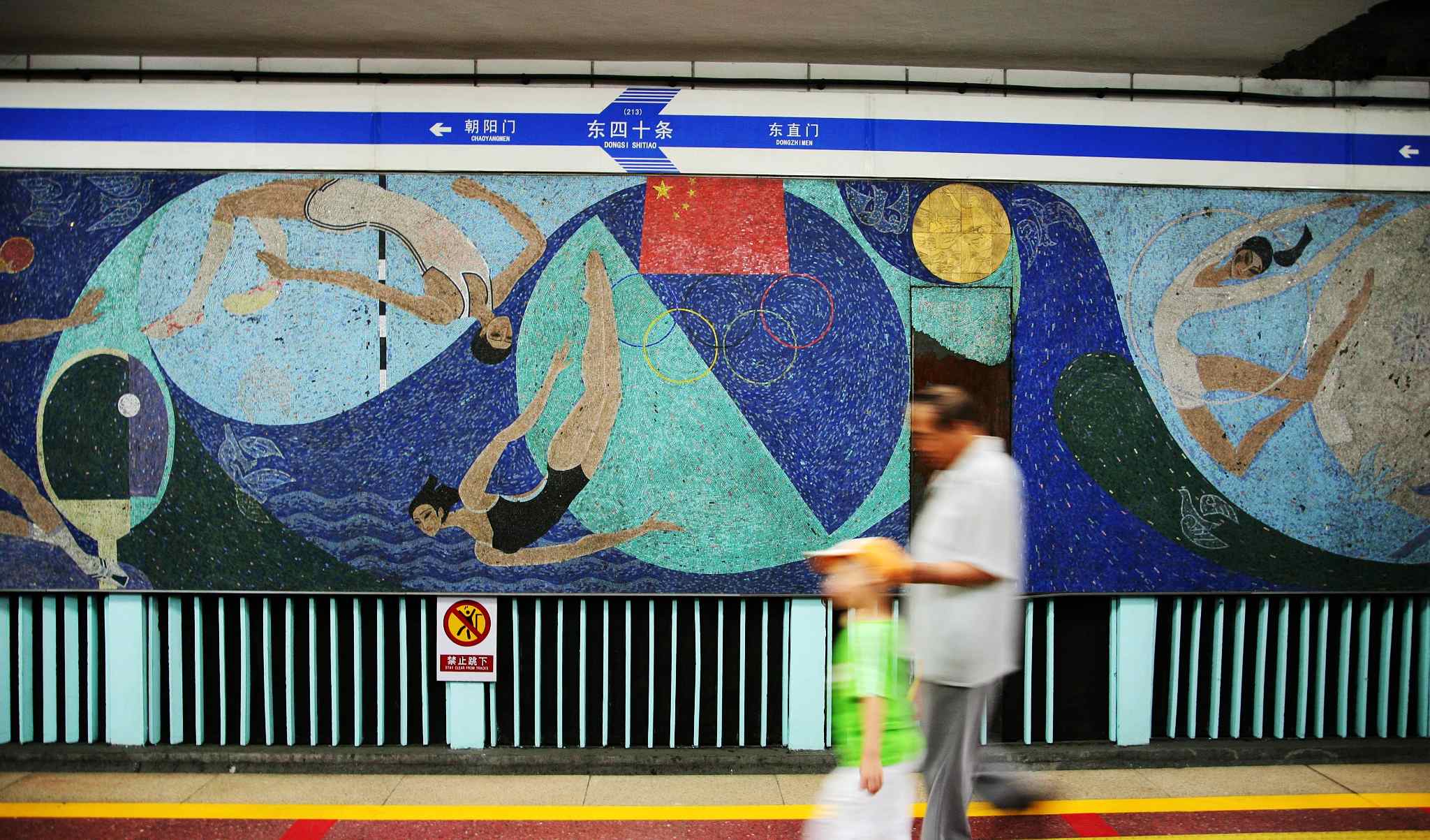 Dongsishitiao Station, close to the landmark of the Worker’s Stadium, adopts tiled murals to represent  sportsmanship. “The Glory of Huaxia,” a 62-meter long porcelain panel painting, pictures over 30 historical figures practicing martial arts. The modern version at the other side is called “Head to the World,” showing body movements of competitive sports nowadays.

When Beijing was confirmed as the host for the 2008 Summer Olympics, the construction of subway lines enjoyed a boom. More art forms of subway murals were created, with each echoing the landmark above ground close to the stations. 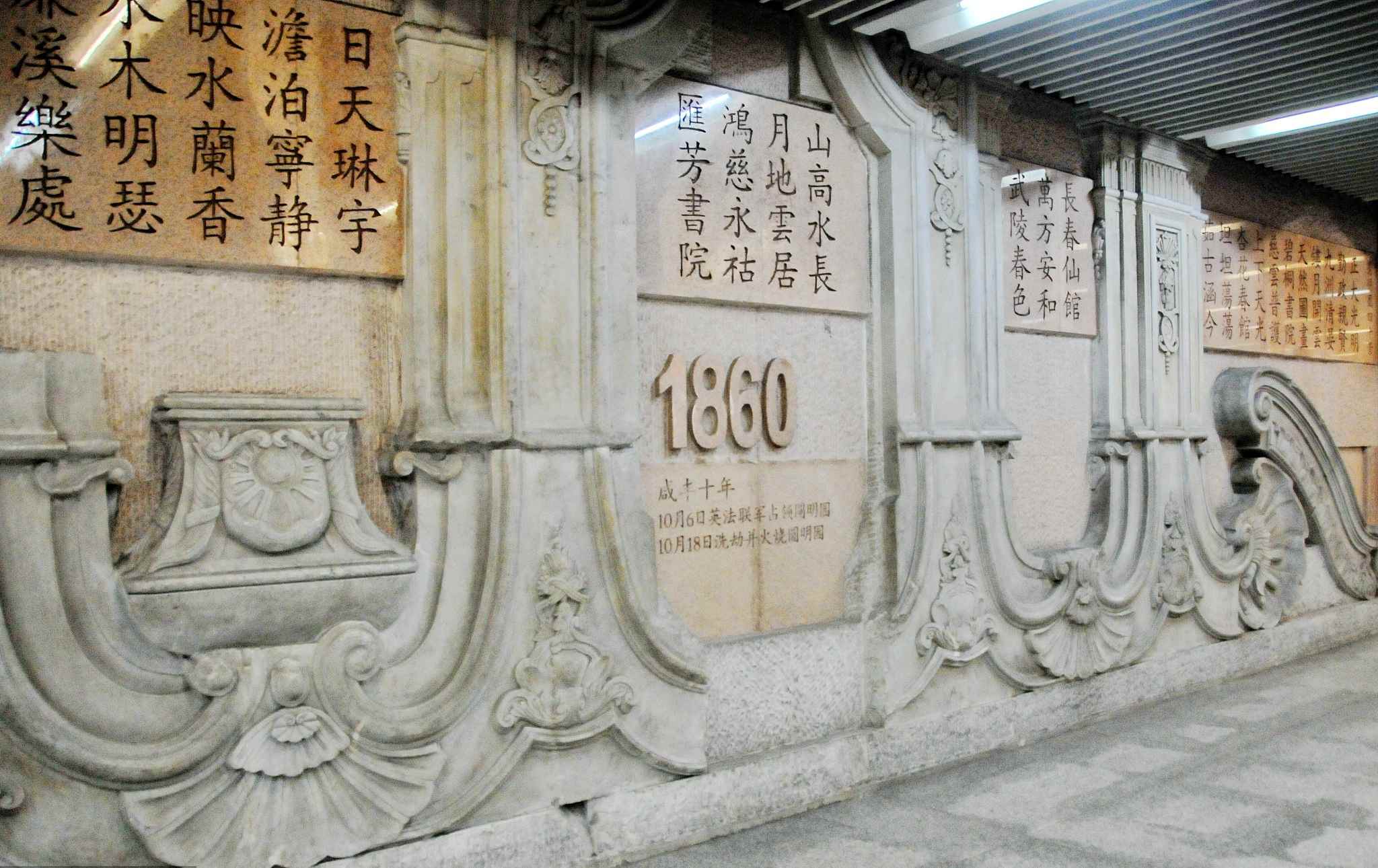 On the wall of Yuanmingyuan Station, the large mural combines relief sculptures of the ruins found inside the park with Chinese calligraphy describing the event. 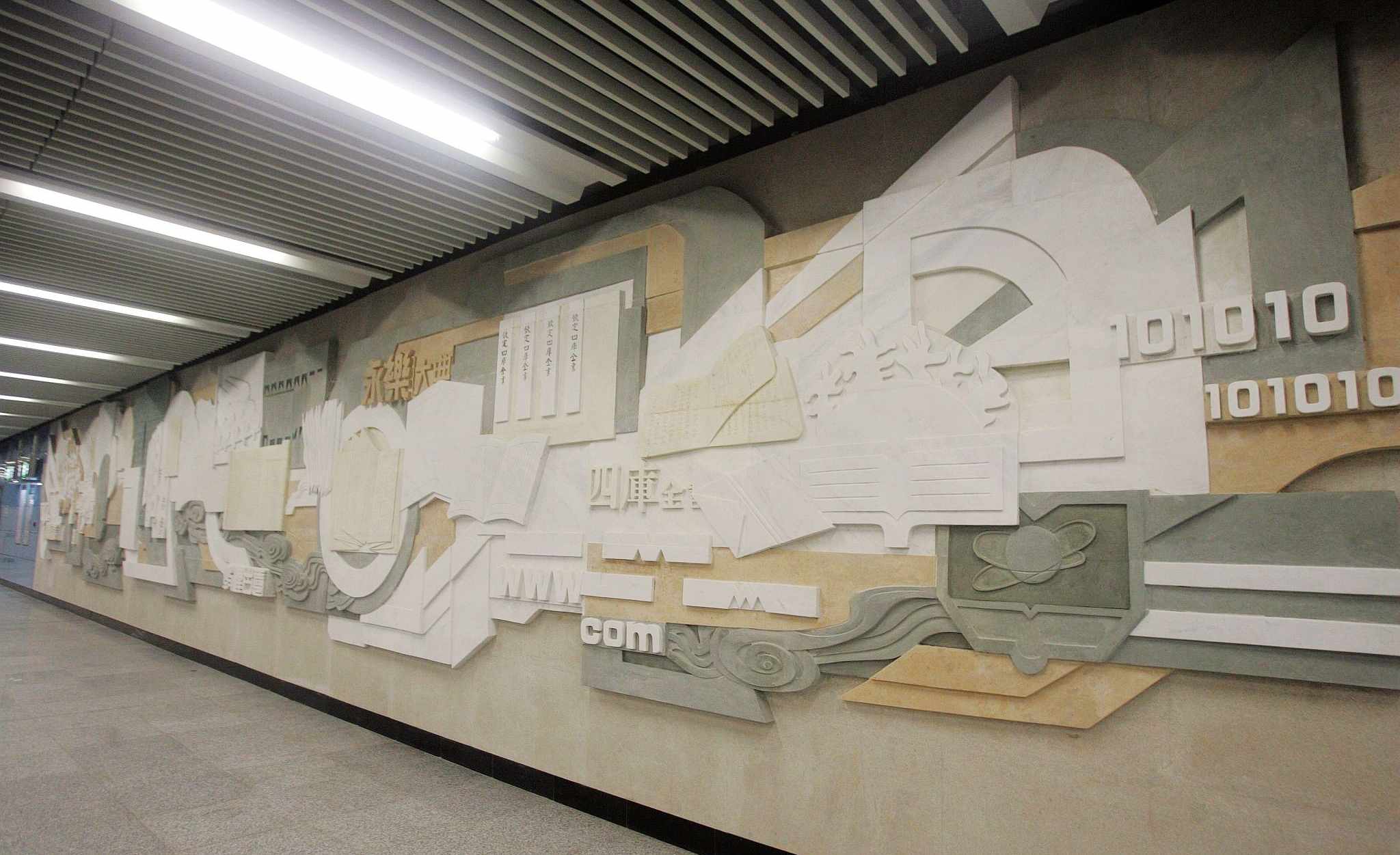 According to the design plan, each subway line has its own theme.

For example, Line 10 connecting Beijing’s business and recreational areas is themed “colorful new life,” while Line 6, running from north to south along the central axis, focus on Beijing’s local culture and lifestyle. 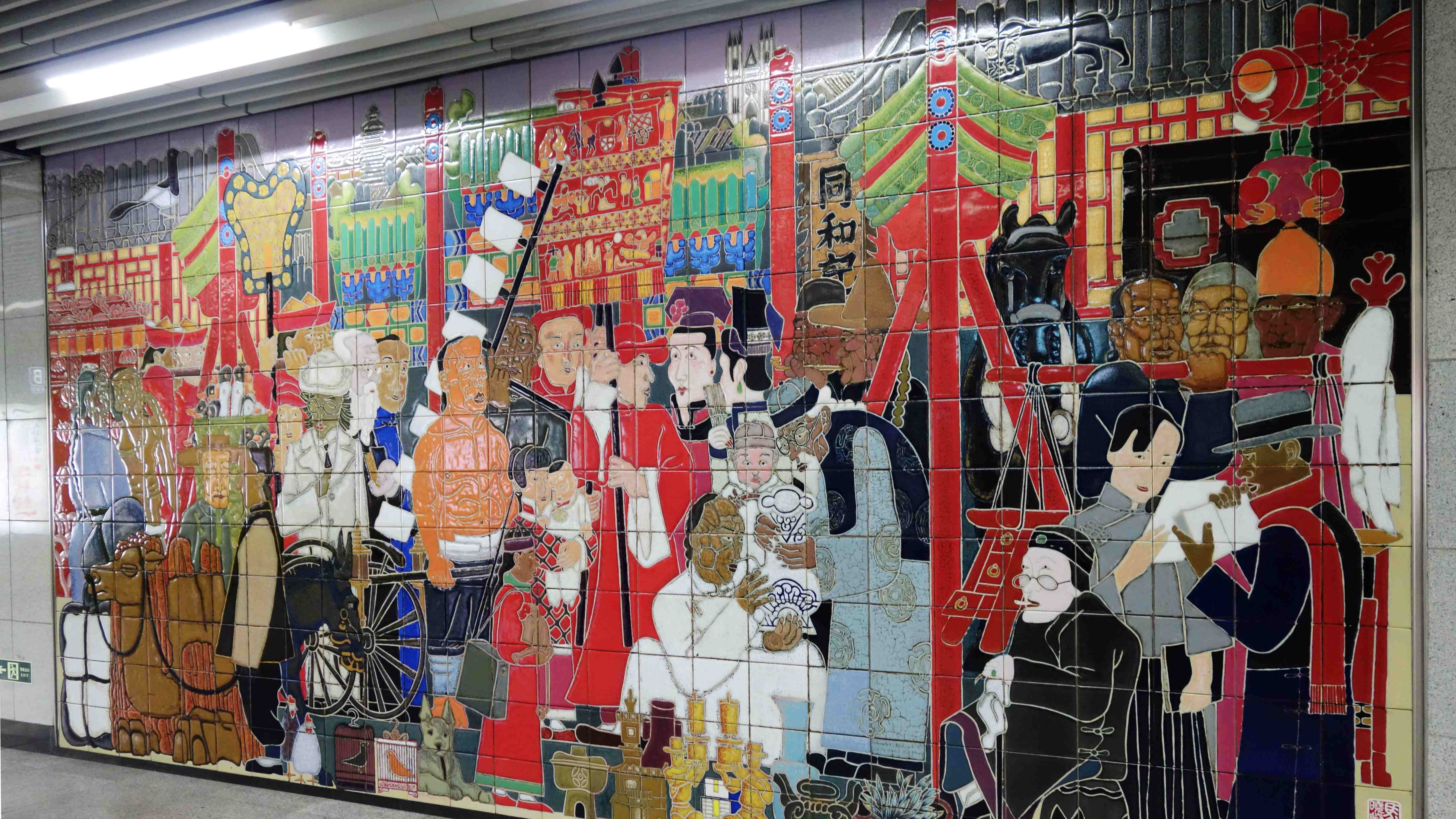 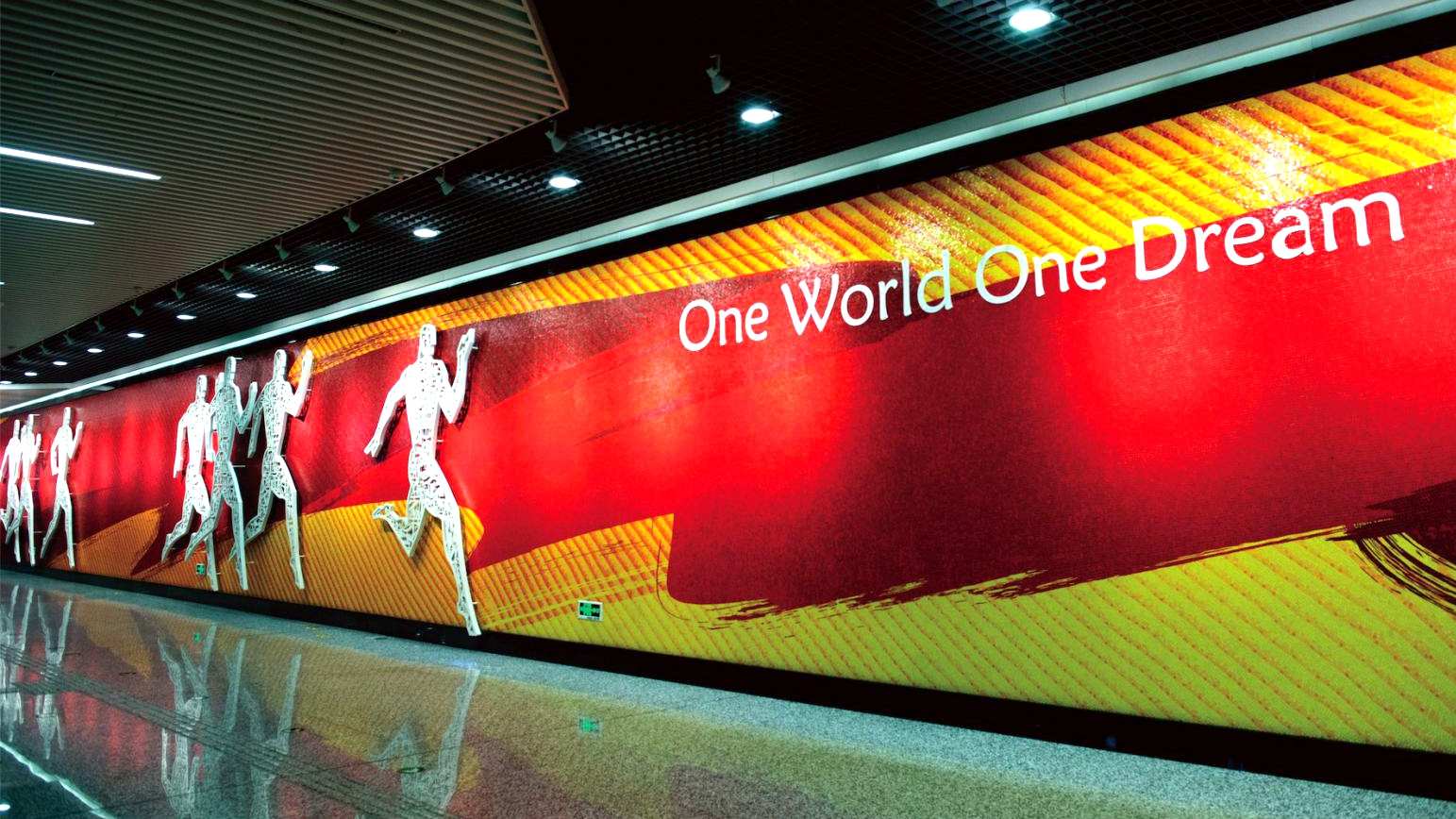 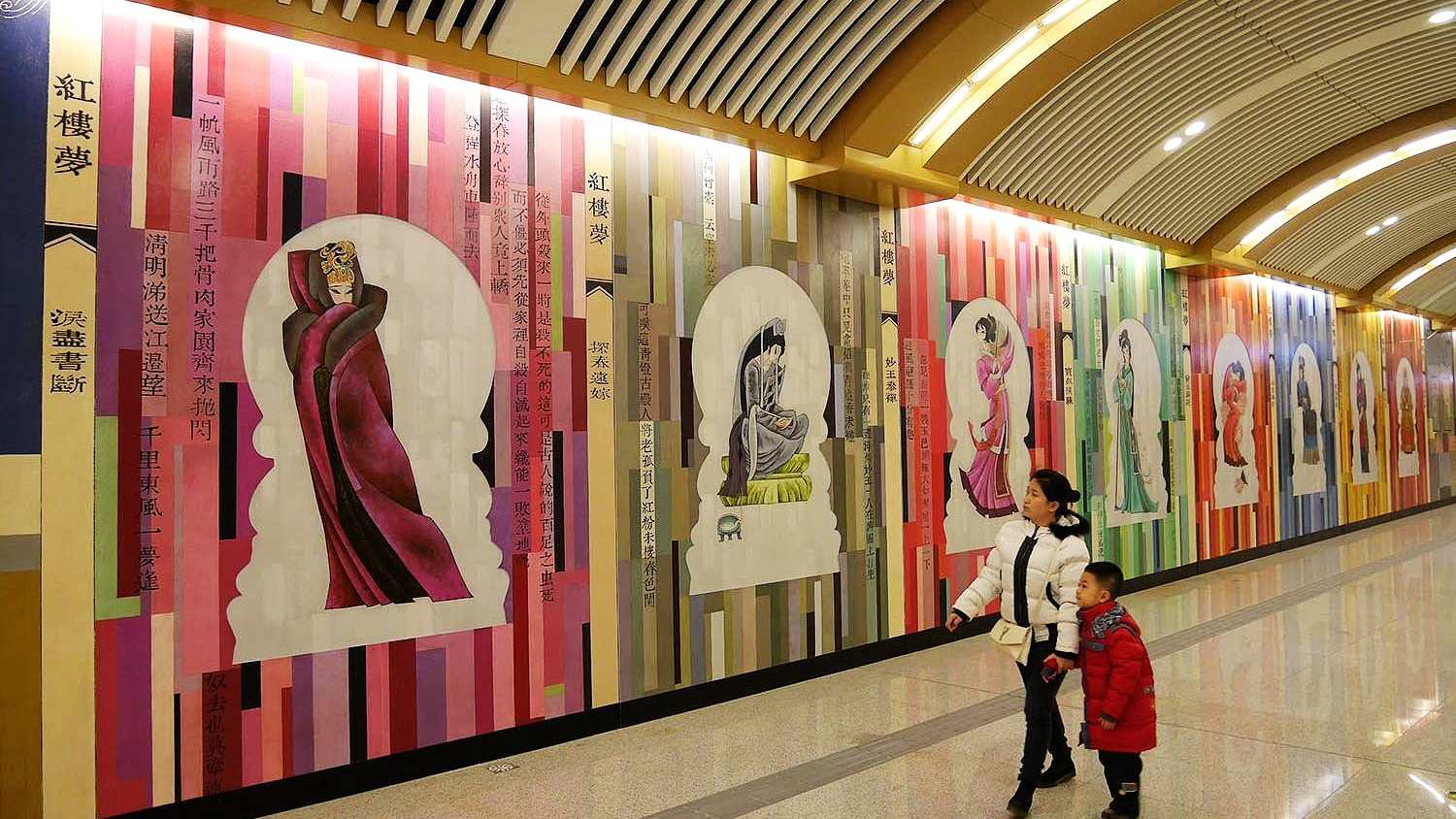 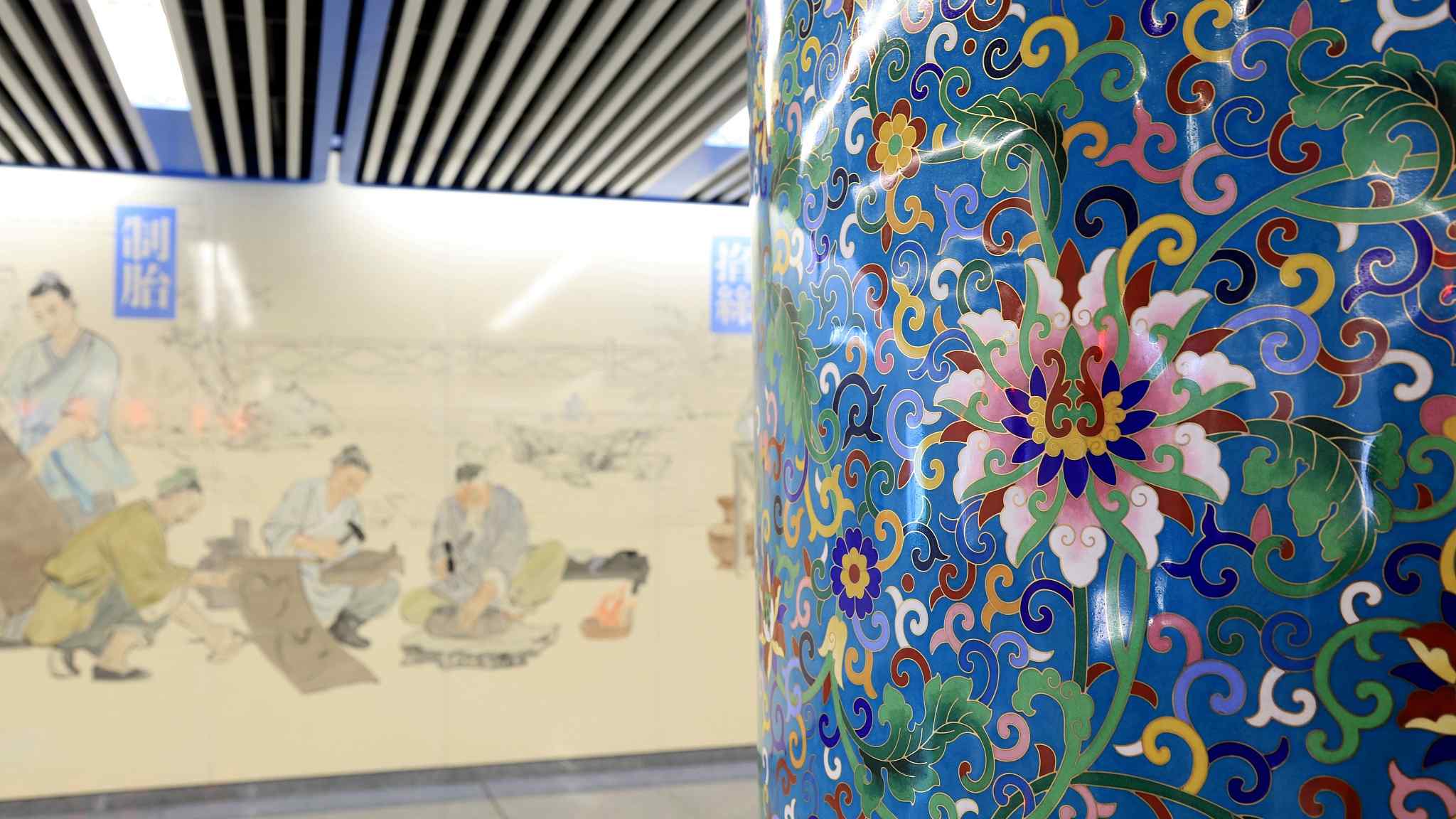 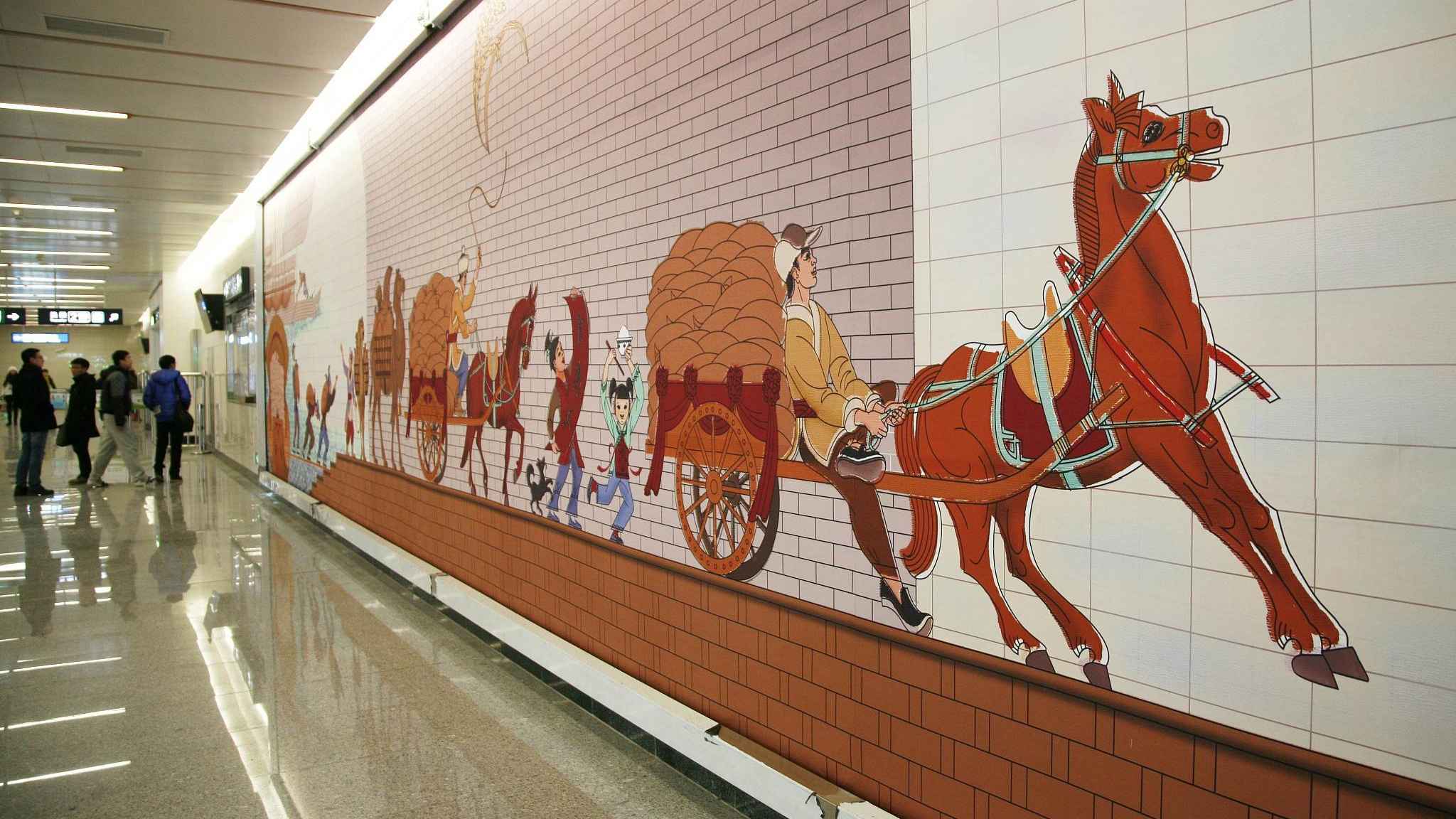 The materials of subway murals also experience changes through time. After three decades, old murals on Line 2 are getting darkened in color and the tiles are broken with age. But due to its special place and loss of mold, it’s almost impossible to restore the work to its original state.

Novel materials have been applied to the new lines, like color glasses, metal bricks, and LED lights. On Subway Line 6, Beihai North Station even uses 50 kinds of stones from more than ten countries to display “Beihai Park in Spring,” a 100-square-meter fresco. Part of the mural in Beihai North Station. /VCG Photo

Another typical example is Nanluoguxiang Station on Line 8.

Titled “Memories of Beijing,” the entire design uses over 3,000 amber glass unit cells, and inside are old treasures provided by people living in Beijing: food stamp, thimble, old tickets, all kinds of commemorative objects. People can scan a QR code next to each treasure, gaining access to the stories behind them. 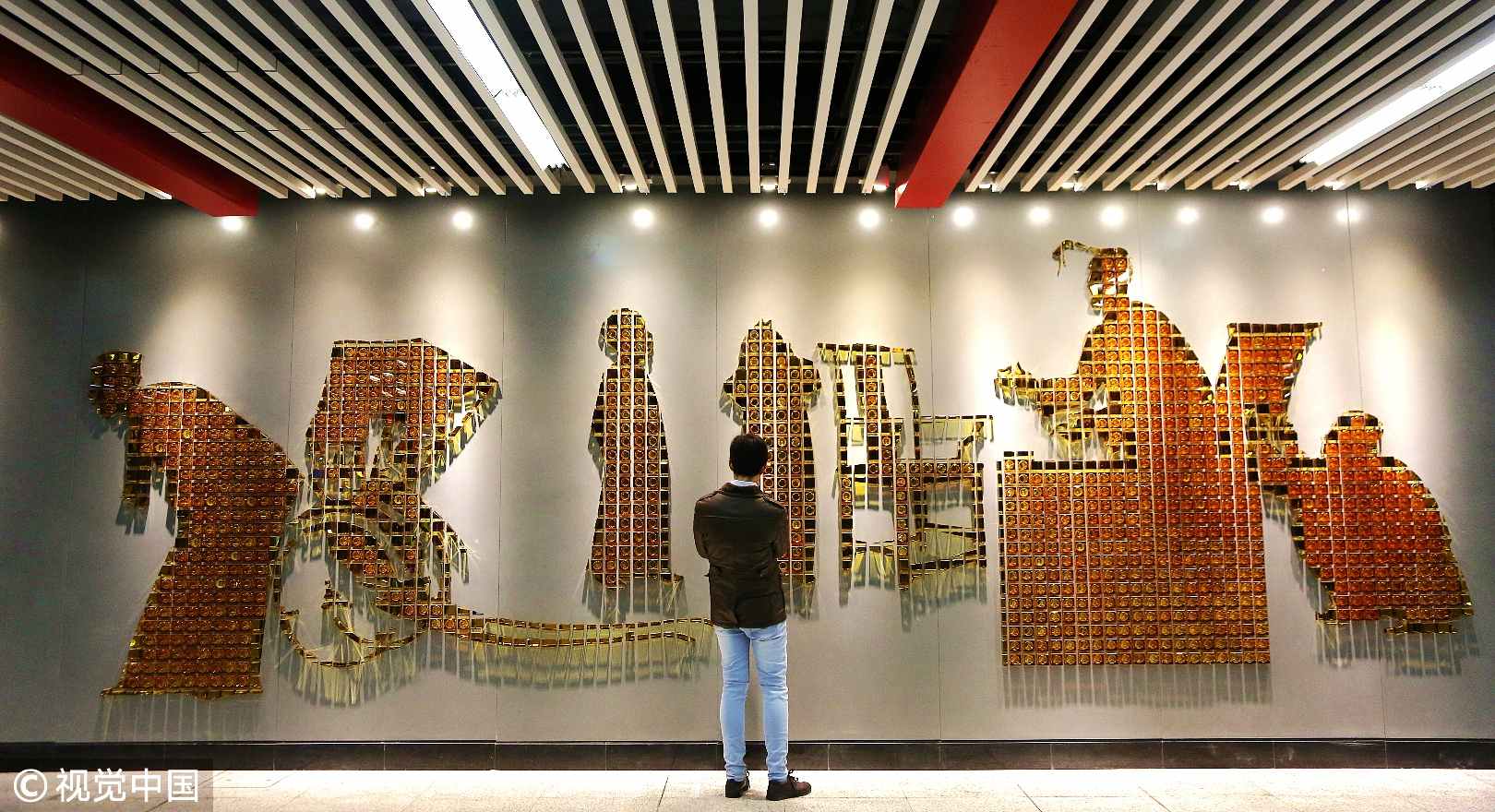 Old treasures inlaid in each unit of the decoration in Nanluoguxiang Station, Line 8. /VCG Photo

Underground art gallery in the world

Stockholm’s metro system is dubbed the world’s longest art gallery. More than 90 percent of its stations exhibit immersive art and designs, engravings and relics from over 150 artists. In Russia, Moscow’s stations are decorated with Baroque elements, including chandeliers, delicate marble, and tile work, while Toledo Station in Naples, Italy created a blue starry sky by mosaic decorations. 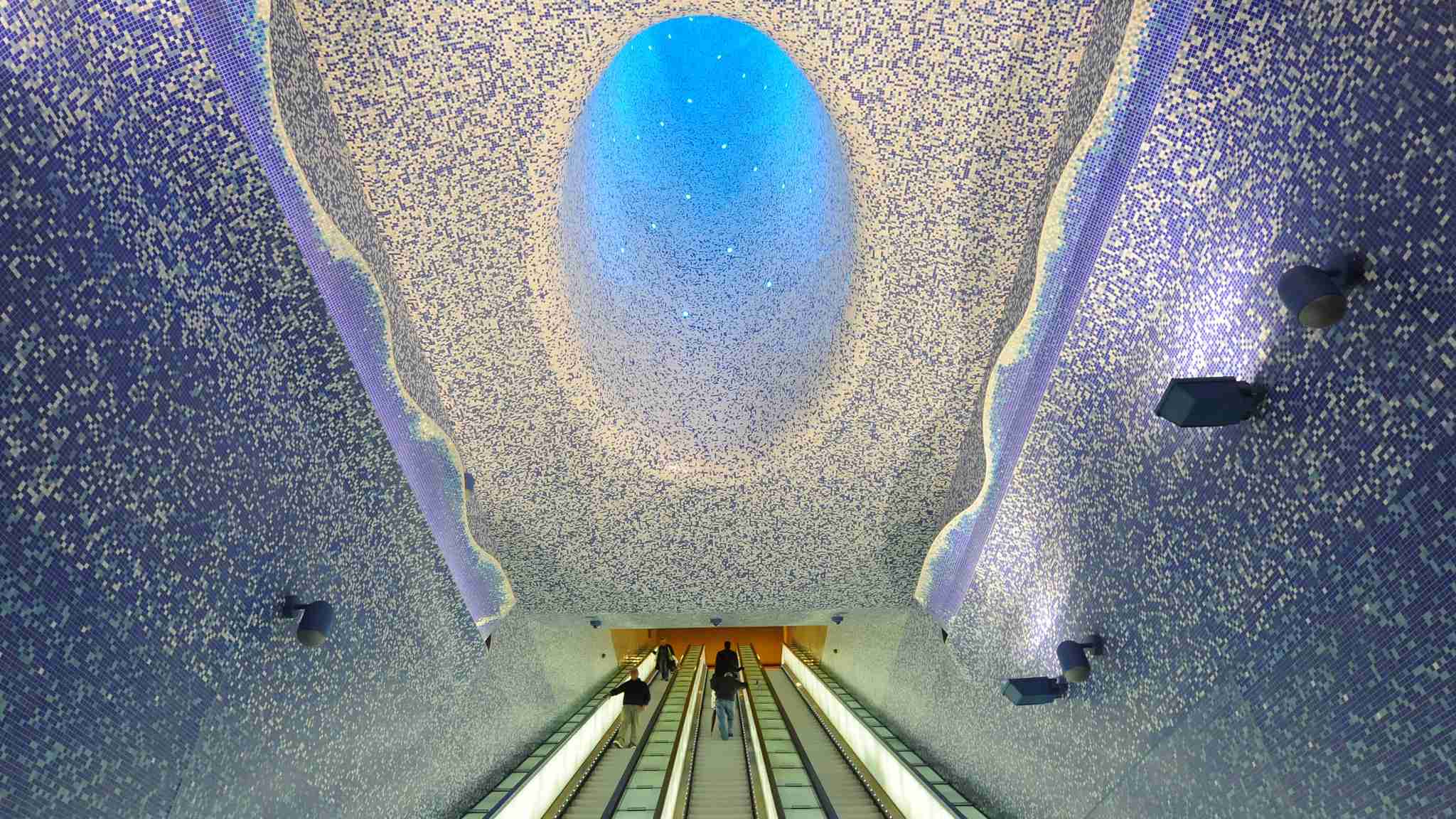 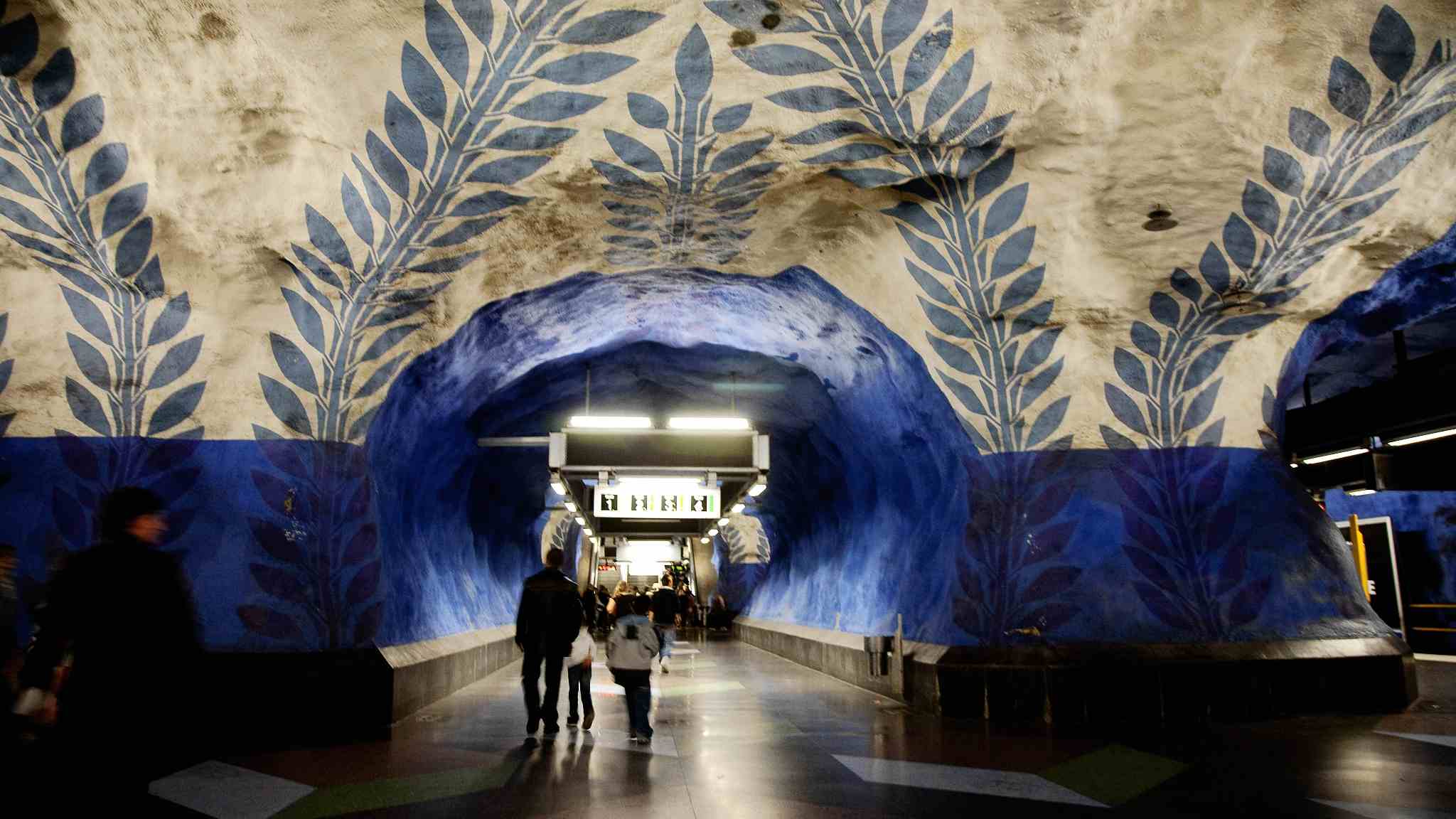 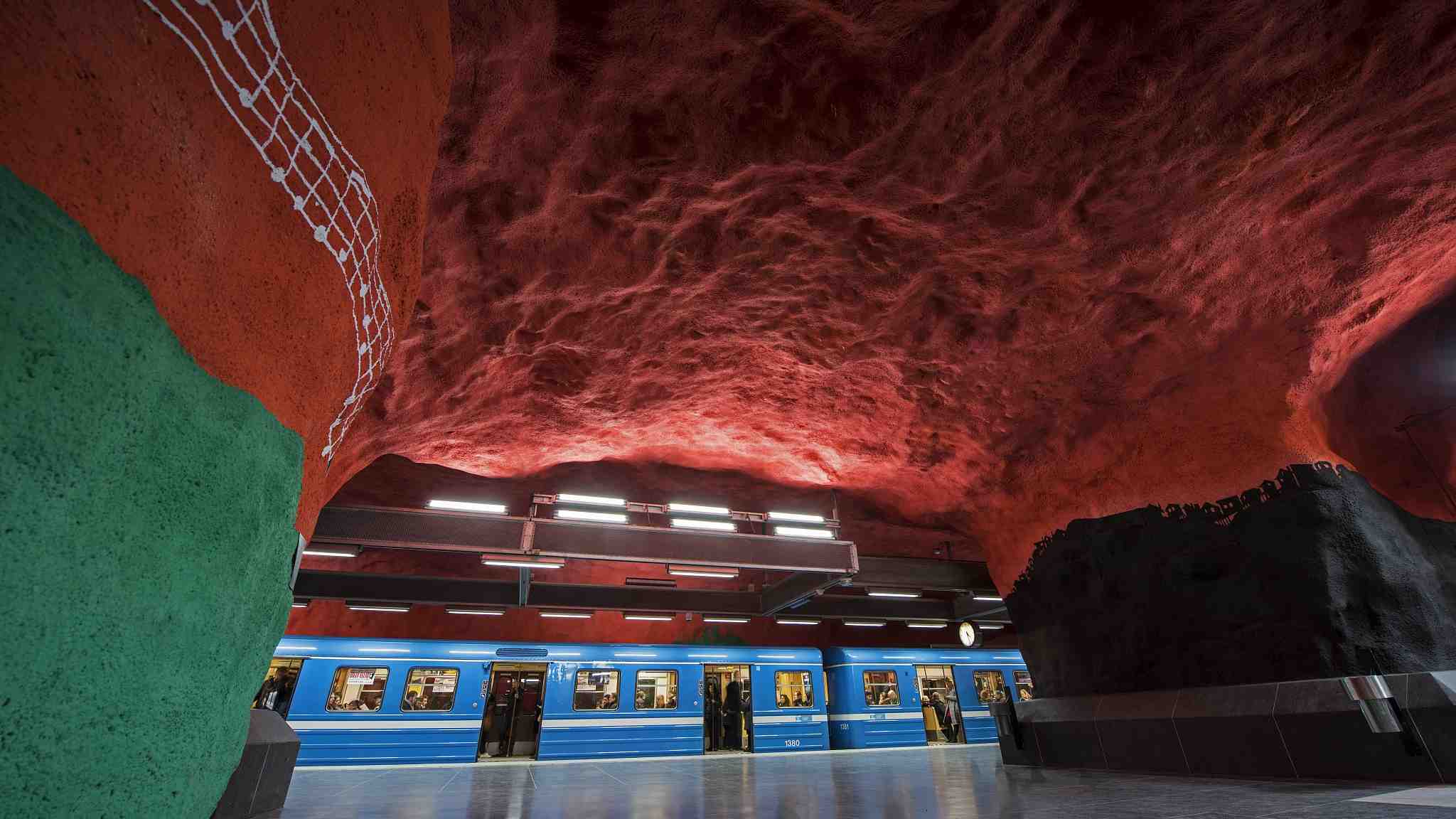 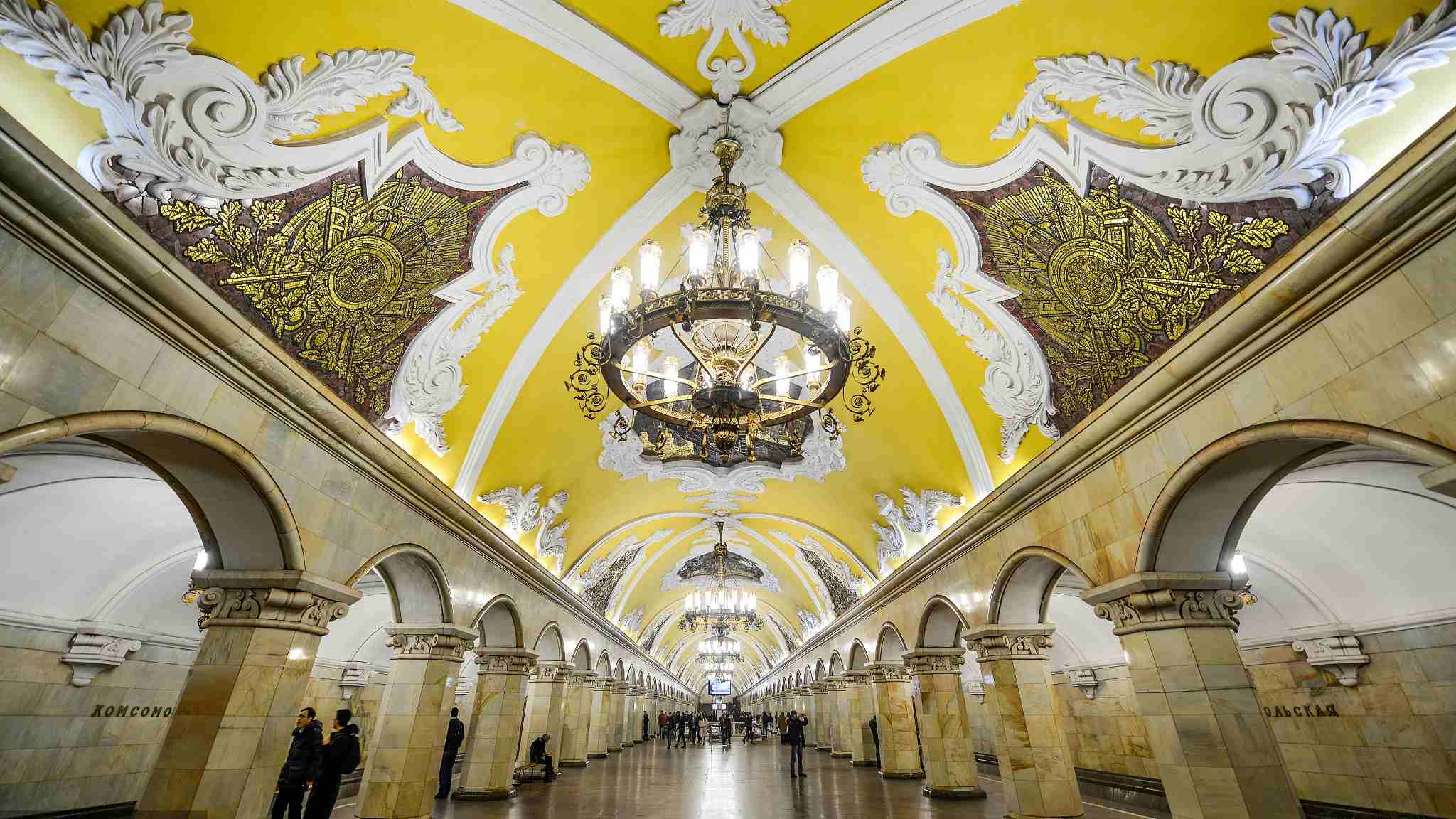 Some people describe the subway art of Beijing as a mosaic. When divided, different forms of art display diverse cultural and historical elements, and when united, they symbolize the development of a city and the creativity of its people.

By the end of 2020, up to 26 subway lines are expected to operate in Beijing, measuring a total distance of over 900 kilometers. Different styles of subway stations will jointly draw a larger cultural map for the city’s underground world.