For many local art lovers, Walasse Ting (1928-2010) and his works strike a chord largely because of his passionate depiction of female beauty, especially when he once called himself the “Flower Thief,” apparently referring to the symbolic link between flowers and women.

To honor the 90th anniversary of the artist’s birth, Longmen Art Projects holds the first exhibition in China’s mainland of a rare collection of landscape paintings on rice paper created by him.

Unusually, the artist only had one exhibition of pure landscape paintings, in his life, in Taipei in 1991.

Titled “Thousand Mountains Long Journey — The Flower Thief All Landscapes,” the exhibition reflects Ting’s inspiration and passion through a cluster of his landscape paintings, unshackled with any stereotyped tableau and hues.

Ting stands out as a pioneer painter of landscape, because he combines his unique insight into nature with contemporary aesthetic concepts and values.

Born in Wuxi, Jiangsu Province, Ting was raised in Shanghai. It is said that he began painting on the sidewalks at 4 years old and started creative painting on outdoor walls at 10. He briefly attended the Shanghai Art Academy, but always considered himself to be a self-taught artist.

In 1952, he emigrated to Paris, where he formed close friendships with various members of the CoBrA expressionist group (a European avant-garde movement) that drew inspiration from children’s paintings and primitive art.

In 1958, Ting moved to New York where abstract expressionism and pop art were at their peak. There he met Sam Francis and Andy Warhol, and they became close friends.

Despite these close relationships, he never considered himself to be a part of any artistic movement or group. As an artist, he prided himself on his aloofness in walking down his own path and staying true to his inner naivety, and he was described as “having a pure heart concealed in a wild vessel,”

In 1970, Ting received a Guggenheim Fellowship for Creative Arts. His works have been collected by museums around the world.

By the 1980s, Ting devoted his efforts to use ink brush, acrylic and rice paper. It allowed him to use smooth, flowering strokes and lively colors to depict tidal waves, beautiful women, mountains, animals and the natural environment.

In 2002, Ting was diagnosed with an aneurism and ceased to create artworks, He passed away in the spring of 2010 in New York.

The nature expressed in his landscape painting is, as opposed to the objective nature, a “second nature,” which is felt, touched and reviewed first by himself and then expressed in an aesthetic manner.

The artist used thin black lines to outline forms and painted in acrylic with a virtuosity that made the forms appear feather-light and transparent with a watercolor quality.

He depicted nature in colors that are of greater intensity, purity and brightness: straightforward, sheer, intense, and bold. For him, color is the most exciting visual language that maximizes artistic impact. His works radiate his confidence and undisguised disdain of banality, aesthetically sophisticated and yet innocently pleasing.

The cascading momentum, the writing-like structure reinforced by the colors and lines, and the plane composition of large color blocks, trace his interaction with nature. They transform into a unique and pure presence in his landscape painting, the “meaningful form” of the inner spirit, the symbol of emotions.

Mael Bellec, curator of Chinese and Korean collections at the Cernuschi Museum in Paris, commented on the Chinese inspiration behind Walasse Ting’s creation: “Some compositions, which became dominant from the mid-1970s and have antecedents in the works of Fan Kuan (990-1030) and Chen Shuren (1884-1948), assert their contemporaneity by confronting the viewer with grandiose, stylized reliefs in swaths of ink and vivid colors.”

Kant believes that imagination is one of the “mental powers that constitute genius,” and Ting echoed by saying “imagination is a powerful agent for creating, as it were, a second nature out of the material supplied to by actual nature. By this means, we get a sense of our freedom from the law of association.” 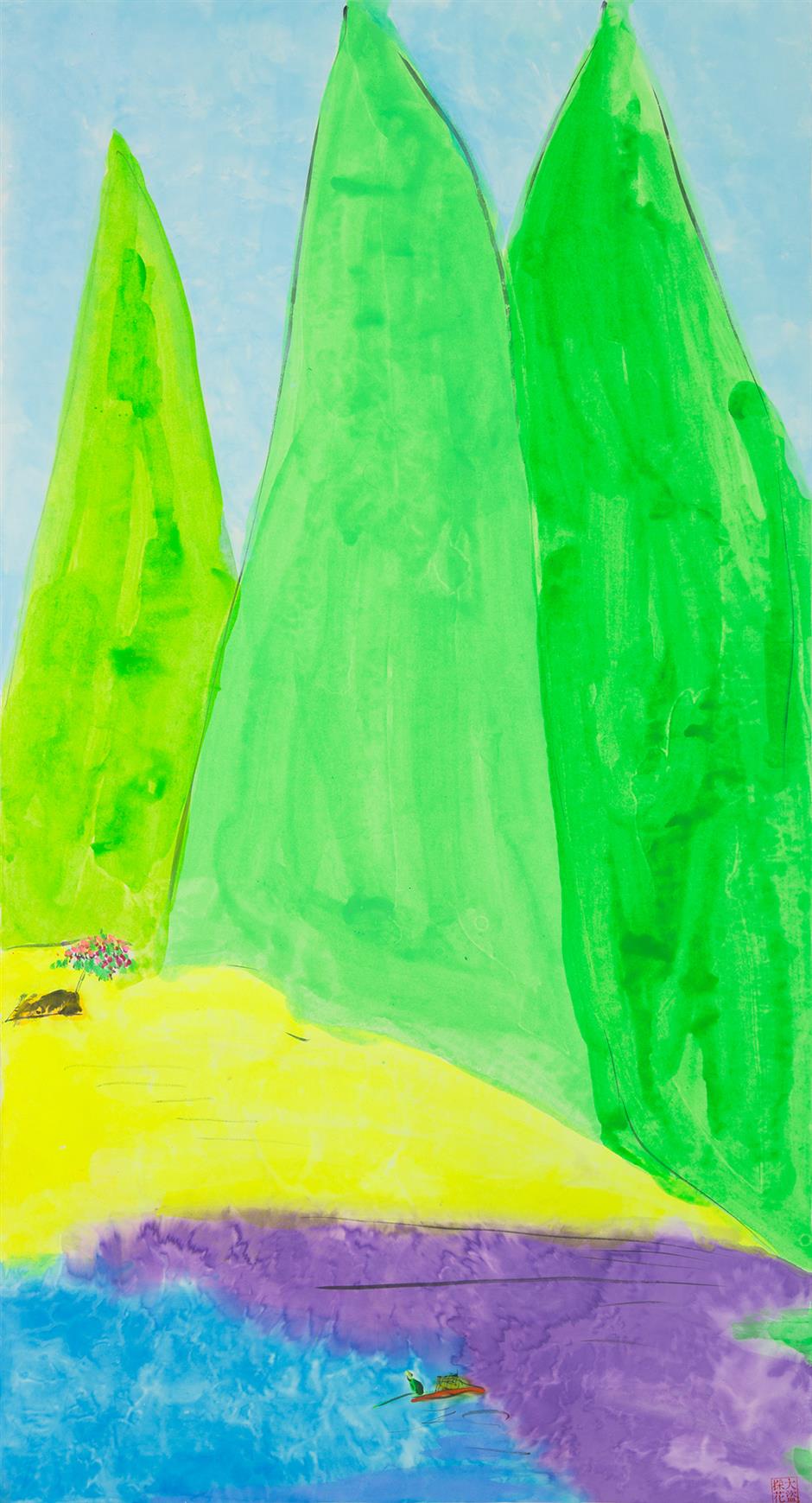 Spring Flowers and Purple Lakes in the Mountain, Chinese ink and acrylic on rice paper, 1990s 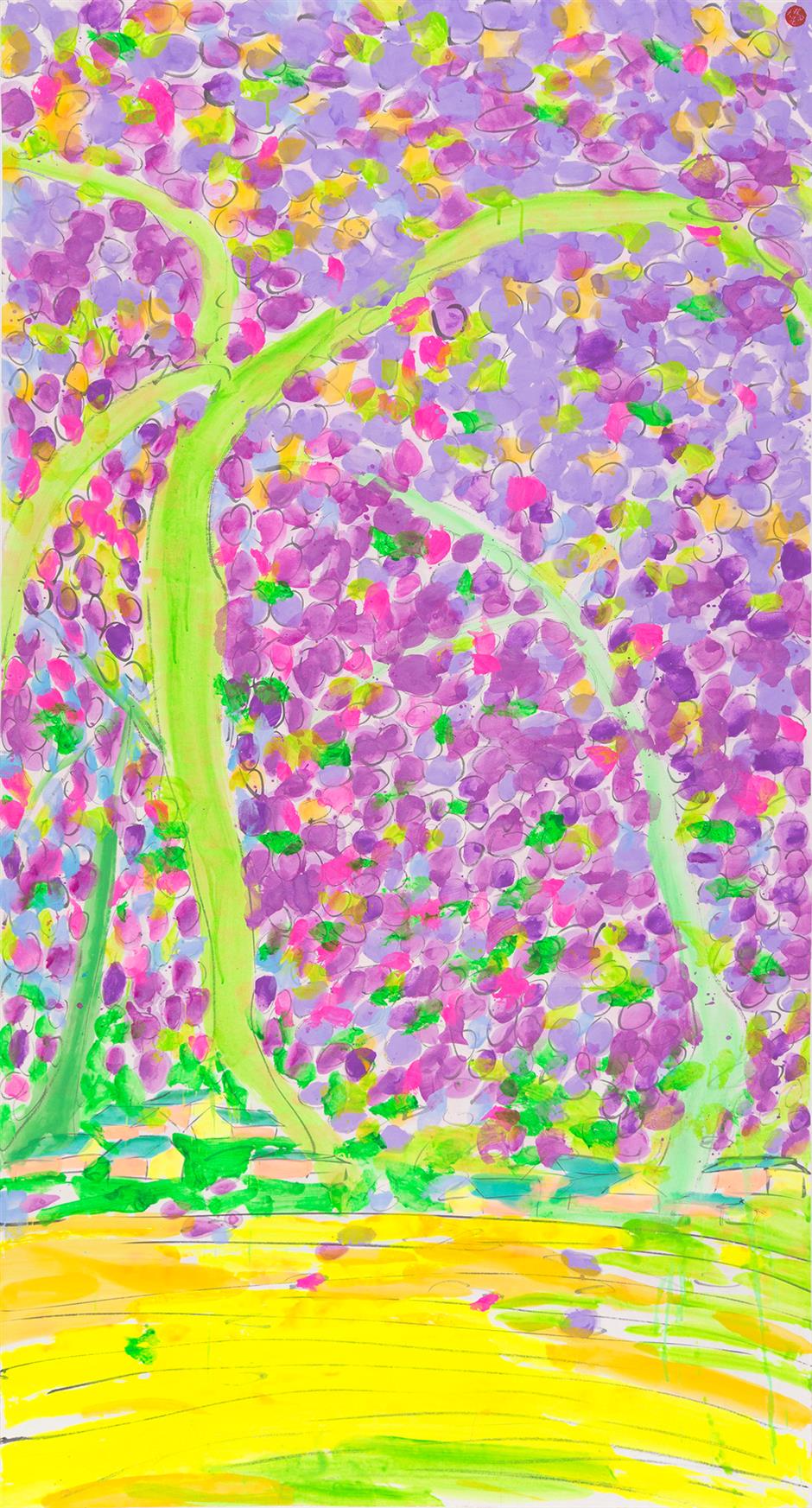