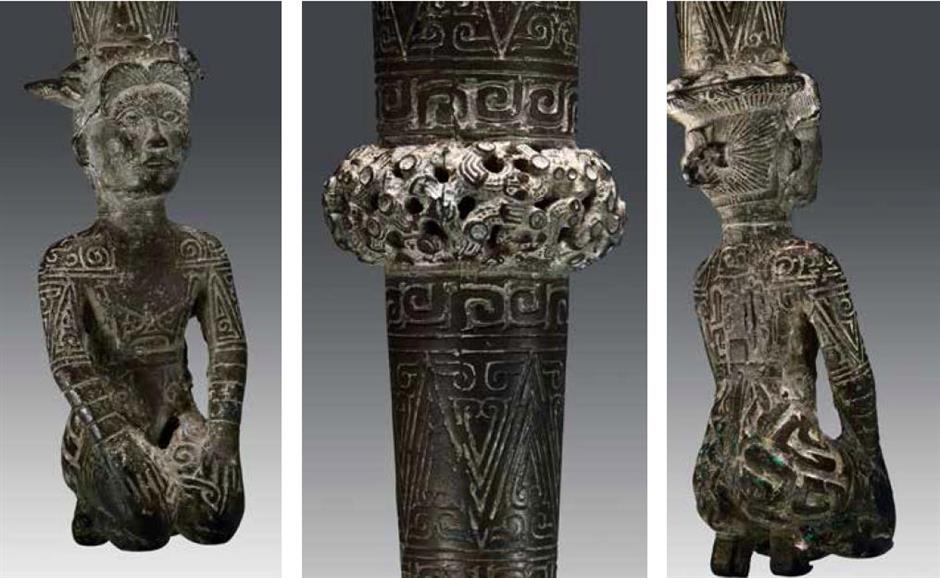 A fascinating exhibition illustrating the life and ethos of people living in Zhejiang Province is now open.

The exhibit, showcased at the West Lake Gallery of Zhejiang Provincial Museum, uses archaeological records and antiquities found in the area from the pre-historical era to the early 18th century to paint a picture of what life was once like in the province.

Divided into six units, in chronological order, the exposition gathers more than 100 cultural relics from 39 museums across Zhejiang.

Many have been scarcely exhibited in public before.

“We’ve spent a lot of time designing the framework of the exhibition. The six units are like six selected acts that showcase the most essential parts in Zhejiang’s cultural and historical development,” said Chen Hao, director of Zhejiang Provincial Museum.

Zhejiang is now an affluent place with a high population density. But it was an underdeveloped region under the State of Yue some 2,700 years ago, when the central China states were already fully fledged both culturally and economically.

“In terms of bronze ware unearthed in the area, we are barely comparable to provinces in central China, either in quantity or in size,” said Li Yuxin, the museum’s historical heritage department head. “Most of them (we exhibited) are weaponry and agricultural tools.”

A rare Spring and Autumn Period (770-476 BC) bronze cane found in Shaoxing City shows what the ancient Yue people looked like.

The cane, engraved with geometrical patterns throughout its body, is topped with a sculpted pigeon. A man kneeling at the bottom of the cane is found with a short haircut on his forehead and tattoos spread all over his body. This greatly differs from what we know of a central Chinese man during that time with robes, tied buns and hats.

The most important, and probably the best known, bronze in Zhejiang is the sword of Zhuji Yushi, king of Yue. The 52.4-centimeter sword with inscriptions on both sides of the blade was originally the property of Yushi, son of Goujian, who ruled the area from 464 to 459 BC. 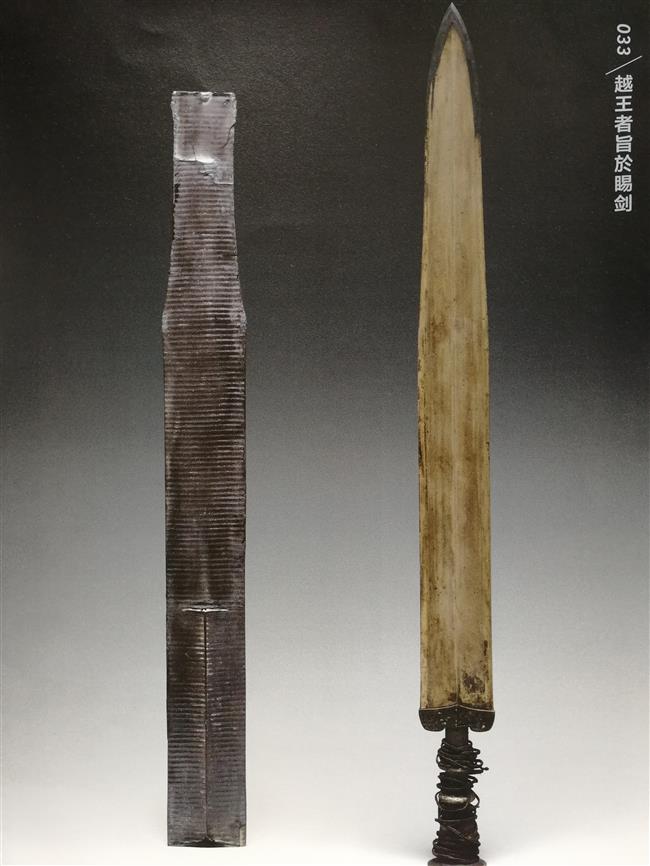 Zhuji, referring to the present Zhuji City, was probably the place Yushi took as the capital of his state. It was common at that time to take the fief you owned, or place of residence, as a surname, indicating a state of nobility that differentiated you from commoners.

Ma Chengyuan, an expert of Chinese bronzes accidentally found the sword in Hong Kong in 1995. Later bought by the Hangzhou Iron and Steel Group at a price of 1.36 million HK dollars (US$173,363), it was finally given as a gift to Zhejiang Provincial Museum and returned to where it was born.

Along with the Yushi sword, the exhibition also displays four other swords of Yue, discovered in Jingzhou, Hubei Province. They belonged to the different kings of Yue. One of them, with rhombus patterns on its blade, looks similar to the sword of Goujian, a star exhibit now owned by the Hubei Provincial Museum.

“It is quite strange that the swords of Yue have never been excavated in Zhejiang. Most of them were found in the state of Chu, which translates into the present Hubei, Henan and Anhui provinces. The reasons are unknown, some say they were taken as part of the dowry for women marrying to Chu,” explained Li.

Other than the bronzes, the ceramic artifacts are probably closer to the Yue culture we know of today.

The Yue Kiln in north Zhejiang and the Longquan Kiln in the south had been producing celadon ever since the Eastern Han Dynasty (AD 25-220) and came to prosperity during the Song Dynasty (960-1279) in the 12th and 13th centuries.

The exhibition reveals celadon made in Zhejiang throughout the dynasties. There are also traces of foreign cultural influences, as Longquan ware had been reportedly exported to countries like Japan, Philippines, Malaysia, Pakistan, India and Egypt.

One Yuan Dynasty (1271-1368) Longquan celadon double-gourd vase, excavated from a cellar underneath a department store in Qingtian County in southeast Zhejiang, is exceptional in its near-jade glaze color and perfect curved shape. It was included in a set of stamps issued in the 1990s featuring some of the best Longquan ware found in the country.

Another piece, a celadon incense burner with brown glazed ruyi (a curved ceremonial scepter symbolizing good fortune) and cloud patterns, is part of the grave items found in the tomb of Shuiqiu in Lin’an District of Hangzhou, who was the mother of Qian Liu, first and founding king of the Wuyue Kingdom.

“From archeological findings we could say that the Yue people were bellicose in the Bronze Age, but their culture gradually turned out to be genteel and refined.

The transition began since the reign of the Qian family, where their policy of keeping peace led its people away from wars and spared time for economic development, said Ni Yi, curator of the show.

The impact of the Qians is also represented in their piety in Buddhism. They funded constructions of numerous temples and Buddhist pagodas all over Zhejiang, including Baochu and Leifeng pagodas around Hangzhou’s West Lake. 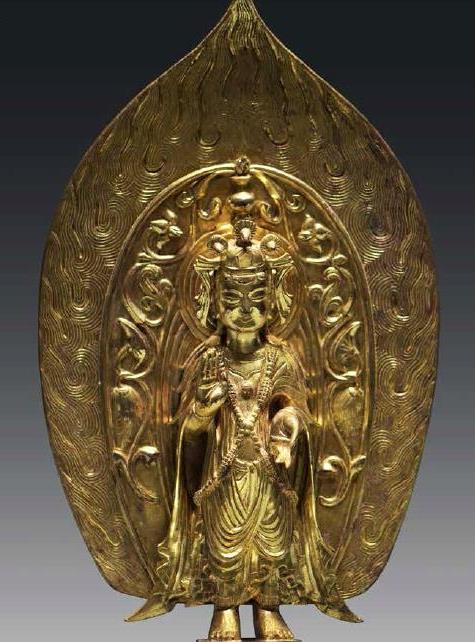 The exhibition shows two pieces of historical relics excavated from the cellar of Leifeng Pagoda in 2001, including a gilt bronze Buddha sculpture seated on a lotus throne with a fire nimbus and a silver-gilt stupa containing Buddha’s hair.

Another excellent piece not to be missed from the Buddhist section is a 5th century gilt bronze standing statue of Mahasthamaprapta, who represents the power of wisdom.

Excavated from the cellar of Wanfo Pagoda in Jinhua City, the piece is the earliest gilt bronze Buddhist sculpture unearthed to date.

“I had been looking for it for many years,” Li Yuxin, who was an archeologist before working for the museum since 2003, told Shanghai Daily.

The statue was loaned to Tiantai Museum in the 1970s when Norodom Sihanouk, the former king of Cambodia, came for a visit. It was kept there until Li found it in 2015 in the museum warehouse.

“At that time China was divided between the Northern Dynasty (AD 386-581) and the Southern Dynasty (AD 420-589). I think the piece is, undoubtedly, the best among all gilt bronze statues we know from the south.

And more importantly it offers evidence to see how the south interacted with and influenced the north in terms of Buddhist art and culture, added Li.

Date: Through October 8, closed on Mondays