An exhibition showcasing 160 fans illustrated with paintings and calligraphy is being staged at Wulin Pavilion of Zhejiang Museum through October 7.

In ancient times fans were associated with the elites in society. Chinese nobility were often seen holding, waving or gesturing with delicate fans, even when it was not hot.

Ink-wash paintings and calligraphy on fans were in vogue.

It differed from other traditional painting styles, because of the small size, special shape and material of fans. When Hangzhou was made the capital during the Southern Song Dynasty (1127-1279), the city had thousands of fan makers. 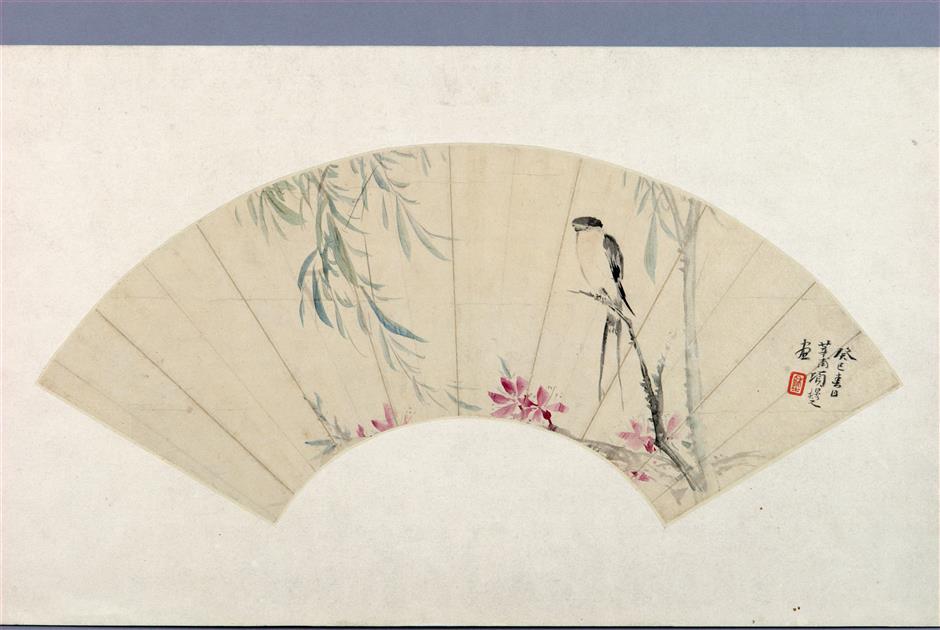 A fan painting by Xiang Muzhi

Artists, craftsmen and workers who supplied noble families flocked to the city. Streets were dotted with shops selling fans.

Most of the exhibits were made in the Ming and Qing dynasties.

One highlight is the fan calligraphy of Zheng Xie, who was one of the “Eight Odds of Yangzhou” which refers to eight ink painting artists with similar styles during the middle of the Qing Dynasty (1644-1911).

Zheng is better known by his courtesy name Zheng Banqiao.

As an exceptionally gifted painter, he abandoned traditional ideas and advocated an expressive and idiosyncratic style in art.

Due to the special structure of a folding fan, artists had to adjust the layout of their paintings to accommodate the shape. Usually, a folding fan painting included calligraphy, an ink drawing and a Chinese seal.

The exhibition displays a fan painting from Ming Dynasty painter Xiang Muzhi. It portrays a swallow in a plum tree. He used black ink to vividly depict the bird’s expression and position, and light green ink to depict foliage. The whole painting looks simple but has a vibrant spring vibe.

According to researchers, circular fans dominated society before the Song Dynasty. They were made of bamboo strips and covered with silk. Ink paintings and poems were painted on the surface, making them popular with noble ladies.

The exhibition has a circular fan painting portraying a woman leaning up against a handrail by Qing Dynasty painter Fei Yigeng. Her face is not showcased, but her mild temperament is depicted through her gesture, costume and hairstyle.

Date: Through October 7, closed on Mondays