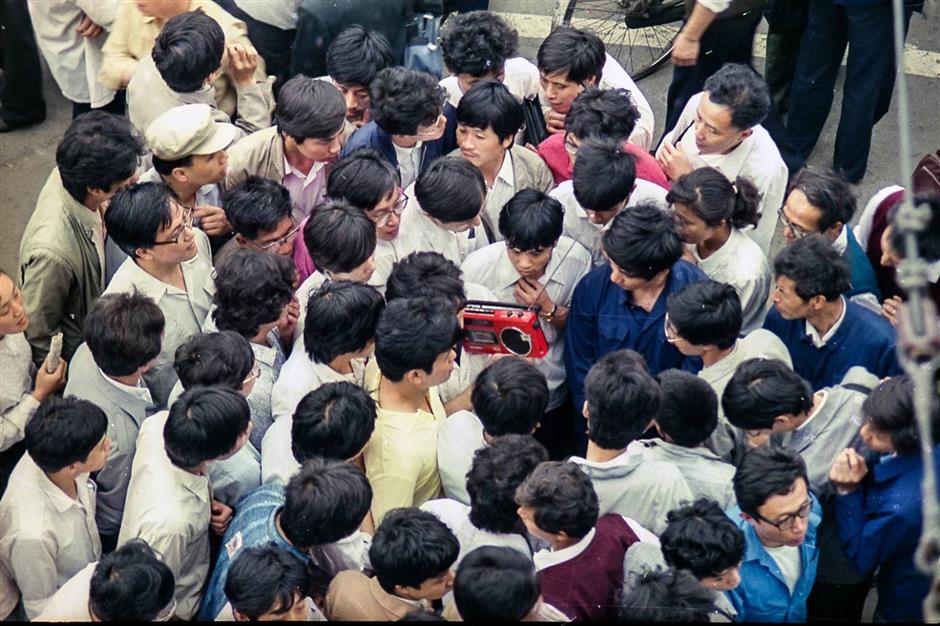 The invention of photography and the visual impact of an image has given us a greater understanding of the passing of time and the lives of the people living during that time.

A photograph exhibition, on the 40th anniversary of Shanghai’s reform and opening up, exploring the visual image, has been open to the public at the Xuhui T20 Art Space since September 21.

More than 250 photography works and a dozen vintage cameras are being showcased, offering visitors a step back in time to see how life was and is now.

Shanghai Daily has chosen several photos from the exhibition that particularly caught the eye. These black and white images highlight memories of the city’s daily life from the 1980s and 1990s. 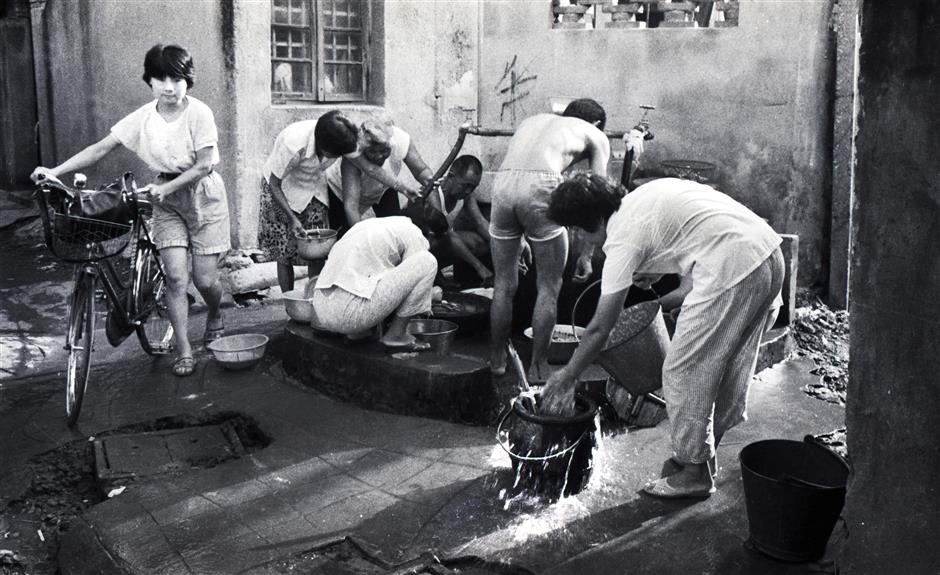 Residents in Zhuangjia Lane of Zhenru Town share water at two outdoor public taps during a morning rush hour in 1982. The city’s last public water supply station was demolished in 1999 when all the households got water pipes installed indoors. 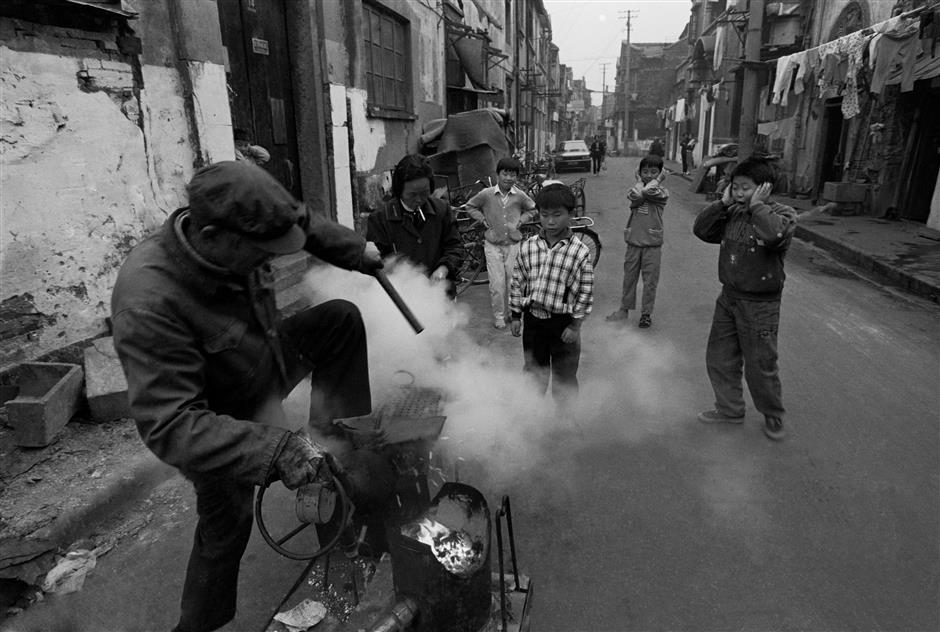 All works at the exhibition were taken by teachers and graduates from the Xuhui Yuren Photography School. The school was built in 1981 by famous Chinese photographer Chen Huaide (1915-1988).

At that time, visual art had not yet been taught as a subject in most schools or art academies. However, the active period of China’s artistic creation in the 1980s called for a specialist education to meet the needs of the students.

As one of the earliest officially recognized part-time schools in Shanghai, Xuhui Yuren offered two years of college with 18 courses in photography.

In the school’s heyday, between the years 1981-85, more than 100 students graduated with a degree each year. Many of them became professionals in the fields of photography, contemporary art, cinema, fashion, journalism or publishing.

With cameras, they created a large number of precious images of people, daily life, urban constructions, natural scenery and historical moments in accordance with the economic growth and social development in China over the preceding four decades. 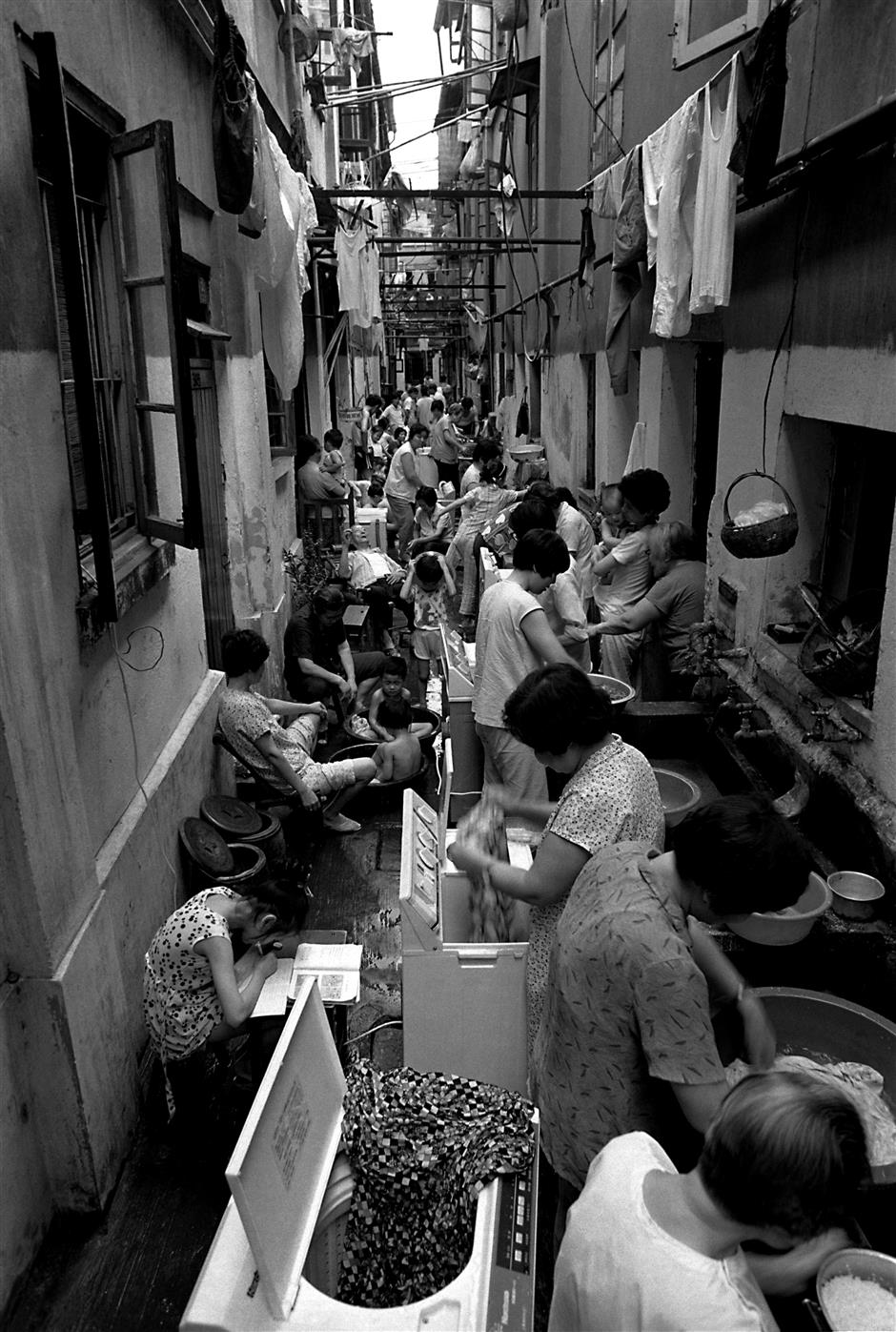 A weekend laundry day in Guizhou Road in 1990. Between the 1980s-90s, the average living space of Shanghai people was around 4 square meters. People had to make full use of the public area. 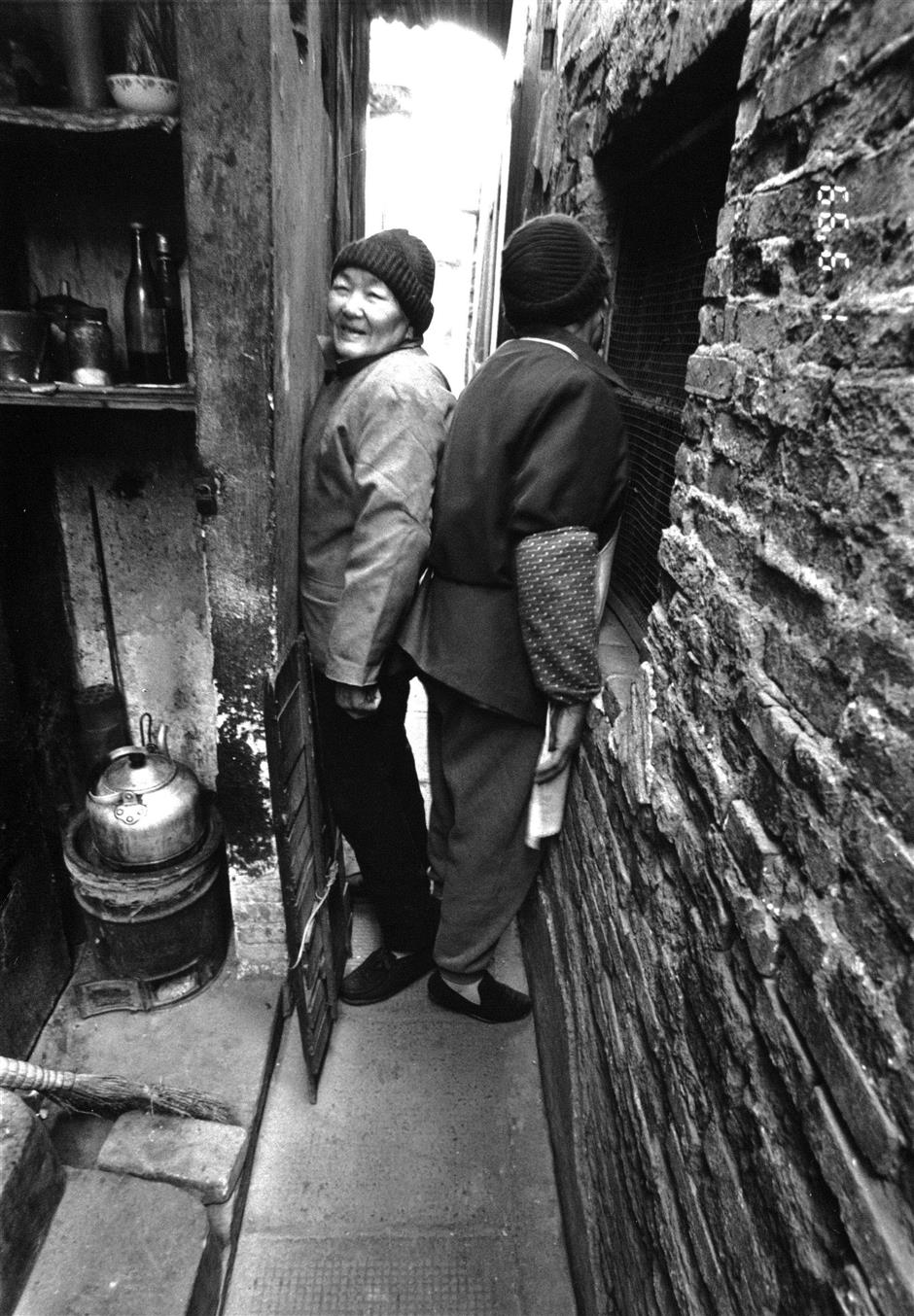 Two women squeeze past each other in an alleyway at Panjiawan in 1998. 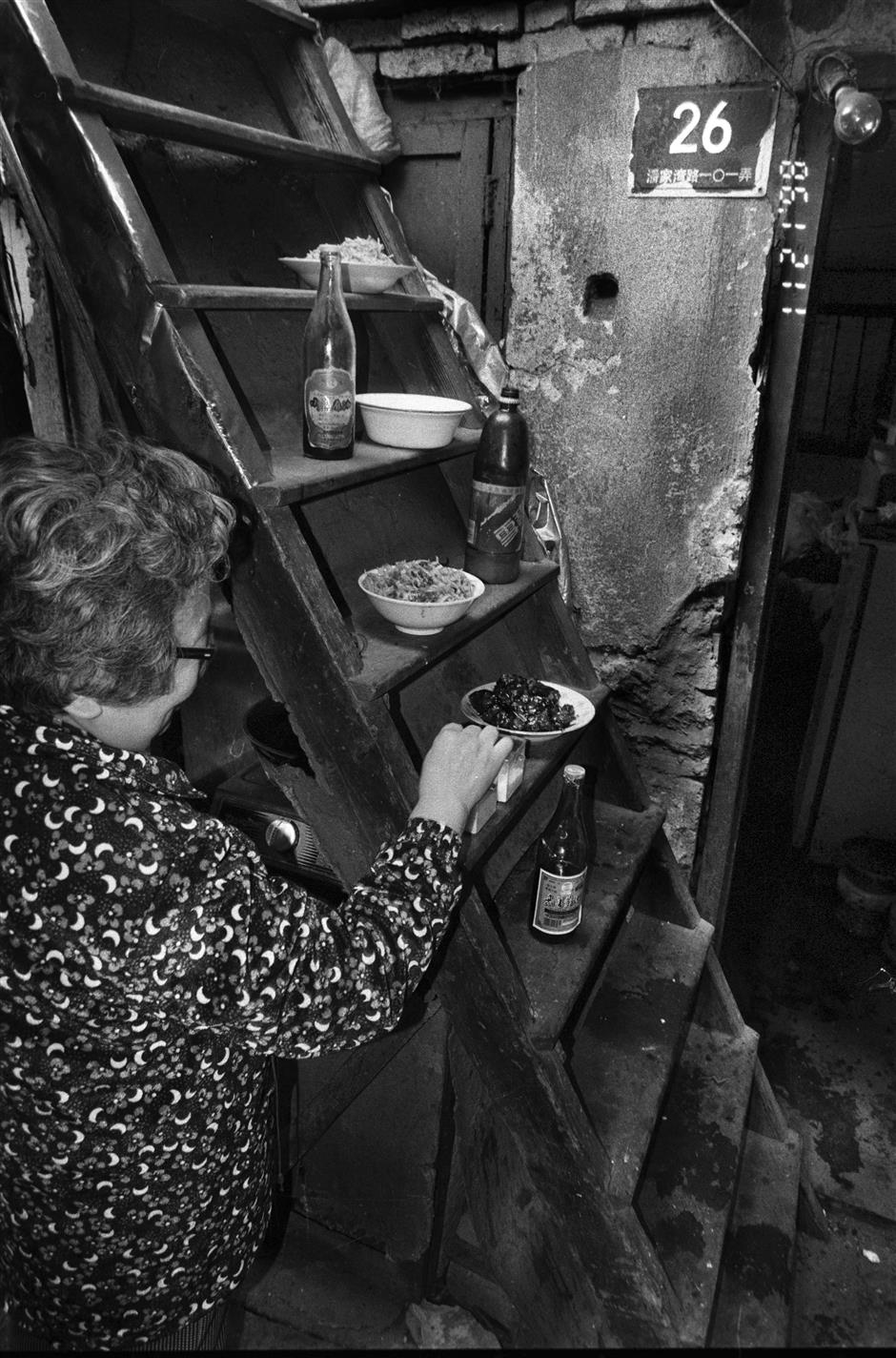 A woman places her dishes and ingredients on a public ladder while cooking under it at Panjiawan in 1998. Even in the 1990s, half of Shanghai residents still lived in old lanes where there were no independent kitchens or toilets.

Some of their works were exhibited overseas and won international awards. Among the “best of the best” are Yang Yuanchang, Lu Yuanmin, Chen Haiwen, Deke Erh, Gong Jianhua, Hu Yang, and many more, whose creations have been collected by the world’s major museums and art institutions to represent the progress and advancement of Chinese photographic arts and business.

A program of presentations, discussion evenings and guided tours will accompany the exhibition through October 7.

The opening ceremony also saw the launch of a photo album titled “In the Flow for Truth” in memory of Chen Huaide, a pioneer in Chinese photography, as well as a review of a great era. 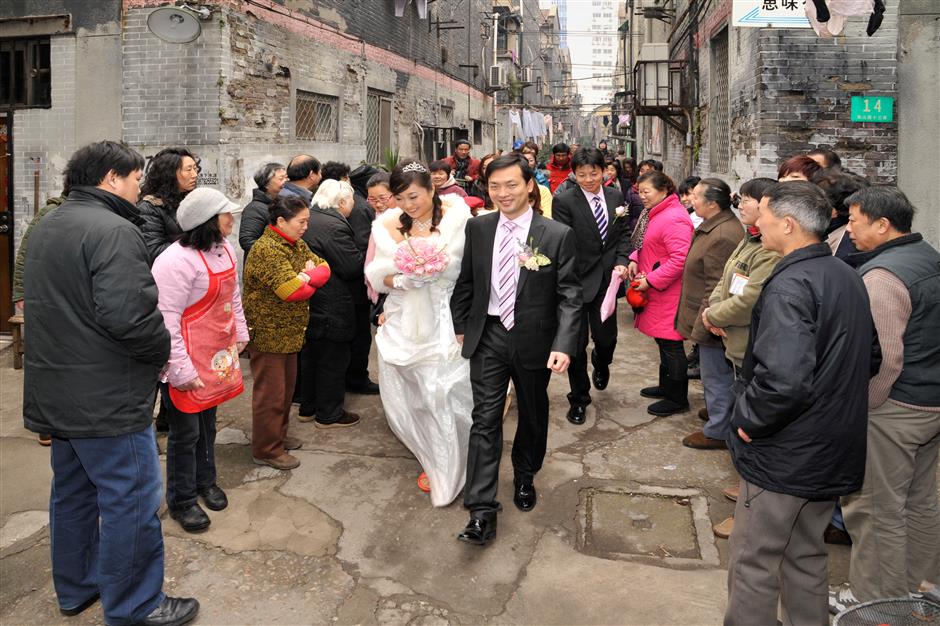 A newly-wed couple are greeted by their neighbors as they walk through a residential complex on Linshan Road in Zhabei District in 2002. 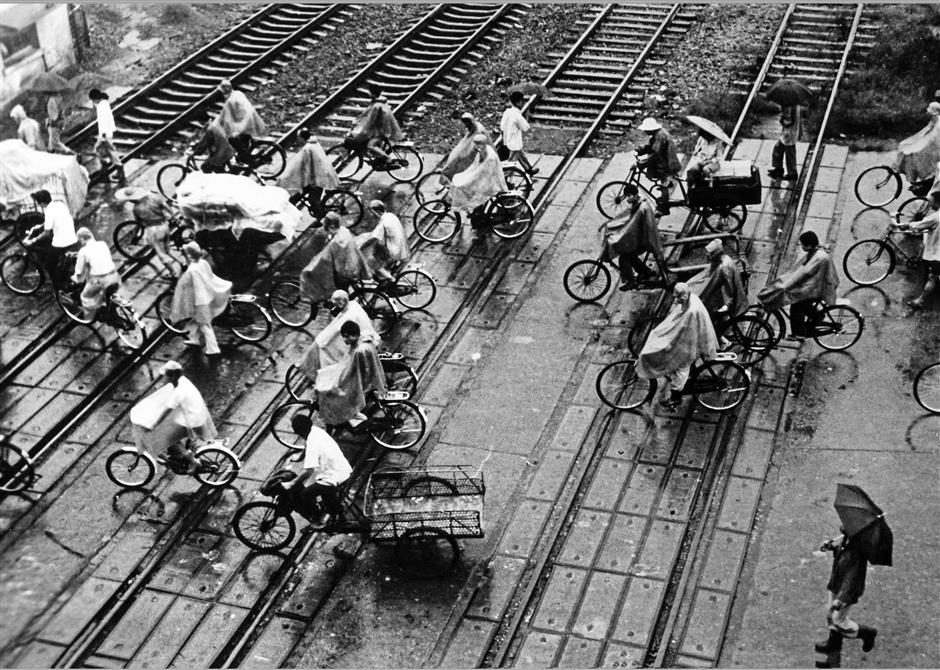 Cyclists pass rail lines at a crossroad near Shanghai Railway Station in 1984.