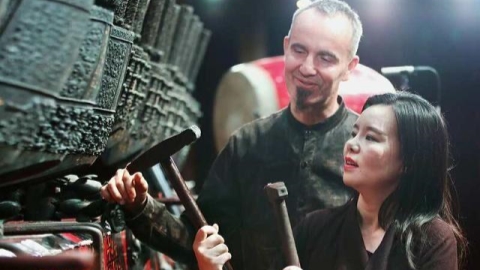 German composer and music producer Robert Zollitsch, or better known for his Chinese name Lao Luo (Old Luo), and his wife Gong Linna, a famous Chinese singer, will return to Shanghai stage tonight for a concert on new Chinese folk music in collaboration with conductor Yao Shenshen and the Shanghai Chinese Orchestra.

The concert will begin with one of Lao Luo’s compositions “Bridge,” followed by “Four Seasons in Jiangnan,” “The Song of Yi River” and “Xi Xing,” which showcase his comprehensive understanding of Chinese traditional instruments and folk music.

Gong will be performing at the concert as a guest singer.

The Shanghai Chinese Orchestra previously collaborated with Lao Luo in 2013 for a performance dedicated to his compositions.