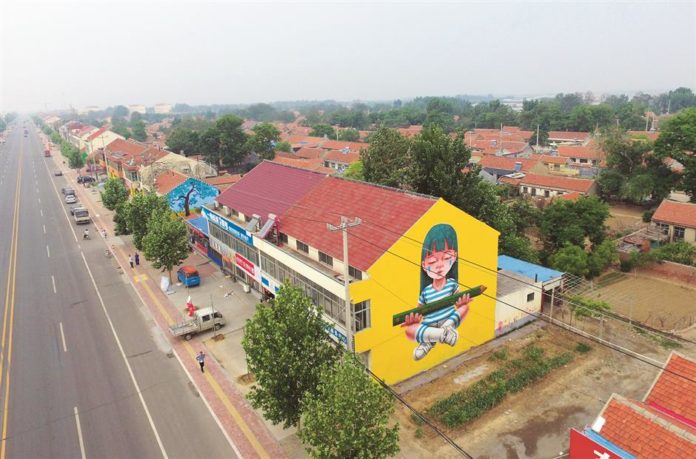 Xin Wangjun looked around his hometown village of Dongtou in the eastern province of Shangdong and concluded it looked, well, decidedly dull.

As an artist, he had the skills to do something about that. He organized a graffiti festival of 100 other artists, and they went on to brighten the village with their artwork.

Xin, 35, has warm childhood memories of Dongtou, which sits in an area of vegetable farms. The village was a backwater that lacked the sophistication he sought as a young man, so he left after graduating from junior high school. 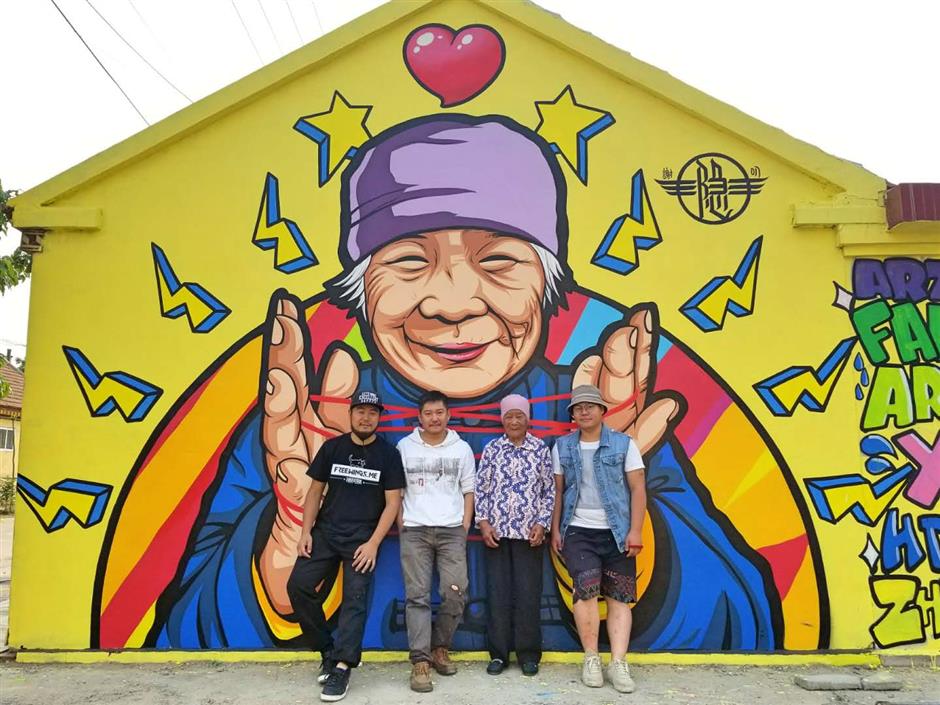 “Before I left, the standard for ‘being educated’ in the village was getting good marks at school, and ‘success’ was defined as earning as much money as possible,” Xin says. “That’s why I left. I wanted to find a place that could truly help me develop my sense of myself.”

For the next 10-plus years, he immersed himself in eye-popping performance art, which included more than 100 pencil portraits of Chinese cultural figures of the early 20th century. Xin held an exhibition in Beijing, which was well received. It was his “personal rebirth.” 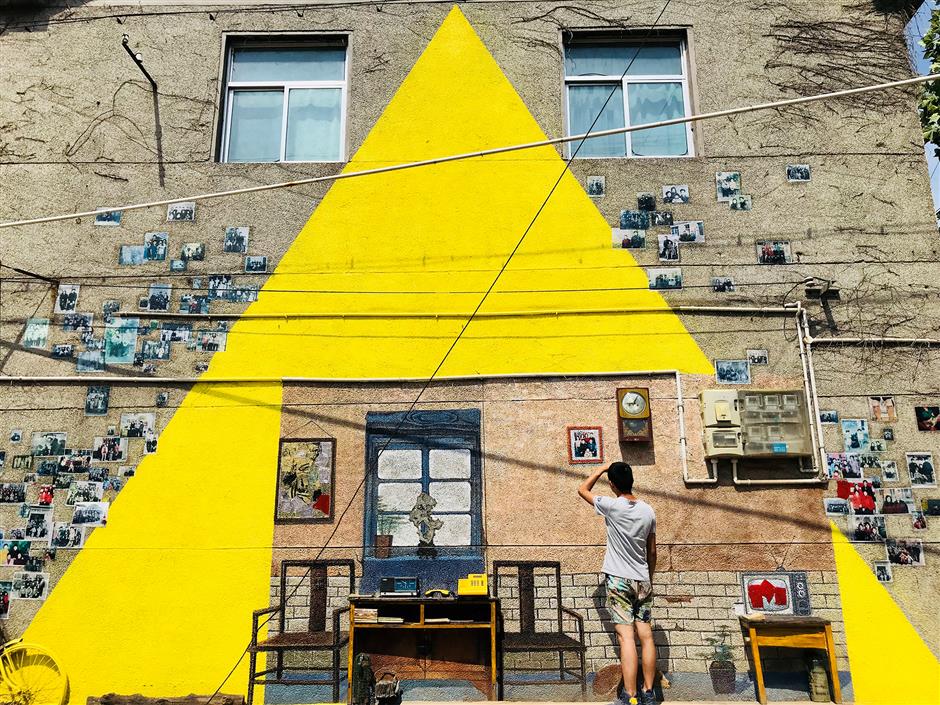 Filled with energy, he decided it was time to return to his hometown and do something about its drab environment.

The 40-day project was like nothing ever seen in the village. The artists painted on the exteriors of farmhouses with vibrant colors and whimsical graffiti, and they did it so expertly that the artwork blended in perfectly with wall fixtures, such as pipes, windows and adjacent storage barrels. 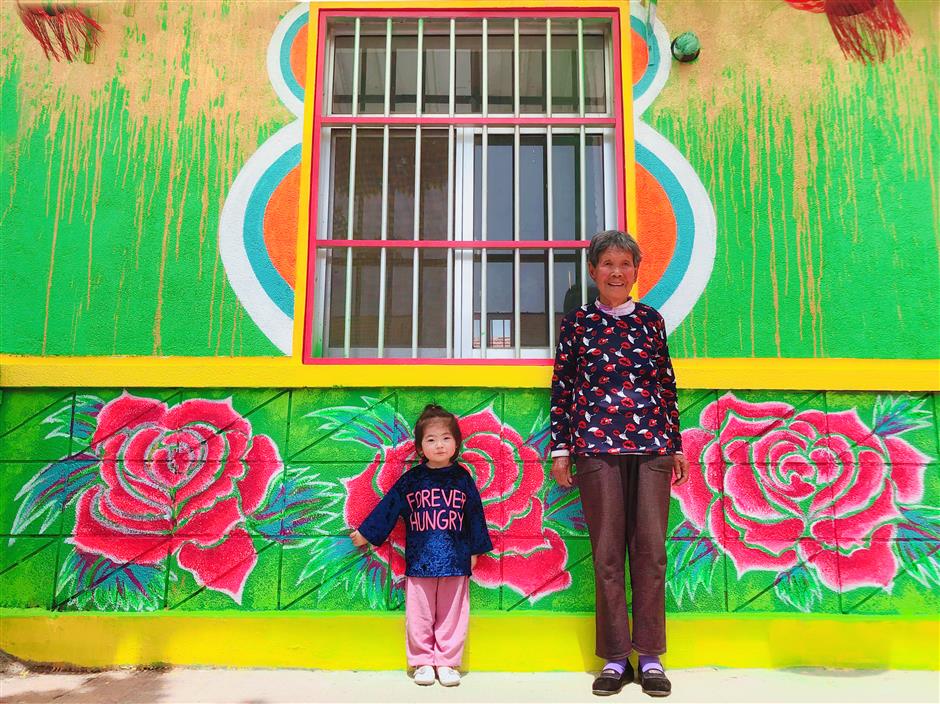 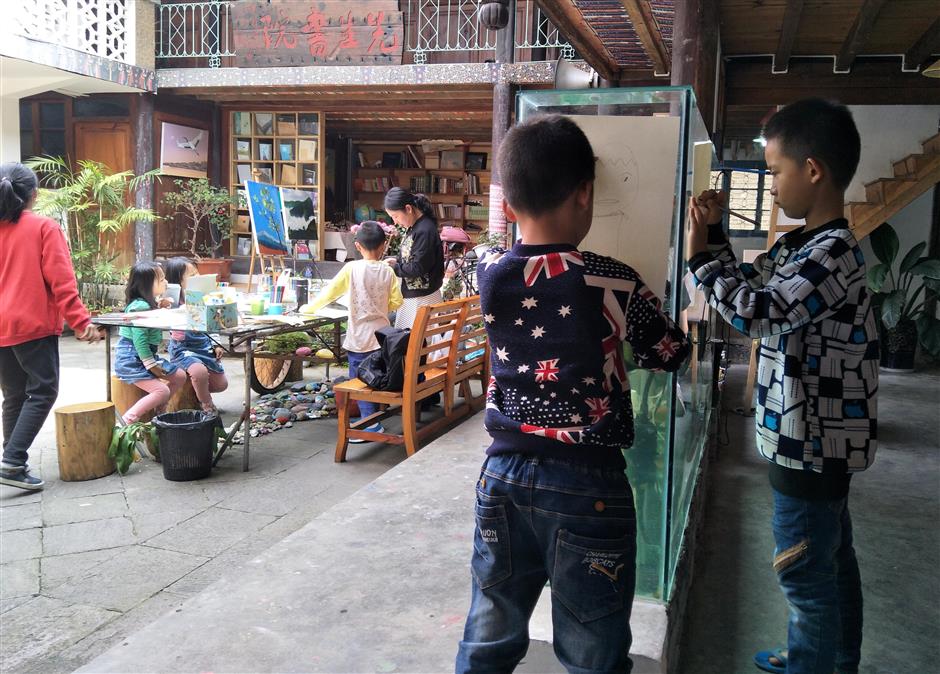 Since most young and middle-aged people have left the village to seek their fortunes in large cities, the artists were mostly watched by curious elders and children who still live there.

Some of them also became artists’ inspiration. One of the most popular graffiti, entitled “Mother Playing Cat’s Cradle,” features an old woman playing with red strings. Her smiling face occupied more than half of a 15-meter-high wall, creating a stunning visual effect. 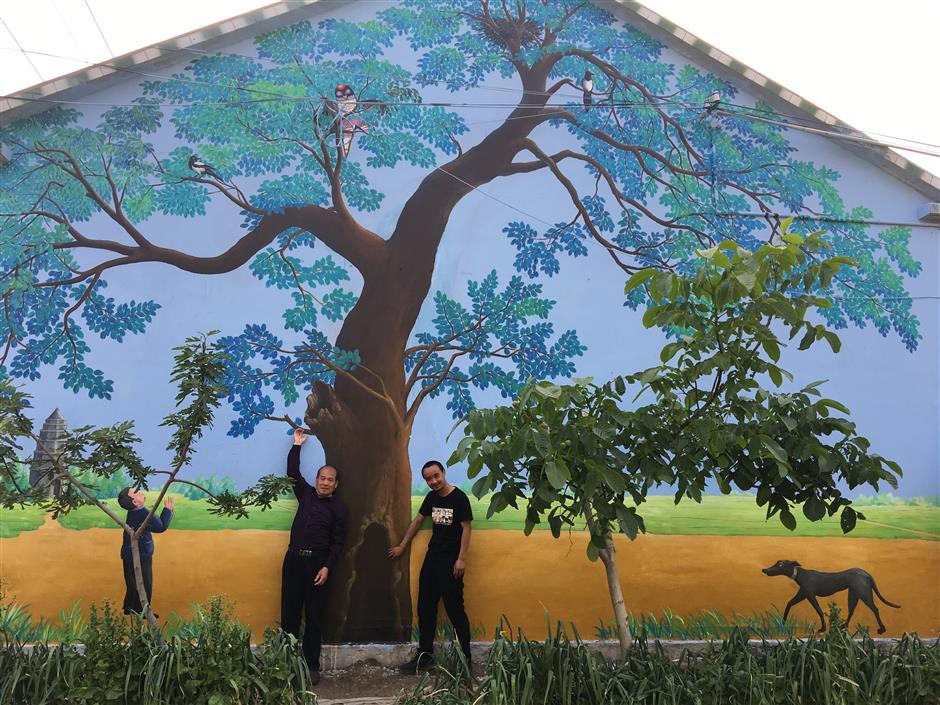 The muse for the fresco is Tang Xueying, a woman in her 80s. After her face became an icon of Dongtou, the villagers joked that she had become a celebrity.

“People all say that the old woman on the wall looks exactly like me, but I’m not sure. Maybe it does,” Tang says. “I did show the artists the trick of cat’s cradle though.”

Li Hangong, 82, who has lived in the village all his life, says the place has become a scenic area. His daily routine is to walk around to look at all the graffiti, which he never tires of seeing. 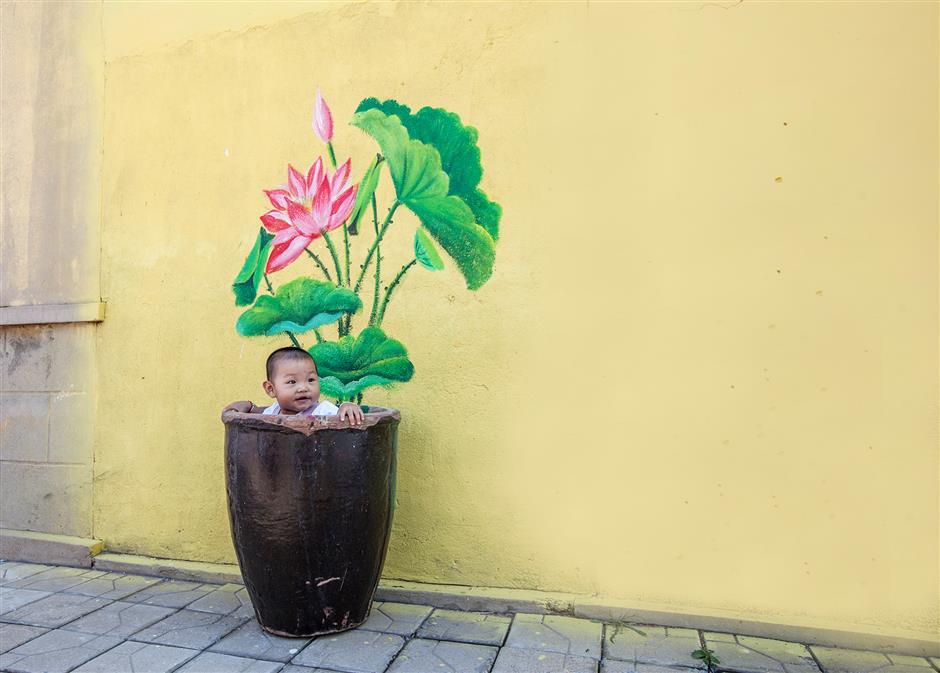 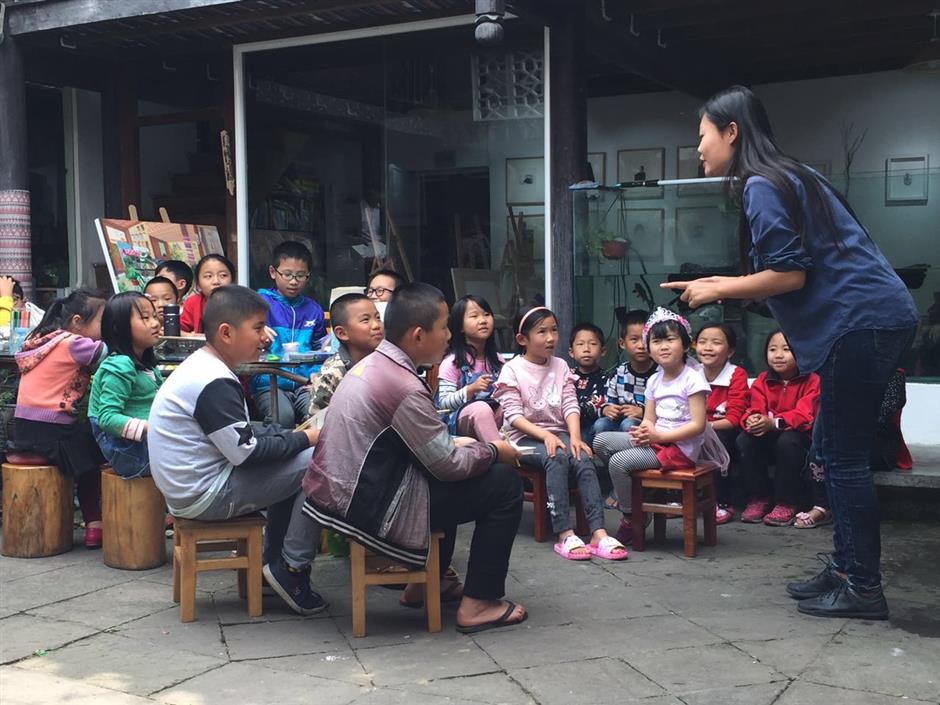 “I particularly like the one called ‘Color TV’ because it reminds me of the color bars that used to appear on old televisions,” he says.

Xin says he is thrilled by the reception the artwork received from the village. Many residents assisted the project in their own humble ways.

During the process, villagers gave the team of artists two goats, a truckload of seasoning sauces, vegetables and drinking water. 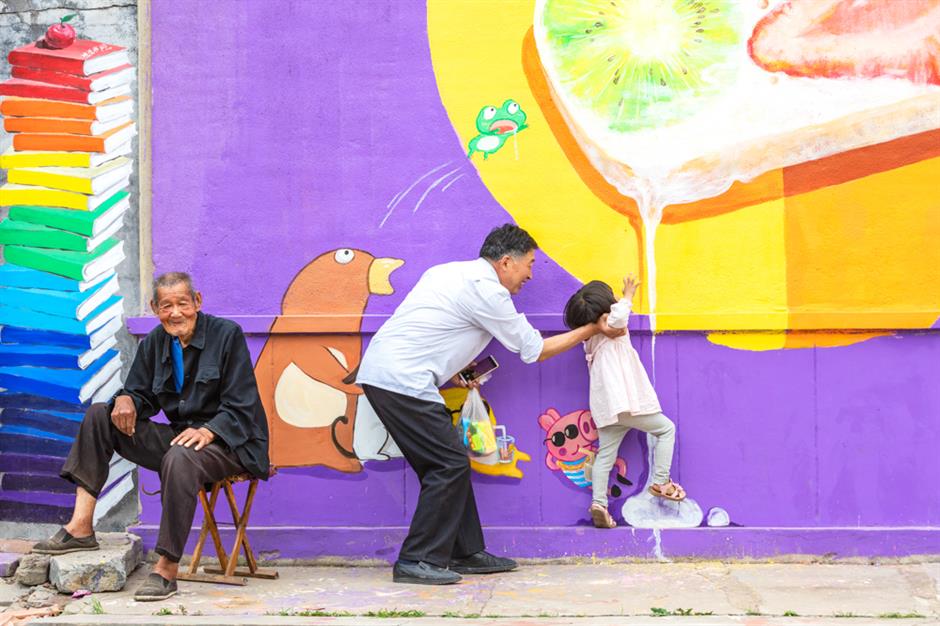 This was not Xin’s first attempt to brighten up lackluster rural life. Last November, he and a fellow artist painted an entire lane of houses in Chang’an Village in the mountains of Yunnan Province.

The project stirred a lot of attention. A movie director shot a documentary about the work, and a musician promoted the local music of Dehong across China. As a result, tourists flooded the town, boosting the local economy.

But these one-off beautification events are not Xin’s ultimate goal. He wants to build a long-lasting cultural influence in remote villages to get people thinking and broaden their minds.

Xin has built an art salon in his old family home in Dongtou. He implored his father not to tear down the old homestead, promising that he could make good use of it.

He redecorated the house, painted the walls and installed green plants. He named the salon Xiansheng Shuyuan, or the Masters’ Academy. There, periodic artistic events are held free for villagers.

When there is no current event being staged, locals can just come for a cup of tea and browse through books in the small library. Hundreds of people visited on the day the salon opened.

The idea attracted not only villagers but also artists. Writer and movie director Xu Xing held a movie party in the salon, where his film “A Love Letter” was screened. An art professor from the University of California offered to hold a one-week lecture series on art and English this summer, and seats were solidly book out.

“I am glad that the salon not only brings art to the daily lives of people, but also connects them to the wider world in a way I’ve never seen there before,” Xin says. “It also brings outsiders in contact with rural life.”

He also set up a similar salon in Dehong, where children are the main visitors. Volunteers from all over the country go there to give lessons on painting, music and other art forms.

“We have full-time teachers and part-time volunteers,” Xin says. “We publish the courses for children online, and artists can sign up as teachers.”

The salon also plans to aid some 1,000 children whose parents have left home to work in larger cities to support the family. Children’s paintings have been imprinted on socks as souvenirs, and sales are used to support the teaching and other activities in the salon.

“We can see the changes in the children,” Xin says. “And their changes affect me as well. It is a way of cultivating their thinking about art, which might change their future.”