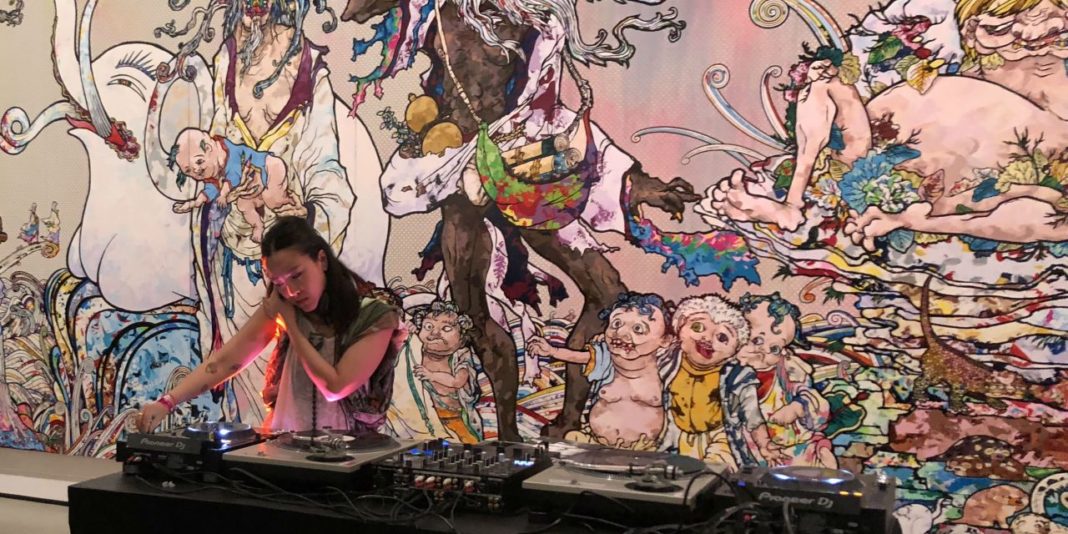 Last Saturday the Broad Museum in downtown Los Angeles gathered together an eclectic lineup of Chinese musicians, presenting dramatically different visions of what’s percolating in China’s contemporary underground and avant garde scenes for the third in their yearly “Summer Happenings at the Broad” series.

Dubbed The Greater Body (Shi-Dati), the sold out event was the first salvo in the museum’s efforts to “integrate more artists from China into the programming that we do,” as Ed Patuto, the Broad’s director of engagement told RADII in our preview of the event.

Her collaboration with Asian Dope Boys, brainchild of visual artist Chen Tianzhuo, created a soundtrack for their performance that was adequately mythical, and hewn to the imagined future by way of underground club culture.

As Aïsha Devi built up her soundscapes, at the front of the stage a large man with bleached blond hair (or wig), painted completely red appeared, naked but for a neon dusted leopard print skirt, and a polished silver muzzle trailing a long linked chain.

He walked a few feet into the crowd before laying down luxuriantly and watching Aïsha Devi, who continued to trigger cold bass-laden blasts and breathe icy, echoing high notes into her mic. Insanely, the crowd eventually returned their own attention back to Aïsha Devi, ignoring the naked blond-haired red seraph in a psychedelic leopard print skirt.

At the other end of the muzzle’s chain was another psilocybin god-vision, an amalgam of virility and phallic symbols, skinny and bald, painted completely white, naked but for a tattered loincloth, arms painted into snakes with black and red stripes, and a facial sex toy with a gold penis protruding over his nose.

Part of the jangled trip of Aïsha Devi’s music is it’s rhythmic irregularity, so the two performers’ movements felt only distantly connected to the music, as the white virility-penis-snake god grappled with the red fat masochist in the Bane mask and coaxed subservience. The audience, by this point, was paying attention again.

The performers dragged and slid their way up onto the stage. The projections behind them showed the white-painted snake god, without his phallic mask, standing in a river and staring into the camera with a gigantic, long mackerel hanging from his mouth.

The museum doors were still closed, so the Plaza had filled up and drinks were going down and vape pens of all manner were releasing tiny puffs into the night, as everyone gaped at this orgiastic ritual playing out before them. And then it was over, and Aïsha Devi and the two performers disappeared behind the stage.

Re-TROS took over the Plaza stage at the inopportune moment the museum finally opened its doors, vacuuming in the buzzing crowd. But Re-TROS were able to dial up their cold post-punk groove quickly and by the mid-point of their set the Plaza was nearly full, with an appreciative crowd soaking up a surprisingly exploratory set by a band that’s finding more and more distance from their earlier influences.

In the lobby a giant escalator shoots up to the third floor of the museum. Dai Zifan stood nearby the foot of the escalator, colorful projections bubbling on the wall behind him, playing a 37-reed sheng, a handheld Chinese free reed instrument with vertical pipes dating back to at least the 7th century BCE.

Dai Zifan’s looked epically steampunk, and his performance of Ban, by composer Ji Dongyong, drew a quick crowd and lent the lobby a light, playful vibe after the heavy atmospherics outside.

Inside, hallways and escalators tightly wrapped into tight tunnel walls give way to open gallery and lobby space, with passages between rooms where walls fail to connect. The Broad’s impressive collection of modern/contemporary art has made it a hard ticket in Los Angeles, and wandering the museum was a prime perk of the Summer Happenings.

You might want a live soundtrack as you wander through a maze of Ruscha, Basquiat, Rauschenberg, et. al., but it can have a strange effect on the actual music. This might have been the case with Shanghai-based underground club artist MIIIA, who was the only performer of the night in the third floor gallery.

With the dense, vibrant splash of Takashi Murakami’s massive 82 foot long mural In the Land of the Dead, Stepping on the Tail of a Rainbow behind her, the music might have pulsed with a little extra neon vibrancy, but the bright gallery setting and the low volume restrictions made it a far cry from deep vibes of Shanghai clubs ALL or Elevator at 4am and the usual intensity of her music.

Volume restrictions also led Yan Jun, de facto poet laureate of the cerebral wing of the Beijing experimental music scene, to abandon his planned performance, described in the event promo as “incorporating field recording, voice, feedback and his own body in response to the architecture of the museum.”

Instead, he sat at a table typing on his laptop, a mixer with nothing plugged in next to him, his words projected on the wall behind him that wrapped around to the museum gift shop.

His text seemed spontaneous, apparently aiming to explain to the gathered crowd who he was — a poet? Musician?  *gasp* “music critic”? I later heard indirectly that he described his performance as the sound of his fingers tapping the keys, but looking at the semi-circle gathered around the table, most people were watching his face, which danced with the small twitches and subconscious expressions of a person engaged in the act of writing.

Occulus Hall, a moderately-sized room on the second floor was essentially turned into a black box for Beijing street punks Hell City and Shave ‘n Shut, and Xi’an post punkers Fazi. It wasn’t exactly the “underground Beijing punk club” advertised (there were no drinks allowed in the museum, and the floor wasn’t sticky, nor the air humid with human sweat), but it consistently had the most buzzed up vibe of the event. Something about walking from a bright clean art gallery into a pitch black room and seeing a Chinese skinhead oi punk on stage will really get the blood pumping in your typical Angeleno.

It’s unlikely most patrons of the Broad are also devotees of street punk. But being in a dark room that felt completely separate from the pretensions of the art and architecture just outside made it easy to put down your barriers and dig into some raucous energy. This was a room where people yelled and whooped after songs, despite the local tradition of observing music silently. It might be cliche to say that Hell City and Shave ‘n Shut “play with conviction”, but it’s not an insignificant point for a crowd used to bands with a very studied cool, in a time where we crave music that speaks to our social anxieties rather than music that seeks to escape them.

Back outside into the cool night, the white honeycombed outer wall that the museum’s architects refer to as “the veil” was lit up along the side of the Plaza stage, making the outdoor space feel more intimate and sucking up the ambient city noise.

This rippled, chalk-white wall was a looming aesthetic contract to one of the night’s most engaging performances, a screening of Zhou Hongbo’s documentary Lotus Ferry, with a live soundtrack scored and performed by Daniel Collás with Juliet Swango and the fantastic pipa player Jie Ma.

Despite the wide spectrum of the night, from cartoon mohawks to mythical lysergic sex rituals, the screening of Lotus Ferry, with it’s fly-on-the-wall observations of change sweeping over an old residential neighborhood in Shanghai, was the performance that most established China as a setting to contextualize the music.

Jie Ma’s pipa playing glided between classical technique and a Morricone-like jangle, giving the film a jaunty, wild west edge. Collás allowed the raw field recording audio of the documentary take over throughout the performance, silencing the band and pulling the audience into small pockets of the film before continuing with a new theme.

The Summer Happening ended back in the Occulus Room with Fazi, who seem to be endlessly touring and recording (and occasionally combine both, like last year’s quixotic, largely instrumental album Dead Sea, which the band recorded by convincing P.K.14 frontman and indefatigable producer Yang Haisong to drag a massive mixing console and bins of mics and preamps along their epic two month tour of China).

Fazi’s vibe, most succinctly summed up by the slogan over the door of the underground venue singer Liu Peng runs in their hometown Xi’an — “If the kids are all united…” — brings warm electricity to the cold circuits of post-punk. Fazi’s music has begun to trek away from the concise tunefulness of their early albums and at the Broad they turned out an ecstatic take on krautrock that filled up the blackened gallery space and gave the crowd a last blast of energy to dance to in the darkness.

The Greater Body (Shi-Dati) provided an unassuming but audacious counterpoint to more commercial attempts to get exposure for Chinese artists. It assembled musicians and performers operating at the highest level within their own, sometimes self-created, slices of disparate underground Chinese scenes.

The Broad put together a night of disparate voices from China’s neon edge, cutting a place in a crowded summer of events in Los Angeles. We can only hope there’s more to come. 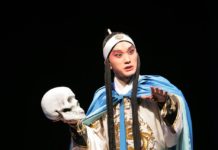 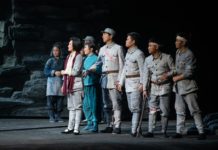