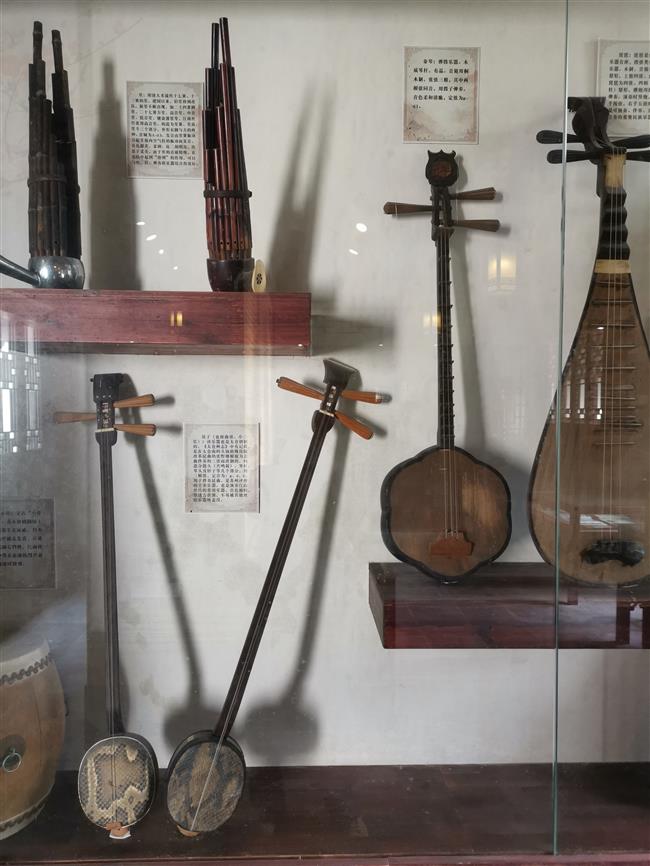 When people watch Kunqu Opera, they seldom notice the accompaniment. But the orchestra made up of traditional sizhu (丝竹) instruments is indispensable to the performance, creating atmosphere and driving the story.

The earliest record of sizhu can be traced back to the Western Zhou Dynasty (11th century-770 BC).

However, present-day sizhu orchestras are built on the foundation of the Ming Dynasty (1368-1644), when musician Zhang Yetang organized the first orchestra in Taicang, a small city at the border of Jiangsu Province and Shanghai.

Unlike Western orchestra that often contains nearly 100 players, a traditional sizhu orchestra only has five to a dozen of people according to different performances.

According to the archives, Taicang boasted more than 100 teams with 1,000 players during the Ming Dynasty. At the center of its repertoire were the Eight Great Pieces (八大曲), which were based on old melodies such as “Slow Six Beats.”

Today, the repertoire has already been enriched, since many were derived from the Eight Great Pieces and contemporary composers have created new pieces according to modern-day aesthetics.

In history, the most noted orchestra was the Wang’s. The Wang family lasted for generations throughout the Ming and Qing dynasties. The orchestra was considered a pilot troupe for both Kunqu Opera and Jiangnan sizhu, and its status was unparalleled.

The Wangs enhanced the status of sizhu music, since it found favor with the literati and scholars. Also, it was from this orchestra that Jiangnan sizhu began to accompany Kunqu Opera. Even present-day performances are based on Wang Xijue’s.

Jiangnan sizhu gradually permeated folk life in Shanghai, Jiangsu and Zhejiang provinces since a batch of popular troupes and orchestras sprang up in this region. No matter for ceremonies, funerals, rituals or festive celebrations, this musical style was used to express people’s emotion and thoughts.

“The popularity was largely attributed to Shanghai. As an open port city in the late Qing Dynasty it had a large audience for traditional music,” Gao told Shanghai Daily. “At the time, Jiangnan sizhu symbolized Chinese music and entered halls of higher education. It played a vital role in cultural exchanges.”

However, this style of music declined with time like other traditions. Western musical instruments dominated and were preferred by youngsters, while sizhu instruments were considered outdated, suitable for old opera performances.

The situation is different in Taicang. Although sizhu lost popularity in other cities, Taicang still boasts a solid base for this music. Early this year, it was dubbed “China’s Folk Art Town” by virtue of its good protection of Jiangnan sizhu.

“There are hundreds of amateur teams and about 30 professional orchestras in Taicang. Music has already become ubiquitous in residential communities and schools,” said Gao. “Every year, they bring performances to local seniors homes, kindergartens and neighboring cities, deeply spreading the influence of sizhu.”

In ancient times, professional orchestras performed in teahouses, temple fairs and wharfs. Sometimes they were invited to play at private get-togethers and banquets. Folk teams also began to emerge centuries ago, which in return laid a solid foundation for sizhu among ordinary Taicang people.

In a bid to boost this ancient music and encourage more natives to join in, the Taicang government started to protect the tradition in the 1990s, aiming to make it a calling card for the city.

In 2006, Jiangnan sizhu was ranked as national intangible cultural heritage by the central government. The same year, the local government established the Jiangnan Sizhu Pavilion to showcase precious archives and musical instruments and put on performances.

Every year, the pavilion hosts about 60 concerts and welcomes more than 30,000 visitors on average. It has also set up branches across Taicang to teach amateur players.

The best 10 local players make up the pavilion’s Wuyang Sizhu Orchestra. It is considered the epitome of top-flight sizhu music.

Since it was established, it has been invited to perform in theaters at home and abroad, including Germany, Italy and Singapore. It also does well in nationwide music competitions.

Many competitions and music festivals are hosted in Taicang every year, giving incentives to outstanding players and teams. Local authorities support these activities by offering rewards and subsidies.

“These competitions have allured students and retired seniors, and given a boost to the development of Jiangnan sizhu,” said Gao, who also is the curator of the Jiangnan Sizhu Pavilion. “Many schools have set up extracurricular classes to cultivate talent and appreciation courses to popularize basic knowledge.” 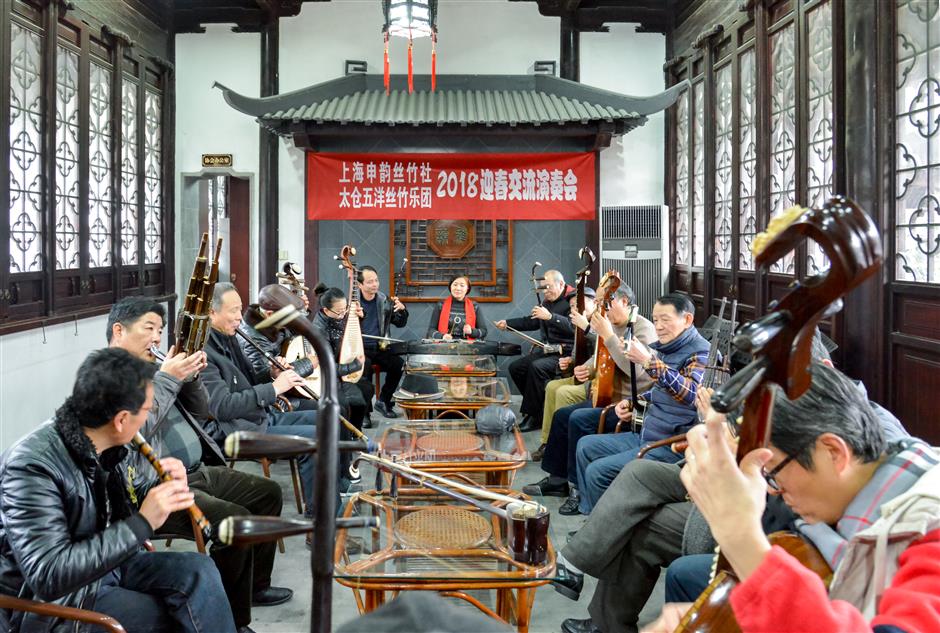 In Taicang, almost every residential community has established its own orchestra, often consisting of seniors. Every year there are around 3,000 concerts in Taicang with about 300,000 citizens taking part.

Among these teams, the Jingrui Residential Community typifies the high caliber at amateur level. Its orchestra has been in existence for less than two years, but recently won second prize in a citywide competition.

The team is comprised of 12 senior residents. Most of them are new Taicang residents and have been learning sizhu instruments for less than five years.

“We have prepared more than seven months for the competition. Practice makes perfect. The rehearsal time is fixed every week and the pavilion dispatched a professional player to guide us,” said Wang Jinzhu, the team leader.

The Jingrui Residential Community Committee provided the team with a free venue, musical instruments and stands. It even rewarded the team with 2,000 yuan (US$290) after it won second prize.

“Their performance level keeps rising due to long time of rehearsal. That in return motivates them and inspires other residents,” said Qian Zhengyu, director of the committee. “Most of all, music make their lives better.”

As for Gao, he hopes more and more people outside Taicang will get to know about this ancient music.

“Kunqu Opera is well protected and most people know a thing or two about it. But its accompaniment, Jiangnan sizhu, still lacks public recognition,” Gao said. “It requires more social support from official departments and aficionados from all walks of life.”