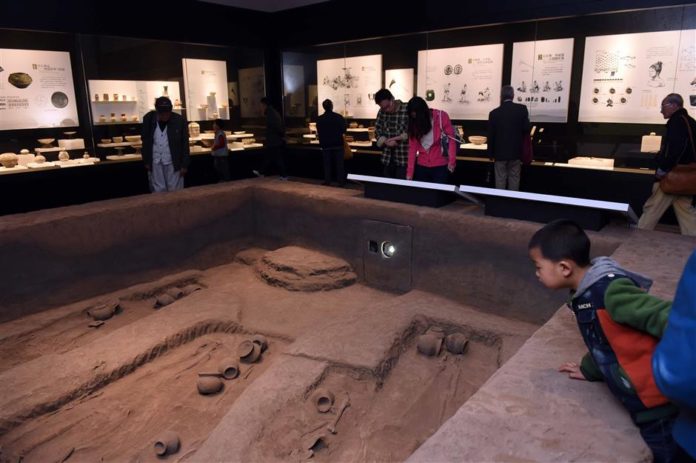 It’s a commonly held notion that Shanghai, which developed from a little fishing village, has a short history of only several hundred years.

However, this misconception was shattered by the archeological discoveries at Songze Village in suburban Qingpu District and the recently opened Guangfulin Relics Park in Songjiang District, which stretches the city’s timeline back about 6,000 years.

Songze Culture, earning its name from Songze Village, is a Neolithic culture that existed 5,300 to 6,000 years ago. It is an important period at the Taihu Lake area of the lower reaches of Yangtze River.

More than 800 ancient items, two old wells and 100 tombs were found in the village between 1961 and 1974, including jade ware, bones, pottery and stone ware. This meant that the Songze people were the earliest ancestors of Shanghai.

It has also been proved that more than 6,000 years ago, people cultivated rice and engaged in other simple agricultural activities with the discovery of stone axes and plows. 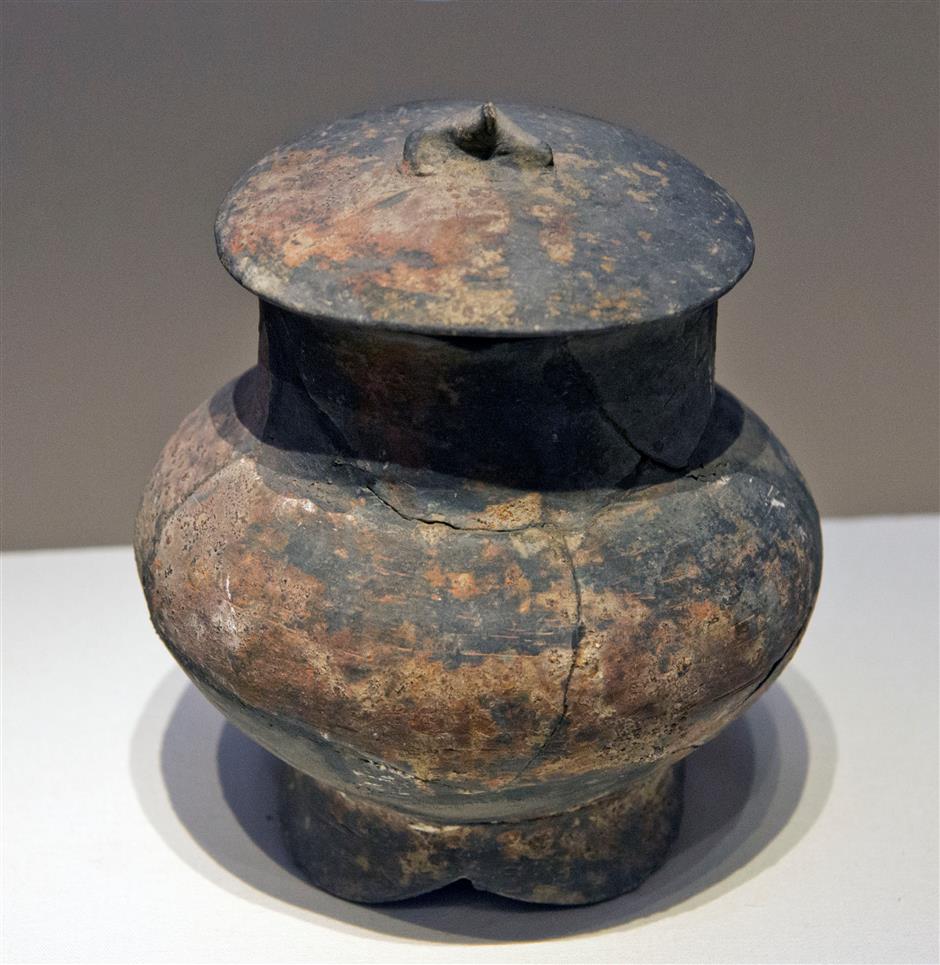 A pot unearthed from the Songze site

It was followed by the Liangzhu Culture 5,300 to 4,000 years ago. Though the main discovery sites were in neighboring Zhejiang Province, some of the archeological items were also found in Shanghai’s coastal Jinshan District, situated at the other side of Zhejiang’s Hangzhou Bay.

The Guangfulin archeological site in Songjiang District was first discovered in 1958 by local farmers dredging a new waterway. In their digging, they found ancient pottery shards. In 1961, archeologists began the first systematic excavation of the site, unearthing a large volume of pottery vases, spinning wheels, cooking vessels and dishes, which proved the existence of a culture that thrived some 4,000 years ago.

The excavation work stretched from 1961 to 2008, when experts found a large number of bronze shards, wooden craft items and turtle shells, which were used to foretell the future in ancient China. They also discovered two tombs. One contained the complete skeleton of a pig, the other holding the bones of a dog. 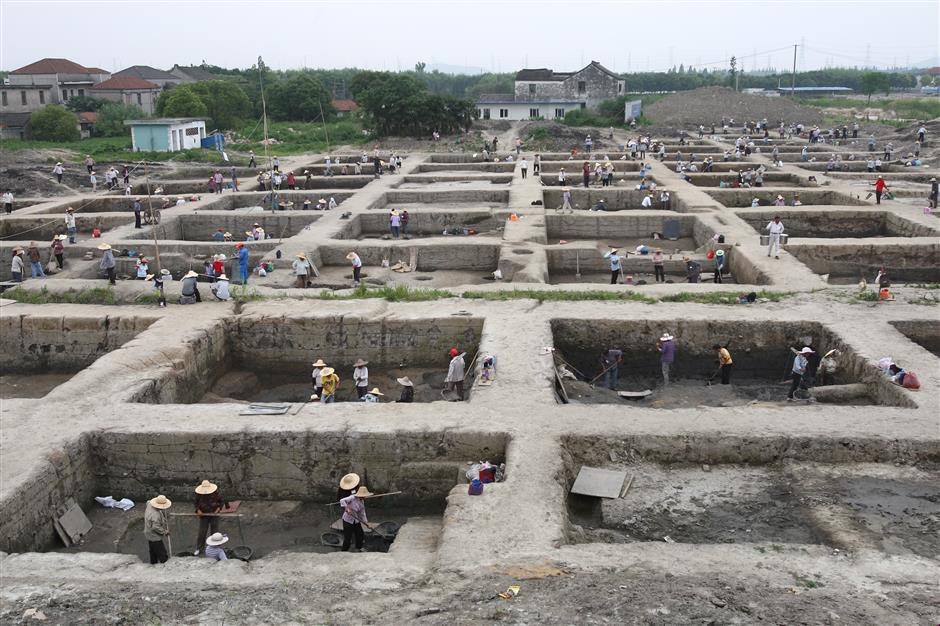 The archeological site of Guangfulin

The unearthed items indicate that the Guangfulin ancestors migrated from the north. They tramped over mountains, waded cross rivers and finally settled down in the city. To some extent, they were the first migrants of the melting pot that is Shanghai. Their living habits were characterized with a trace of a northern lifestyle, while the unfixed funeral traditions reveal that the social structures were quite loose at the time.

In 207 BC, the Jinshan area by the sea was known for producing salt, which was transported to neighboring Wudu (today’s Suzhou in Jiangsu Province). Around the Jin Dynasty (AD 266-420), the place was very prosperous with its fishing and sea salt industries.

In AD 746, the ancient Qinglong Town in today’s Qingpu District was set up as a harbor, from where commercial ships sailed to Japan and ancient Korea as well as other foreign countries.

A dig conducted by a team of experts from Shanghai Museum in 2016 suggests that the area was a busy trading hub and shipping center during the Tang (AD 618-907) and Song (960-1279) dynasties.

The archeologists from Shanghai Museum have unearthed buried sites with Song Dynasty-style architecture, large amounts of porcelain, an iron-casting workshop, the only one of its kind found in Shanghai so far, and a well from the Tang Dynasty, among other discoveries.

More than 6,000 restorable porcelain objects and about 100,000 shards were traced to well-known kilns in Fujian, Zhejiang and Jiangxi provinces. Many similar porcelain items from these kilns have also been found in ancient Korea and Japan.

“They were apparently shipped to Qinglong Town first and then transferred overseas,” said archeologist Chen Jie.

“This proves Shanghai had become a major port for foreign trade in the Tang Dynasty, as well as a critical stop along the ancient Maritime Silk Road.”

Pottery wares from the Guangfulin culture 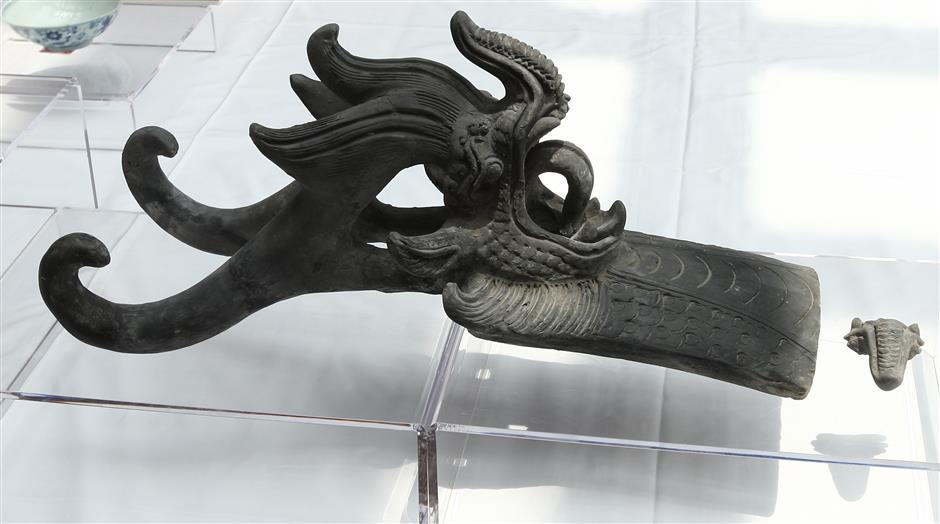 The team’s most important find were the foundations of the historic Longping Temple Pagoda, built in the Northern Song Dynasty (960-1127), which includes an underground vault containing numerous cultural relics.

The brick-laid vault was found to contain a four-layered case, with layers made of wood, iron, gold and silver respectively. The innermost silver layer enshrined a Buddha statue set on a bed of colorful gemstones, while silver chopsticks, silver spoons, silver hairpins and a bronze mirror were discovered in the wooden layer.

Also found in the vault were four small balls in a bronze bottle, three of them made from a crystal-like material. They later proved to be sarire, artifacts made after master monks were cremated.

The octagonal foundations imply that the pagoda, which has long since been destroyed, was larger than other ancient pagodas in the area. It was estimated to have had seven floors and stand 50 meters tall.

“The pagoda served as a religious site and also a lighthouse for merchant fleets sailing on the ancient Wusong River (today’s Suzhou Creek) to and from the sea,” Chen said.

Shanghai opened its port in 1843, since when the city entered its modern era and began to develop into today’s metropolis. 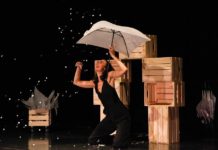 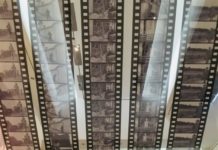 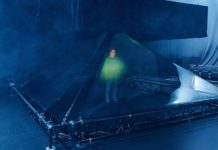