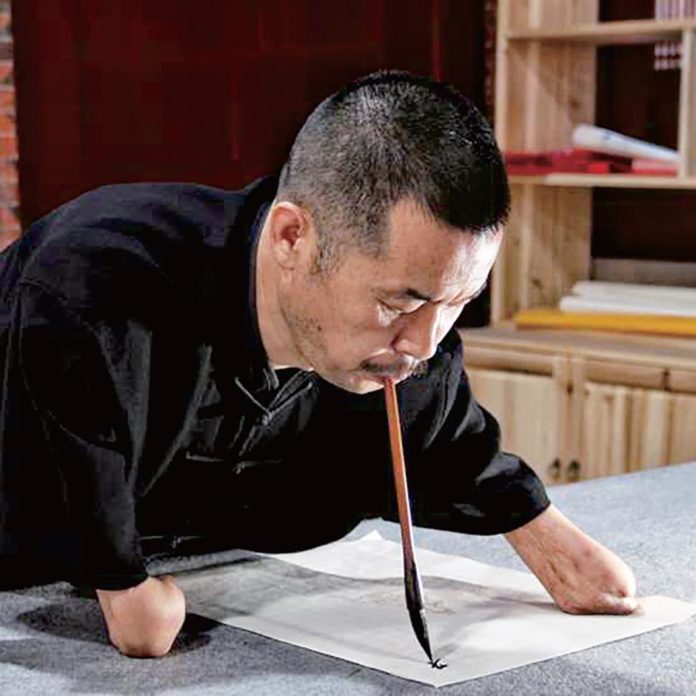 Forty-eight-year-old Zhang Wenyou is an artist with a difference.

At the age of 4, Zhang lost his arms in an accident. But despite the tragedy, the dogged fighter refused to give up and surprised many by earning fame as a calligrapher!

Following the tragedy, Zhang courageously began to learn to use his mouth to write calligraphy on rice paper. As the saying goes, where there is a will, there is a way.

A solo exhibition of his works is currently on display at Shanghai Library.

Wild or elegant, it must have needed lots of practice — and umpteen failures — before Zhang came to perfect the characters. But talk to him, and he hates it when people treat him as a disabled person.

“Please don’t cover my story under the theme of motivation and persistence,” he makes it clear to the media personnel.

“In my eyes, I am not different than any ot:her ordinary people. Art is fair to everyone, and its final function is to be exposed to others, so it doesn’t matter whether it is created by hands or mouth, because they are all part of the body.”

Zhang learned calligraphy when he was a kid, and started off by copying many masterpieces from different dynasties. His mouth turned out to be his lost hands that he not only uses to write calligraphy but types on the computer and receives phone calls as well.

Residing in a temple in Fujian Province, Zhang says his main income comes from writing the Buddhist sutras. Because of years of practice on the sutras and learning Buddhism, Zhang has a particular understanding of the Chinese calligraphy.

“Chinese calligraphy is the essence of Chinese culture and history,” he explains. “It is a self-nurturing process to shy away from the illness and evils. It is also a kind of wisdom that takes you to a higher spiritual level. I find myself free from any shackles when writing on the rice paper.”

In 1997, Zhang was invited by the abbot of the Zhenru Temple in Shanghai to write a 400-meter-long “Lotus Sutra,” which took him nearly eight months to complete. In 2000, his “A Note on the Peach Blossom Yard” was carved into stele on the campus of the Ruhr University in Germany. In 2012, his “Avatamsaka Sutra” that took about five years to complete was picked up by the Cheng Tian Chan Temple in Quanzhou, Fujian Province.

“Even for a man with hands, it is difficult to achieve such a high calligraphy level,” commented Shi Jianbang, a renowned local art critic.

“Zhang’s unique calligraphy is not based on hard practice, but his own interpretation of the aesthetic taste of calligraphy itself.” 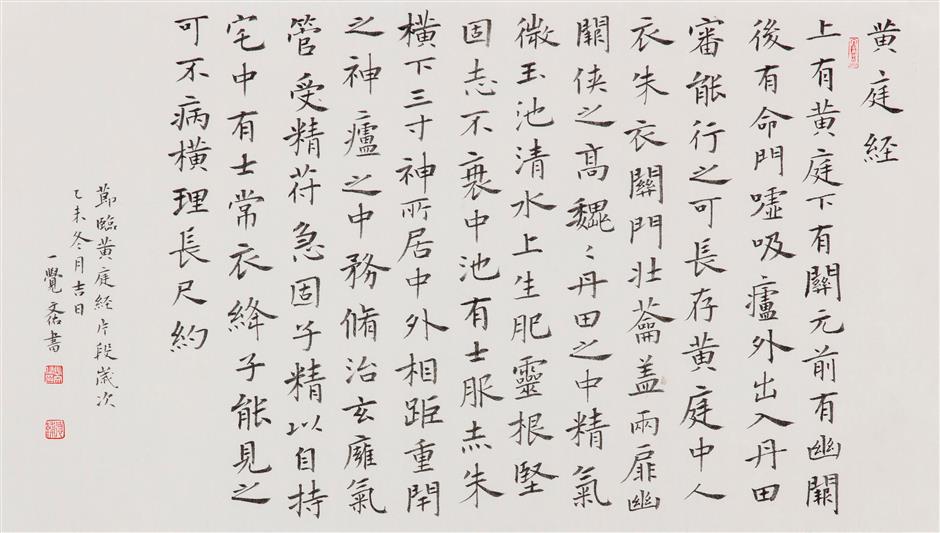