A look at the present state of the medium as a 1999 show closed by the authorities in Shanghai is re-staged.

An installation by the Chinese artist Xiao Lu entitled “Dialogue” consists of two phone booths, one containing a life-size photograph of a man and the other a life-size photograph of a woman. Both figures are seen from the back; neither seems to notice the other. “Dialogue” was included in China Avant-Garde, a group exhibition that opened at the National Art Museum of China in Beijing on February 5 1989, the eve of the Chinese new year. Two hours after the show opened to the public, Xiao, 26 at the time, smuggled a gun into the gallery and fired two bullets at the centre of her piece.

Her actions later became known as “the first gunshots of Tiananmen”: four months later, those famous protests and their violent reprisals unfolded in Beijing’s main square. Xiao’s shooting performance led the authorities to close the entire exhibition permanently. A photograph of Xiao’s dramatic intervention, taken by an anonymous friend, is the only remaining document of China Avant-Garde. It is currently on display at Tate Modern in London, and is in the process of being acquired by the museum. “Xiao Lu, and the group of New Wave artists she was part of, are integral to understanding the development of Chinese contemporary art,” says Victor Wang, curator of Shanghai Photofairs. Next month at the fair he is restaging a 1999 exhibition of contemporary Chinese photography inspired by Xiao’s protest called Wùshìrénfēi, which translates as Things Have Remained The Same, But People Have Changed. 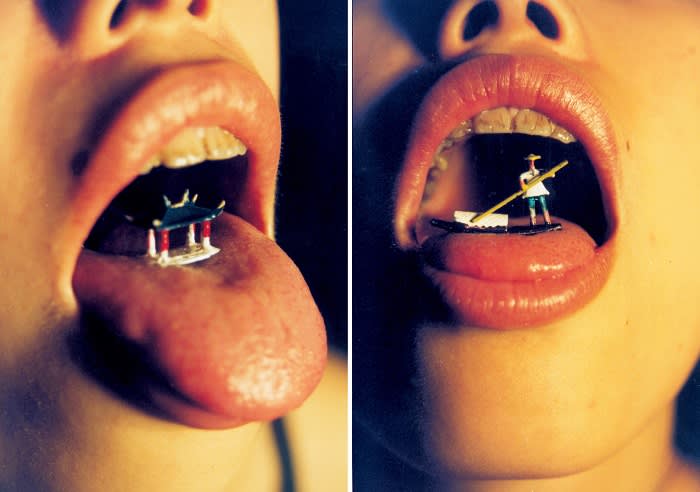 After Xiao fired the shots, she was detained, and later left China for Australia, where she spent the next decade. She then returned to China and continues to practise installation art, along with performance and video art. “Throughout the 1990s, there was a huge explosion of art in Shanghai and across China,” Wang says. “The artworks created throughout that time were both a legacy and product of the New Wave.” Yang Fudong’s ‘The Evergreen Nature of Romantic Stories’ (1999) Wang and his colleague Davide Quadrio, founder of Shanghai’s BizArt Art Centre, estimate that up to 100 exhibitions in the city were closed by the authorities in the 1990s. “The majority of contemporary art in China therefore sits in an unofficial history,” Wang explains. “An oral history that is not necessarily state-backed or sponsored.” Wùshìrénfēi was scheduled to open at 859 Tian Yao Qiao Road, Shanghai, on September 4 1999. But, on the day of the opening, it was abruptly shuttered by the Chinese authorities.

It would have been one of the city’s first exhibitions dedicated to fine art and conceptual photography. When Wùshìrénfēi opens — in full for the first time — next month, it will be shown alongside an exhibition of work from a new generation of Chinese photographic artists. That Wùshìrénfēi has passed the censorship test has surprised many, not least the artists themselves. It is being billed as the great unseen exhibition, showcasing a generation of artists — including Geng Jianyi, Yang Fudong, Liu Wei, Hu Jieming, Xu Zhen, Liang Yue, Chen Xiaoyun, Yang Zhenzhong and Xiang Liqing — now recognised as pivotal to the development of contemporary Chinese art and integral to the way Chinese society is viewed by the rest of the world. “At that time, for an exhibition to be cancelled was a very normal thing,” says Liu, who took part in the original exhibition.

“Basically, no exhibitions were permitted to be on display for more than a few days.” Xu, who also exhibited, says: “In 1999, the art world in China was relatively simple — there were no art institutions, no galleries. There were only artists with a passion for art.” Chinese artists are very astute at engaging and observing the government’s invisible hand Liu Heung Shing Shanghai PhotoFairs, now in its fifth year, has proved popular, with 30,000 visitors last year. The fair’s presence in Shanghai has coincided with a dramatic expansion of artistic infrastructure in the city.

Since the fair’s first edition, four dedicated photography museums have opened in the city and there have been more than 70 photography exhibitions. With this new-found interest comes a burgeoning native art market. Increasingly, Chinese collectors are buying Chinese art. And photography has become the medium of choice for many collectors. Juliet Hacking, a photography specialist at Sotheby’s Institute of Art and author of the forthcoming Photography and the Art Market, says there has a been a fundamental shift in the attitude of western auction houses and dealers towards the Chinese art market. “[They] used to ask how [they] could encourage western collectors to buy Chinese works,” she says.

But now it’s about “how we can encourage Chinese collectors to buy Chinese works”. But this rapidly developing market exists under a one-state system that retains a high level of censorship. Since Tiananmen Square, Chinese photographers have mastered the art of creating multivalent, metaphorical or symbolic work, which evades censorship by dint of ambiguity. Hacking says: “[Chinese artists] always have to ask themselves: ‘If I want to get my work seen, how can I say what I want to say?’ They’ve developed a very clever way of negotiating that line between the political and non-political.”

“The Chinese economy accelerated at a speed no one expected,” he says of the decades following Wùshìrénfēi. “Suddenly contemporary art became part of the mass culture of owning material possessions.” And this commodification, he says, has helped to alleviate the censors’ fears around art. “Compared to [the art] the government saw in 1989, the government [today] is breathing a sigh of relief.” Sarah Fisher is director of Open Eye Gallery in Liverpool, Shanghai’s official “twin” city, and curator of the current This Is Shanghai exhibition, which includes many of the same artists as Wùshìrénfēi. “Chinese artists are interested in evolution, and why wouldn’t they be?” she says.

“They tried revolution, and it didn’t really work . . . We should understand that the Chinese people are bringing their government with them.” The mere existence of Wùshìrénfēi in 2018 might suggest a softening of the country’s censorship programmes and a more tolerant attitude towards its artistic communities. But many artists who have spent their careers in China would disagree. Liu says the Chinese government’s quest for control has not, in his opinion, subsided. “The invisible hand of the Chinese government is always there,” he says. “And Chinese artists are very astute at engaging and observing this invisible hand.”

As China looks set to strengthen its position in the global photography market, Wùshìrénfēi could prove a landmark moment — a timely recognition of a movement of artists who created work without hope of being seen, heard or shared, but who nevertheless laid the foundations for the fertile and inter­nationally-facing artistic community in Shanghai today. Jiehong Jiang, director of the Centre for Chinese Visual Arts at Birmingham City University, grew up in Shanghai and has worked closely with many of the artists who exhibited in Wùshìrénfēi.

“All the artists are surprised that [PhotoFairs] are going to reproduce this particular show,” he says. “I don’t know how this is going to go down [with the authorities]. In my view, it’s pretty impossible . . . because it was shut. Unless the authorities forgot about it, or have completely changed their strategy . . . Let’s wait and see.”