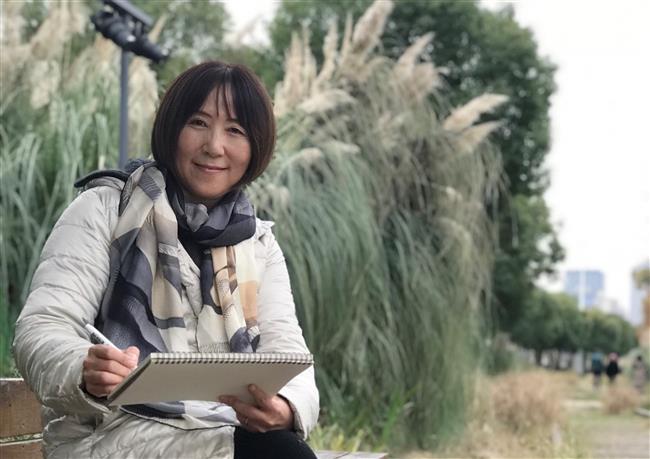 But finally, the decadelong, labor-of-love project, a 70-meter-long ink-wash painting, was finally unveiled at the Shanghai History Museum last month.

The panoramic artwork begins from Anji, Zhejiang Province, the source of the Huangpu River, and then meanders through Wusongkou Wharf, Lujiazui, the Bund, Shanghai Museum, Shanghai Concert Hall and finally to the Square Pagoda Garden in Songjiang. The complete scroll includes 128 well-known venues.

“There have been many dramatic changes in Shanghai, and I tried hard to catch the ‘speed’ of its development through my brushstrokes,” said Zhang.

Zhang started “Spectacular Shanghai” in 2009. The following year, her work, stretching 20 meters long, was displayed at the Shanghai World Expo.

But at that time the 20-meter-long scroll, in the eyes of the artist, was “unfinished.” She later resumed work on the painting, adding new local landmarks and achievements.

“Shanghai is always ‘growing,’ filled with amazing vitality and energy,” she said. “So in the past decade, I visited many new landmarks, rising one after another in the metropolis, in the hope of fitting them all into this scroll.”

Born into an artist’s family, Zhang’s father, Zhang Daxin, was a renowned “New Year Painting” artist. She remembers as a little girl, how her father made her sister and her pose in front of the camera for hours just for him to take pictures for his later drawings. At that time she had no idea what was going on.

Yet, the snaps, pictures and drawings of those two little girls with chubby faces became a nationwide phenomenon that swept the country after appearing at a New Year Painting exhibition in the 1950s.

As her father wished, Zhang began to learn ink-wash painting at the age of 7. Now she has established herself as an artist in her own right.

“I like to ‘dance with the nature’,” she said with a smile. “I want to reflect the movement that nature endows on me.”

Unlike some of her peers who prefer to isolate themselves in a studio for creation, Zhang chooses to go outside and be close to nature. Every year, she travels extensively to sketch.

“Frankly speaking, it is not easy to be a female landscape artist, because it is very risky to climb a steep mountain to the top,” she said. “But I also have my own advantage, because as a female artist, perhaps I am more sensitive and straightforward in expressing my emotions.”

Zhang confessed that at the beginning she was a bit concerned about the scroll because she was not so familiar with subject of urban architecture.

“After all, I am not painting a map, and I can’t paint whatever stretches in front of my eyes,” she said.

“Also this work needs to reflect the culture and history of the city with an artistic ambience. So this is actually quite a big challenge for me.”

During the 10-year-long creation period, she sometimes encountered her “bottleneck.”

“Guess what, I often looked out of my window at home and got lost in the scene outside,” said Zhang, whose apartment is sited along the Suzhou Creek. “When observing a different sunset or dusk in different weathers and seasons, I would find my inspiration.

“In my eyes, those forest of high-rises from afar became blurred and slowly transformed into different mountain shapes. Doesn’t this sound amazing? It seems that I finally found a balance or harmony in the city and nature.”

Zhang adopted a realistic style fused with an implicative style on rice-paper. She also adjusted the proportion of the architecture to make it look more appealing in the painting.

She frequented almost every corner in the city with her sketchboard.

“I was fortunate that many friends helped me to find a perfect angle for my sketches,” she said. “For example, the seventh terrace of a local hotel near the Bund or an old villa overlooking the downtown scene.”

Zhang says “Spectacular Shanghai” is not merely about new Shanghai.

“It would be more interesting to combine both the old architectures with the new ones in the same tableau which evokes profundity and depth of the city itself,” she said.

However she was worried the city was changing too fast, and thus breaking things in the process of development.

“As I finished my sketches and looked up, I would always find there were new buildings emerging which didn’t exist in that area,” she said with a chuckle.

“For example, I was drawing a vast piece of lawn and, several months later, I found a new Shanghai Children’s Library was under construction. What a speed! Some of the sketches became ‘past tense’ within days. I hope that this scroll will be part of the memory for me, for the city and for the people living in it.”

Zhang has donated her painting to the museum, where it can be found on the second floor of its east wing through October 27.