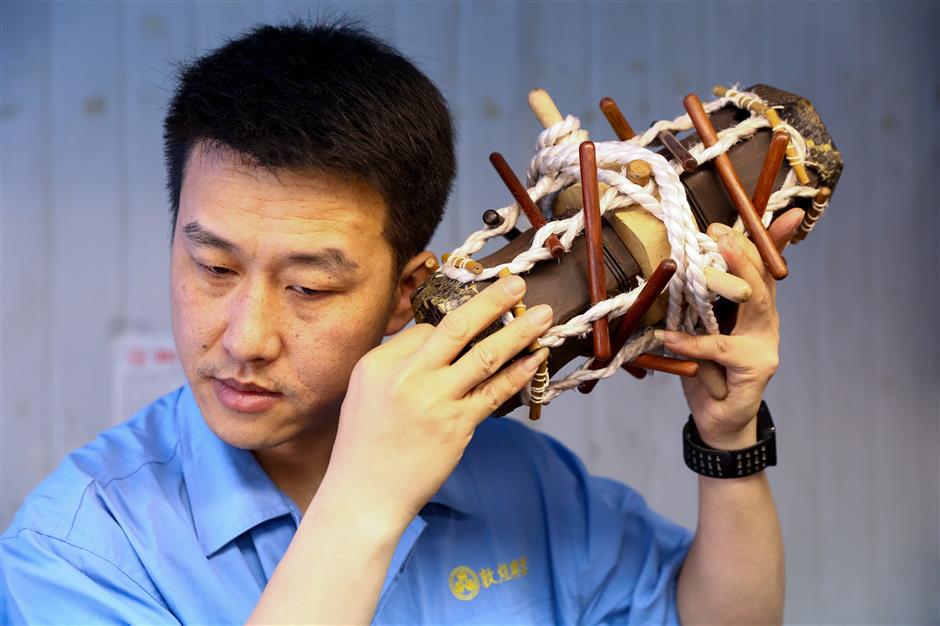 While the instrument today is largely manufactured on assembly lines, there are still masters of the ancient craft of handmade erhu. One of them is 38-year-old Cao Rong.

A worker at the Shanghai No.1 Factory of Chinese Musical Instruments, Cao was among the first recipients of the annual “Shanghai Standouts” awards, which promote excellence in the workplace.

The erhu has a long neck connected to a sound box covered with python skin on the front. Its characteristic sound is produced through the vibration of the python skin when the strings are bowed.

“Every erhu is different,” Cao said, referring to the use of the python skin and aged wood in making the instrument.

There have been attempts to replace python skin with other biological or man-made materials, but none produced the same pure sound.

Cao said the python skin lasts much longer due to its unique fibers and elasticity, and the most prized skins are those with larger scales and vibrant patterns. The skins come from certified snake farms.

The skin must be tightly stretched across the sound box.

“The high notes will be affected even when there is a gap of only half a millimeter between the skin and the sound box,” Cao said.

The small and usually hexagonal sound box is made from hardwood called laohongmu, or “old redwood,” in China. It’s important that the wood is so old that it won’t shrink much. That means wood is ripe for use after a tree has grown for a few hundred years. 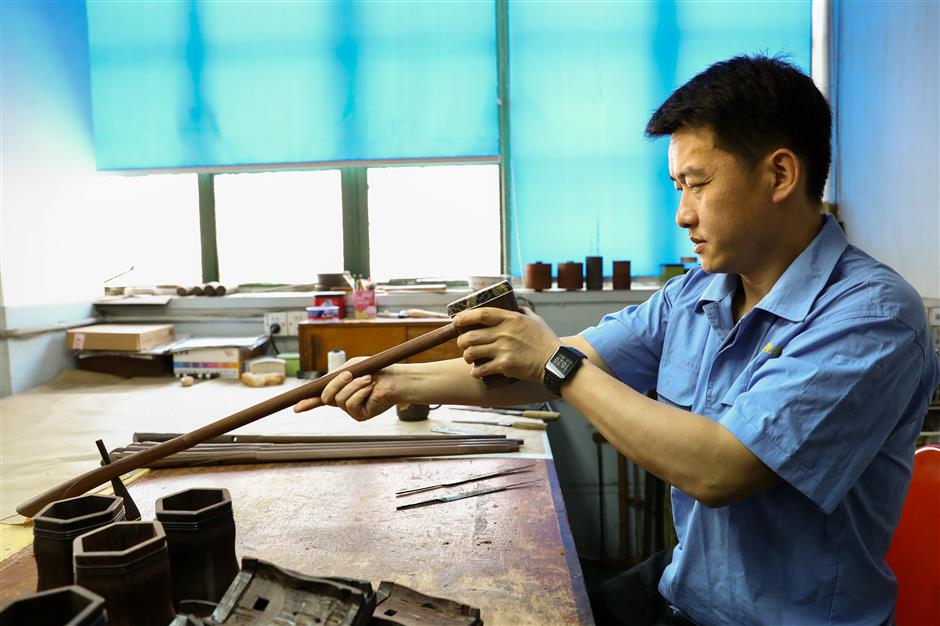 Cao Rong checks a piece of python skin he mounted on the sound box of an erhu. 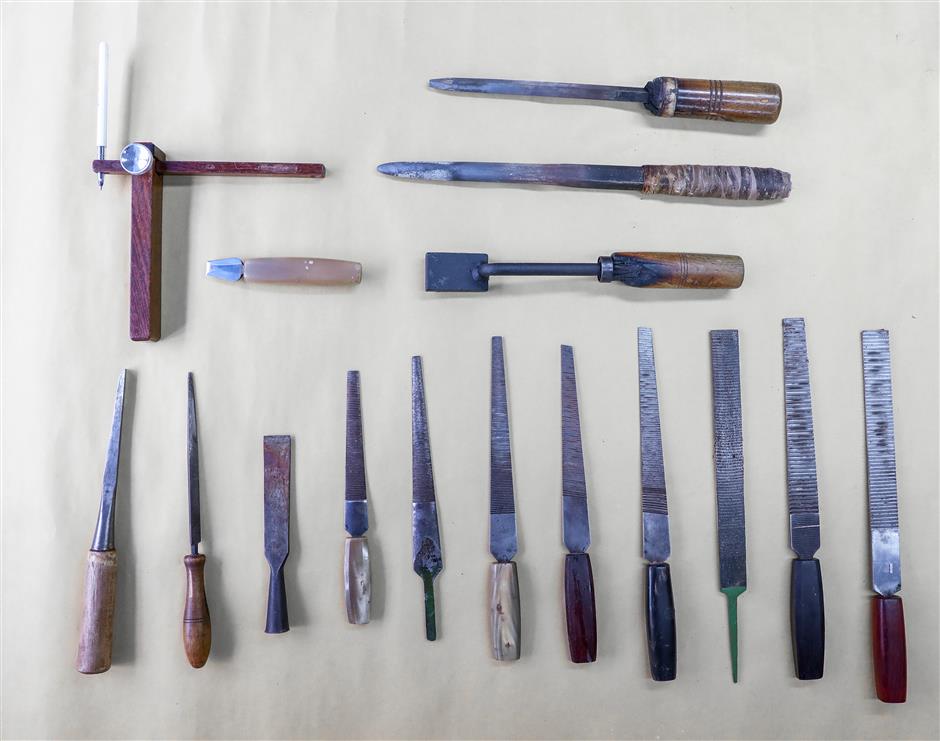 Some of the tools of the trade Cao uses in making an erhu. As an apprentice, he learned how to make them all by hand.

When making erhu for musicians who live in the north of the country, which is drier than the south, Cao has to ensure that the wood is absolutely dry before using it to make an instrument.

Experienced masters hold a piece of wood to the ear, knock it with the knuckle and immediately know if it’s ideal for making an erhu.

Cao said there are more than 100 steps in making an erhu, and it takes a craftsman years to develop the subtle techniques to make erhu of different tones that may be indiscernible to the undiscriminating ear.

“Some prefer a softer sound, while others like it sharper,” said Cao. “There is no one standard for making an erhu.”

While traditional erhu music, such as “Er Quan Ying Yue” or “The Second Spring Reflecting the Moon,” are often slow and contemplative, contemporary professional musicians often prefer faster tunes with a wider range of notes. That challenges erhu makers to craft instruments that are more versatile and precise, Cao said.

The maximum range of the erhu is three-and-a-half octaves, from D4 up to A7. 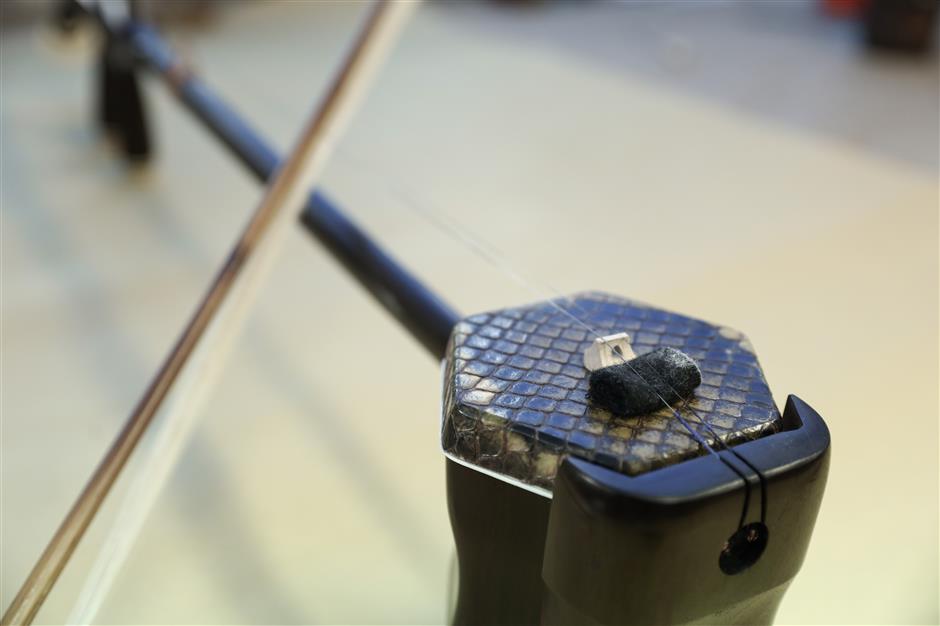 It takes more than 100 steps to handcraft an erhu. 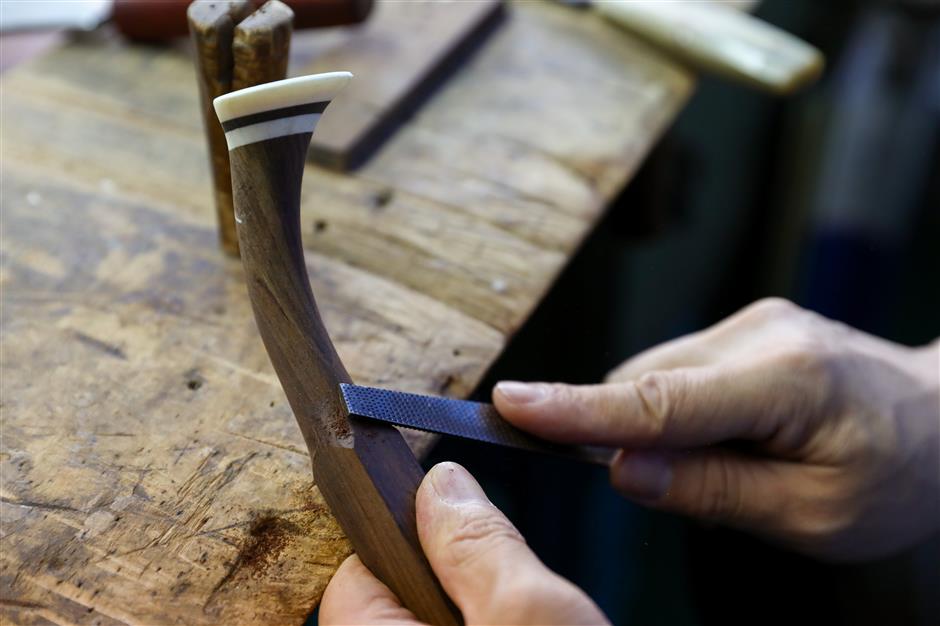 Cao perfects the shape of an erhu part.

Beginners and especially children are advised to learn on a “softer” erhu.

“Erhu for professionals have strings that are harder to press and produce a harsher sound, which is not good for children,” Cao said.

Making the erhu is a demanding job. Cao said his hand often shakes for a long time after using a saw on the neck. The hardest part, he said, is keeping to a high standard and never cutting corners.

“If one leaves the rough surface and glue stains inside the sound box untreated or fails to get the angles of the wood exactly right, the sound will be affected sooner or later,” he said.

Cao makes about 20 erhu a month. The factory said over 80 percent of them are rated top quality.

Besides the erhu, Cao is also skilled at making about a dozen kinds of huqin, or bowed string instruments, but demand for some of them is almost nil anymore.

Cao, a Shanghai native who was born in a village of what is today’s Zhuanqiao Town in Minhang District, started to work as an apprentice at the factory when he was 19 years old.

Cao said he was always fond of working with his hands but didn’t have much knowledge about musical instruments until he started to learn to play the erhu.

“I was only looking for a job,” he said of his apprenticeship at the musical instruments factory. “To be honest, I’m not sure I would have chosen that if I were looking for a career today.”

There were about 30 apprentices when Cao started out, but most left in the end. Cao is now the youngest top master at the factory and has one apprentice.

Low pay, a dusty working environment and the dangerous tools of the trade tend to discourage workers from the industry.

But despite the changing times, the craft is still steeped in tradition.

“At the very beginning, apprentices are told to make their own set of tools by themselves,” Cao said. “This is both a ritual and an effective method for them to become devoted to the job.”