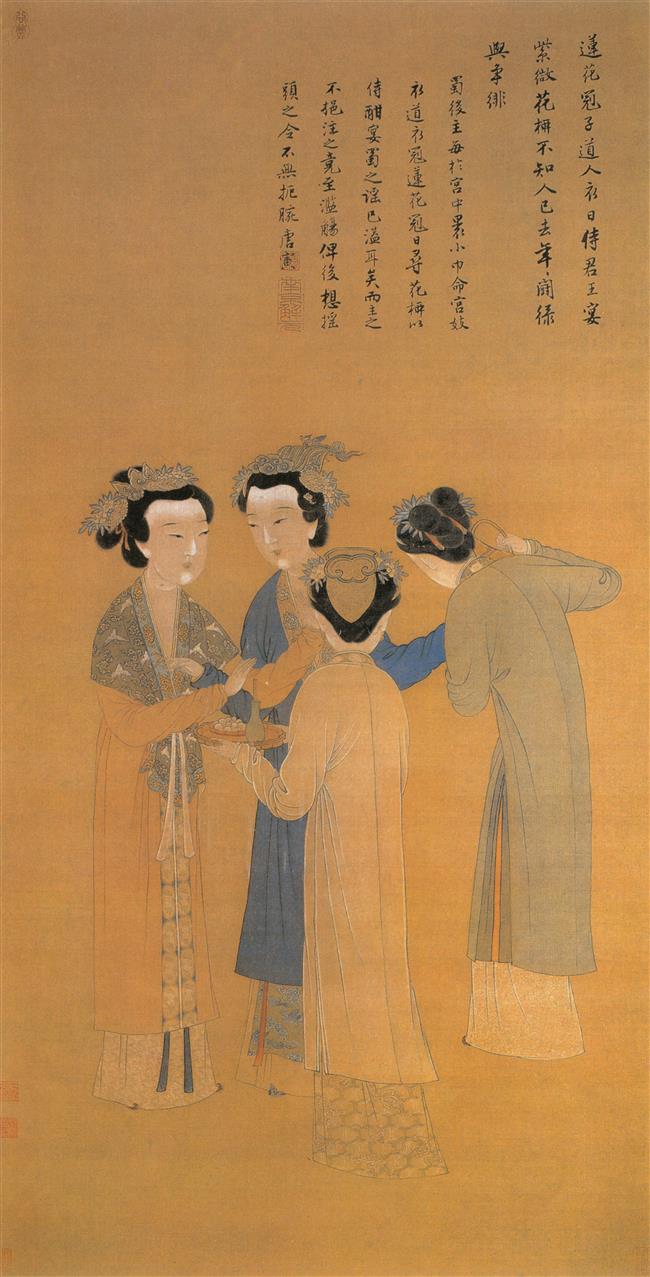 As one of the oldest and most important genres of traditional Chinese painting, figure painting saw a revival in the Ming Dynasty (1368-1644) after decades of decline in the previous dynasties.

Ming artists not only inherited styles and techniques of traditional Chinese figure painting, but also created a number of new forms, color tones, brush work skills and artistic expressions for their own artworks.

Particularly the 仕女画（shinuhua), or painting of beautiful women, which portrayed the insular world of women from the elite, reached a new level of aestheticism and sophistication.

One of the most exemplary works of the genre from that time is Mengshu Gongji Tu, or Court Ladies of the Former Shu State, a masterpiece painted by Tang Yin (1470-1524), one of the great artists of the Ming Dynasty.

Tang’s painting, a 124.7 x 63.6 cm, ink and color on thin silk hanging scroll, depicts four standing court ladies of the Shu State (AD 891-925). The two facing viewers are likely of noble status and the other two seen only from the back are mostly likely court servants.

While the servant on the right refills a glass of wine for the lady in dark dress, the lady in the red dress appears to be trying to persuade her already tipsy friend to stop drinking. 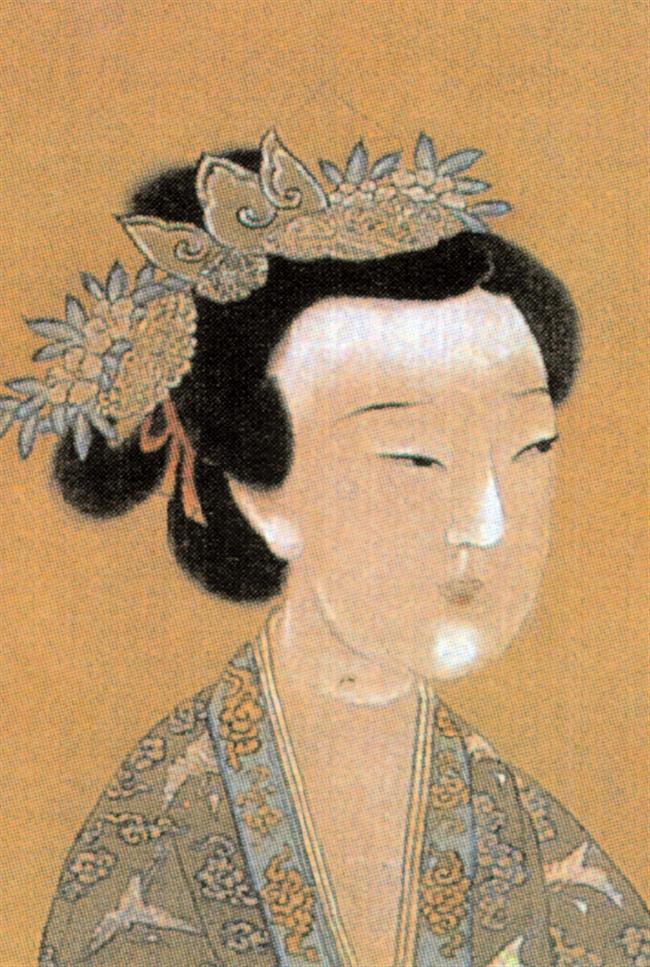 Tang liked to use white color to highlight the forehead, the bridge of the nose and the jaw. His followers called this method sanbai, or “three whites.”

Painted in the 工笔重彩 (gongbi zhongcai), or fine-brush with heavy color style and with literally nothing in the background, the artist used fine and yet dynamic brush strokes to paint the ladies’ dresses and applied the traditional 三白（sanbai ) technique by using extra white color for the foreheads, noses and chins to bring out the makeup of the ladies.

The clouds, flowers and leaves of the ladies’ coronas as well as the motifs of their dresses are all painted in bright, noble colors.

This artwork has long been praised by Chinese art critics as one of the best in Tang’s paintings of women. However, the reputation of this painting seems almost trivial when compared with the eccentric and colorful personal stories of the artist himself.

Calling himself “the number one talented and romantic scholar in southern China,” Tang has been a household name for centuries. His stories have appeared in numerous novels, movies and TV shows.

Born into a small merchant’s family in east China’s Jiangsu Province, Tang was a very diligent student in his childhood and soon excelled among his peers for his exceptional talent in painting, calligraphy and poetry.

His talent was noticed by the father of his close friend Wen Zhengming (1470-1559), who later also became a prominent painter, calligrapher and scholar. The senior Wen recommended Tang and his son to study painting at the local Wu School.

The following year, he went to the capital to take part in the imperial palace examination, the highest level of such exams, but unfortunately, he was implicated in a bribery case and consequently thrown behind bars. Although he was released one year later, Tang was barred from imperial exams for the rest of his life.

Disillusioned, Tang returned to his home in Suzhou and began to live on selling books and paintings at a time when such “commercial” painters first appeared in the country.

Tang was a very versatile painter. He was not only extremely good at painting women and other figures, but also enjoyed wide acclaim in landscape as well as bird and flower paintings.

Tang was also known far and wide for his romantic stories. One story says that Tang once got a glimpse of a housemaid of a high-ranking official and immediately fell in love with her. In order to find opportunities to approach her, Tang sold himself as a slave to the official’s family.

Later, with the help of his friends, he eventually succeeded in bringing the housemaid home.

So even today, Tang’s name remains a synonym of talent and romance in China. Tang’s masterpiece Court Ladies of the Former Shu State is now housed in the Palace Museum in Beijing.

Type: Ink and color on silk