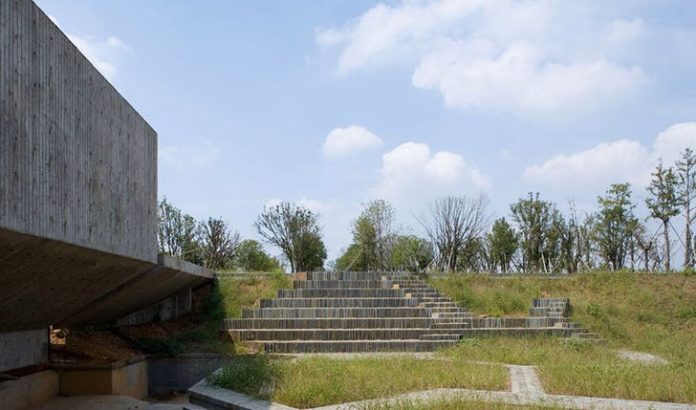 From the Ground Up is a series on Archinect focused on discovering the early stages & signs of history’s most prolific architects. Starting from the beginning allows us to understand the long journey architecture takes in even the formative of hands and often, surprising shifts that occur in its journey. These early projects grant us a glimpse into the early, naive, ambitious and at points rough edges of soon to be architectural masters.

In this installment, we look at Ai Weiwei. As a contemporary artist, architectural connoisseur, and builder, Ai Weiwei produces an interesting lens into what it means to build with Architecture.

Ai Weiwei has partaken in a plethora of significant architectural projects during his artistic career. His first built project is a work built upon his return to China in 1999. He has since taken part in various consultation and design projects, many of which were done in collaboration with Herzog & de Meuron such as the Beijing National Stadium and the Serpentine Pavilion. Yet, we can go back a few more years and settle on the Jinhua Architecture Park as a key marker and perfect intersection of Ai Weiwei’s artistic and architectural ambitions and tendencies.

Jinhua is a small city southwest of Shanghai with an ancient history and a thriving economy based on industry, agriculture, and tourism. It is the last place one would expect a contemporary and impressive collection of architecture to exist. Yet, in 2002, designer and curator Ai Weiwei invited 16 architects from around the world to design a pavilion for a park on a ribbon of land stretching over two kilometers along the Yiwu River. The Park itself is dedicated to the memory of his father, the poet Ai Qing, who was born In Jinhua.

The initial steps were somewhat unusual considering the nature of the public relationship between Ai Weiwei and China, but at the time, Ai Weiwei was asked by the city council to develop a park and a small museum on a long narrow site (80 x 2,200 meter circa) north of the river.

Ai Weiwei came up with a collective project and brought in other architects and designers – 5 Chinese and 11 international – to contribute to the realization of this green area. As a result, seventeen public pavilions, that mainly utilized local materials, rose up along this strip, each with its own architect or designer’s cultural imprinting.

Each practice was assigned a function or program based off a lottery and was given complete design freedom as long as certain financial limits were not passed. This untraditional format of creation, constraint, and freedom is what caused such an eclectic outcome.

While Ai Weiwei never studied architecture, much of his work has evolved with and parallel to Architecture. With his constant collaborations with Herzog & de Meuron becoming increasingly impressive, it is easy to see the Architecture in Ai Weiwei.