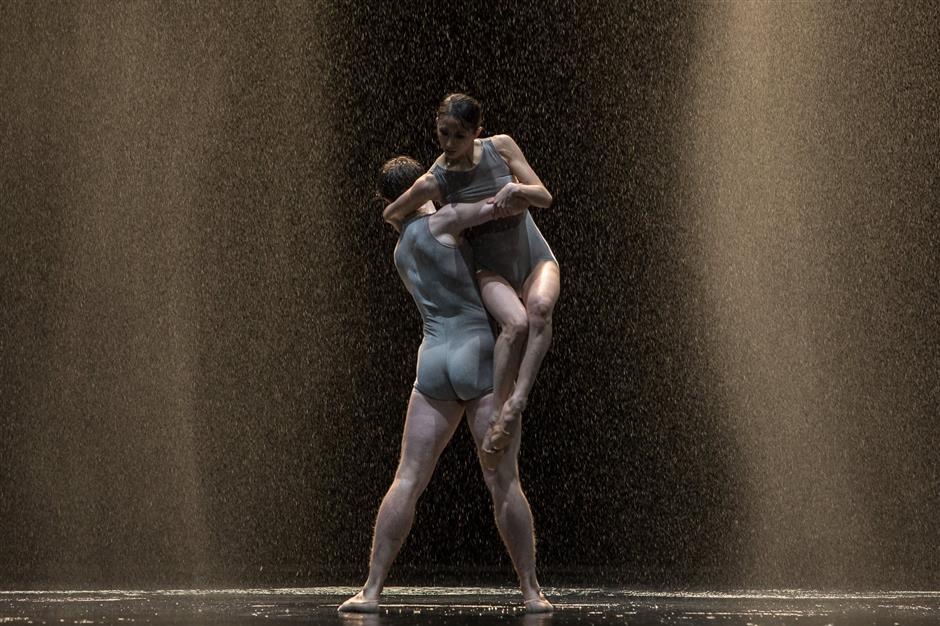 Retirement is out of question for Yen Han, a prima ballerina with the Zurich Ballet, in Switzerland, for the past 25 years. The 46-year-old is not shy to reveal her age and feels proud she is still in peak condition at this time in her life.

“People asked me if I would retire when I had my first baby. They asked again when I had my second, and now they don’t ask because they know it is old news for me,” Yen said.

“I have a husband who is very supportive. I’m the soloist of the Zurich Ballet, where I am still appreciated, and I opened a ballet company last year. I couldn’t possibly do what I am doing now when I was at the age of 20. So, the best is yet to come.”

Born in the 1970s in Vietnam to Chinese parents, Yen later moved to the United States with her family where she finished her senior high school education. She was then trained by Stefan Mucsi and Paul Maure in Los Angeles and furthered her studies at the Beijing Dance Academy between 1989-91.

She was a semifinalist at the “Prix de Lausanne,” a member of the Jeune Ballet de France in Paris and the Ballet de l’Opéra de Nice in France.

Yen’s big moment came in 1994 when she landed her first big role, “Firebird,” choreographed by Michel Foline, a reconstruction work of Nicholas Beriozoff, at the Zurich Ballet Opera House.

“That was the turning point in my life,” Yen said. “With Ballet Zurich, my career took off. During the years I have been a member, the company has become one of the best in Europe. I have survived three directors so far, and with them, I’ve toured throughout Europe, North and South America, Africa and Asia.” 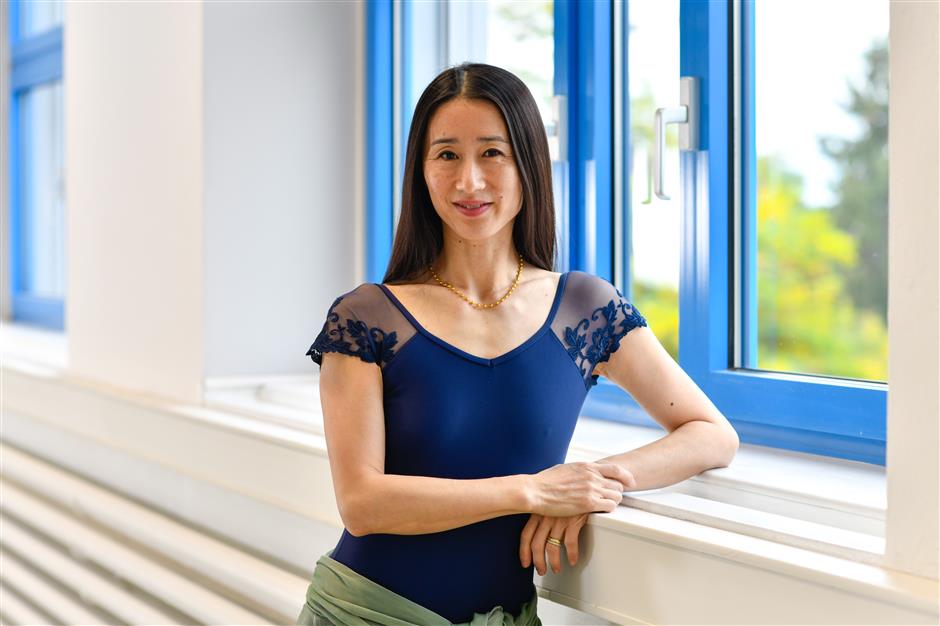 Yen Han is one of the most popular and versatile prima ballerinas of the Zurich Ballet.

As a dancer, Yen is endowed with an exceptionally expressive personality and artistic imagination, paired with an impeccable classical technique. She covers an immense variety of contrasting characters from the great classical repertoire to modern dance.

“You need to be open-minded to work with choreographers,” said Yen, who recalls her first change of heart from the traditional choreographies of the great classical repertoire to the modern dance theater when she performed in Mats Ek’s “Kinderszenen,” and “Scenes from Childhood.”

“It’s a different way of using your body, in which you are light and floating, yet grounded at the same time,” she said. I like the feeling of being grounded. Moreover, it helps me to be a better dancer in which I can articulate myself more freely and properly.”

With big-name choreographers such as Heinz Spoerli, Bernd Bienert, Jiri Kylian, Mats Ek and Christian Spuck, who created numerous new roles and revolutionary visions of classical ballets for her, Yen keeps broadening her repertoire with new works and fresh interpretations of the classics.

Her comic talent found an outlet in a role Spuck invented for her in his new ballet “Nussknacker und Mausekonig” in October 2017, where she is featured as the female clown. Her touching musicality, her persuasive acting, naturalness and grace, her poetry, but also her great expressive power make each of her interpretations unforgettable.

In 2012, Yen and her husband Matthias Zinser founded the Yen Han Dance Center in Zurich. As artistic director of the ballet school, she developed managing skills in planning and organizing the school’s syllabus, assembling a team of teachers, evaluating students and preparing them for international competitions or auditions, as well as dealing with representational and communication matters. Last year, the couple launched a ballet company, as a subsidiary of the dance center in Kusnacht near Zurich.

“Besides creating ballet performances, we act as an agency for dancers, and choreographers. We produce dance events, tours, academic programs with master classes and a choreographic platform to exhibit new talents,” Yen said. “I’m never shy to ask for money for art, to give chances to ballet school students so they can participate in our projects and get a professional practical experience.

“So, I’m grateful to Shanghai International Arts Festival for having us. I would like to thank Shanghai Ballet for their collaboration and Pro Helvetia Shanghai for their part sponsorship with this project.”

This time, as part of the Shanghai International Arts Festival, the Yen Han Ballet Company will be presenting the world premiere of “Creations” on Sunday using 15 junior dancers of the Shanghai Ballet with Yen as a guest ballerina. The production is divided into two chapters: “Thoughts of a Silent Night” and “Echo of Shadow,” by two of Yen’s house choreographers Filipe Portugal and Ken Ossola respectively.

“Thoughts of a Silent Night” will be a manifestation of human thoughts. It is mostly during the silence of the night that our thoughts scream out loud inside of our head. These thoughts are struggles, fears, doubts and thoughts of happiness and love.

“The title of this chapter of dance comes from the Tang Dynasty (618-907) poet Li Bai,” said Portugal, who admitted he did take time to do research and find Jean Sibelius’ violin concerto, which is best at revealing the tension of the movements.

A dance partner to Yen for the past 15 years, Portugal dances in a large amount of neoclassical and contemporary works. His roles include the male leads in all the great classics, as well as in a series of new ballets by Heinz Spoerli and Christian Spuck. Since 2001, he has created 18 of his own successful ballets, which were performed by the Zurich Ballet and its Junior Ballet, Charlotte Ballet and Stuttgart Ballet.

“Echo of Shadow” is about a search for a place and time where a body becomes the medium for a shadow and echo. How do emotions echo within? How is our own shadow provoked to reveal itself to us? By reflecting on those two questions, Ossola says he choreographed this dance to explore the dancing body from a different angle and to stay open to the dancers’ own input.

“This is my first time working with the points,” Ossola said. “So I always ask the dancers what they specialize in, and then we’ll go through technical things to help them find the center. I hope it can be a fun experience when they dance with their instinct rather than intelligence.”

Born in Switzerland, Ossola was trained at the Ecole de Danse de Geneve, where Jiri Kylian discovered and invited him to join the Nederlands Dans Theater. From 1992 onwards, he’s danced in several of Kylian’s world premieres, in ballets of other famous choreographers and creative works of his own.

“I choose to work with them, not only because we are long-trusted friends, but because they are very good and experienced choreographers of our time,”  Yen said. 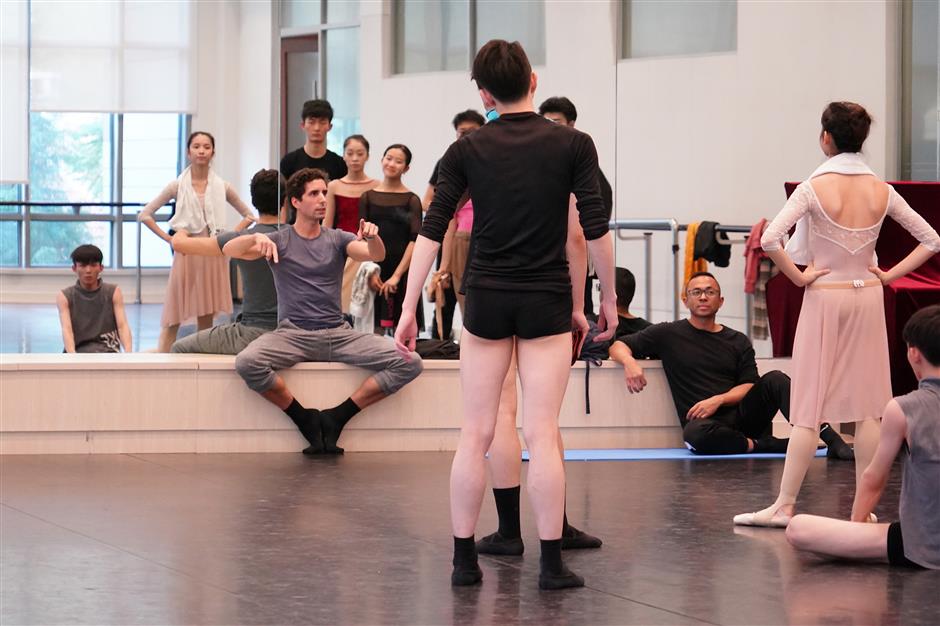 Xin Lili, head of Shanghai Ballet, said: “I’ve seen how they work with junior dancers over the past week at the Shanghai Ballet and we are happy to observe the improvements under their instructions. With junior dancers where language is no longer a problem, we look forward to a wider range of friendly cooperative relations with art groups and artists at home and abroad.”

Xin revealed the new ballet “Creations” will be reserved as part of the repertoire of the Shanghai Ballet after its Sunday debut.