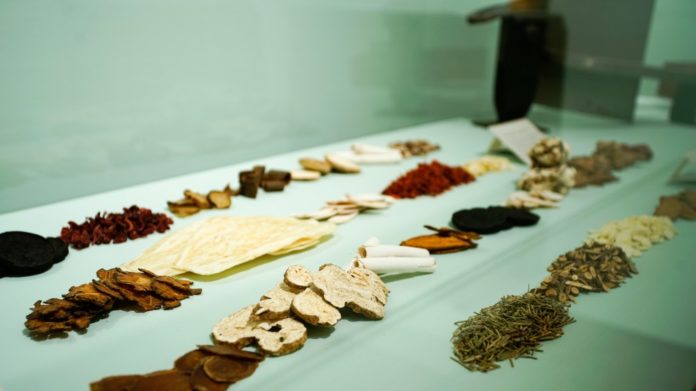 Brought to the US in the 19th century during the gold rush, traditional Chinese medicine has long been used as a complementary treatment. Even the Black Panthers adopted it, an exhibition at the Museum of Chinese in America recalls.

Apart from acupuncture, traditional Chinese medicine (TCM) is not well known in the US, and its use is generally limited to the country’s Chinese communities. But as “Chinese Medicine in America: Converging Ideas, People and Practices”, a new exhibition at New York’s Museum of Chinese in America (MoCA) shows, it has a history in the country that dates back to the 18th century.

TCM came to the New World with Chinese immigrants who started arriving in the Americas during the 19th century, and it was used as a frontier medicine during the gold rush years of the 1850s. But American traders had been growing ginseng – one of the many ingredients used in TCM – and exporting it to China a century or so earlier.

Ginseng was found growing wild in the Appalachian Mountains, and Americans, learning about the high price of the root in China, where its sale was regulated, traded it for porcelain and silk. The traders did not use ginseng for its curative properties themselves – although the Native Americans did – and were only interested in its market value.

Today, varieties of ginseng can be found in many Korean-run delicatessens in the US, although its properties are not widely known outside of Asian communities.

“Ginseng has a fascinating history here in the US,” says Herb Tam, MoCA’s curator and director of exhibitions, noting that many people think the root is Korean, and “we are pointing out that it’s actually Chinese, and its properties fit into a Chinese world view.”