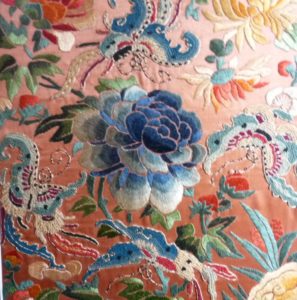 Those works were once exhibited during the 28th General Assembly of the International Astronomical Union in 2012. They didn’t receive much attention until viewers found they were not HD photos taken by space telescopes, but embroidery containing numerous different stitches.

Chinese embroidery is a traditional craft dating back two or even three millennia. During the Spring and Autumn Period (770-476 BC), a custom prevailed of embellishing clothes with embroidery. The craft grew steadily and flourished during the Tang and Song dynasties (7th to 13th centuries).

Today, artists are able to use dozens of stitches to make beautiful embroidery. With threads in various colors, a single piece of embroidery may be crafted utilizing hundreds of shades. The embroidery works with the theme of “Starry Sky & Universe” were woven using over a hundred types of threads in different thickness. It took the embroiderer more than 700 days to depict the three-dimensional nebulae with a harmonious color dynamic.

It is said NASA officials marveled at their exquisiteness, so that they offered to buy the works several times.

Actually, this is not the first time Chinese embroidery has amazed a foreign audience. Early in the Qing Dynasty, “The Portrait of Italian Empress Elena,” an embroidery created by famous Chinese embroiderer Shen Shou was presented as a gift to Italy, impressing both the Italian rulers and people. Later, Britain’s Queen Elizabeth II, former French President Georges Pompidou, the King of Cambodia Norodom Sihanouk and other foreign celebrities all received delicate Chinese embroidery gifts.

Thanks to increasing exchanges between China and other countries and the development of skills, patterns of Western oil paintings and sketches as well as the images of scientific experiments can also now be seen in the embroidery being produced in modern China.

Embroidery epitomizes Chinese people’s craftmanship and artistic sensitivity. Its development is partly based on silk production, which started quite early in ancient China. Chinese painting, which values delicacy and subtlety, also offers many fine patterns to the embroiderer, such as mountains, rivers, pavilions, Buddhas, human figures, flowers and birds. This embodies the interconnection of various aspects of Chinese culture.

More importantly, as China opens wider to the outside world, the collision and integration of Chinese and Western cultures grows rapidly. This has opened up more opportunities and prospects for the inheritance of traditional Chinese crafts, and helped China’s intangible cultural heritage maintain long-lasting vitality.