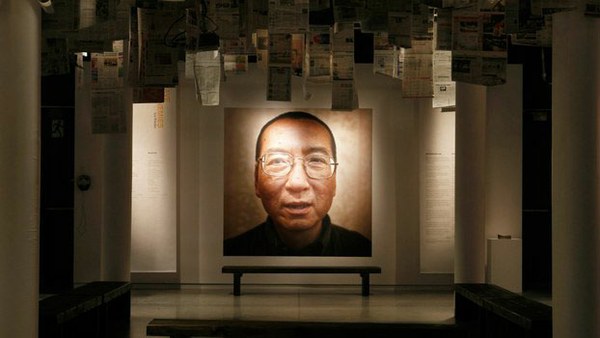 His widow Liu Xia starts a new life in Germany in a state of extreme physical weakness.

The ruling Chinese Communist Party has placed a number of dissidents and rights activists under house arrest or forced them to leave their homes ahead of the first anniversary of the death of Nobel peace laureate and political prisoner Liu Xiaobo.

Beijing-based rights activist Hu Jia said he is being forced to leave town ahead of Friday’s anniversary marking Liu’s death of late-stage liver cancer while serving a 13-year prison sentence for subversion.

“I think actually the anniversary of Liu Xiaobo’s death is one of the most politically sensitive of all,” Hu told RFA. “Of course they will be stepping up surveillance and security measures on July 13.”

“I have been under various surveillance measures for the past couple of days, and I won’t be able to go to the seaside,” he said. “I won’t be allowed to stay in Beijing, either.”

Last year, activists held ceremonies at beaches and shorelines across China to mark the burial of Liu’s ashes at sea by his widow Liu Xia, who was allowed to fly to Germany earlier this week following eight years under house arrest, amid intense pressure from the international community.

“There will definitely be people [holding secret ceremonies] by the sea,” Hu said. “But I don’t know if people will dare to go there, given the very tight surveillance by the police. Anyone doing that openly would be in trouble.”

Beijing-based veteran political activist He Depu said the state security police have been watching his home since July 2.

“They are outside right now,” He said. “I’m allowed to go out, but then they follow me,” he said. “They even follow me when I go to buy groceries, and stick to me like glue.”

“So there’s no way I will be able to take part in any mourning activities for Liu Xiaobo,” He said. “Everyone mourns his passing, but we have no way to organize; it’s a great shame.”

An official who answered the phone at the Beijing municipal government offices on Thursday declined to comment.

“There is no way I can answer this, madam, as we don’t have access to the relevant rules and regulations,” the official said.

Repeated calls to the cell phones of several former friends of Liu Xiaobo’s, as well as fellow rights activities, rang unanswered on Thursday.

However, Sichuan-based rights activist Wei Xiaobing, who is currently working in Guangzhou, said he had received a phone call from the authorities in recent days, asking him to leave the city over the anniversary.

“They said very clearly that they wanted me to leave Guangdong province,” Wei told RFA. “The main reason was the seashore memorials last year; they were afraid of trouble.”

“Things are pretty tense, for them to send me back here ahead of time, and they have put pressure on my family, too,” he said.

However, the majority of ordinary Chinese are still unaware of Liu Xiaobo, or of the significance of the anniversary, according to Perry Link, Emeritus Professor of East Asian Studies at Princeton University.

Speaking in Chinese, Link told RFA’s Mandarin Service that Liu hadn’t been very well known in his own country.

“If there was a free press in China, then Liu Xiaobo would be much better known,” Link said. “He would also have become a leading public intellectual, not because of his genial personality, but because of the keenness and depth of his thinking.”

But his former friend and political commentator Liu Junning said the international media hadn’t paid much attention to Liu’s actual ideas, either.

“The international community didn’t really pay much attention to what was going on in China,” Liu Junning said. “Some American journalists were interested, but mostly in the news aspects of the story.”

“I didn’t get the impression that these reporters were very interested in what Liu Xiaobo had to say, or his potential impact on China’s future,” he said.

Meanwhile, Liu Xia’s mood has improved since her arrival in Germany on Tuesday, but she is physically still very weak, sources told RFA.

Germany-based exiled dissident Liao Yiwu said she had undergone medical and psychiatric health checks on arrival, and was found to be suffering from no major diseases, other than extreme weakness.

“She had been planning to eat with us and so on, but when she stood up and took a few paces, she became very dizzy, and wanted to lie down,” Liao said.

“She said she couldn’t speak to the media because she didn’t feel up to it,” he said. “Her head is all over the place right now.”

However, sources said Liu Xia, who looks set to be awarded permanent residency in Germany, will likely attend a memorial service for Liu Xiaobo at the Gothsemanekirche in Berlin on Friday.

Reported by Wong Lok-to for RFA’s Cantonese Service, and by Tang Qiwei for the Mandarin Service. Translated and edited by Luisetta Mudie.