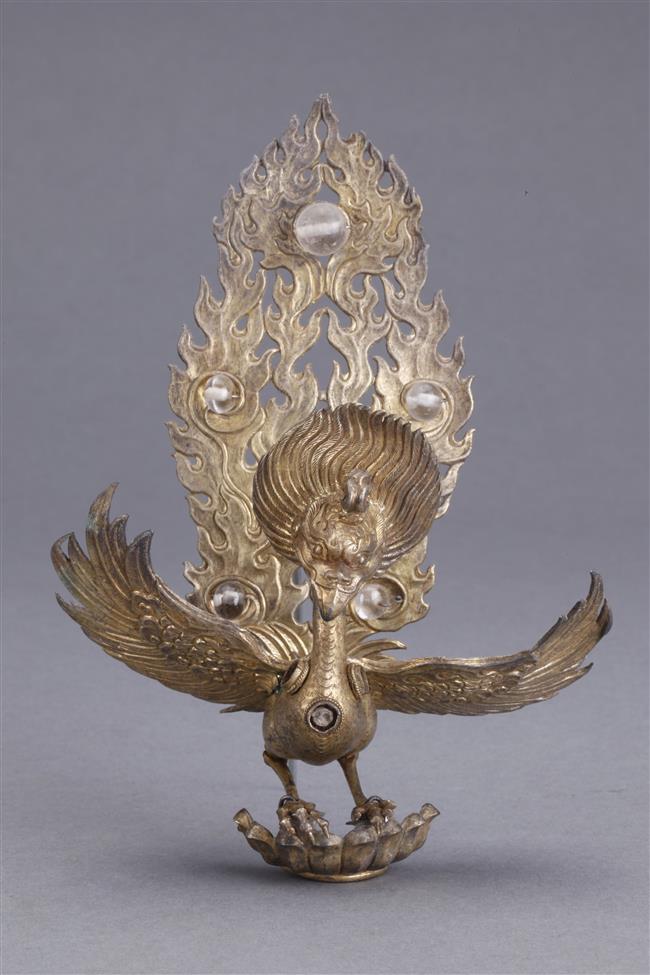 An exhibition showcasing the history, culture and handiwork of the Bai minority group is underway at Wulin Pavilion of Zhejiang Museum through July 28.

The Bai is one of China’s 55 minority groups. Although the group’s population today numbers only about 1.9 million, their customs such as sculpting and dyeing still attract attention.

The Bai people are believed to be the descendants of the ancient Erbin (洱滨) tribe, a group dating to the Neolithic Period. The Bai established two kingdoms in present-day Dali Autonomous Prefecture in Yunnan Province: the Nanzhao regime in the Tang Dynasty (AD 618-907), and the Dali Kingdom in the Song Dynasty (960-1279).

Erhai Lake with the backdrop of Cangshan Mountain

Both were closely connected with the central court of the Han. The Dali Kingdom was conquered by the Mongols in the Yuan Dynasty (1271-1368) and thereafter became a prefecture of Yunnan Province.

A large number of Han people moved to the border area during the Han Dynasty (206 BC-AD 220), and brought advanced production techniques and tools. The Dali Kingdom became a cultural melting pot with its inclusive environment and many cultural exchanges.

During modern times, they formed communities in areas which include Guizhou, Hunan, Yunnan, Sichuan and Chongqing. Nowadays, the majority of Bai still live in Dali.

The Bai people have developed their own traditions and culture through the centuries. Many of their artifacts are now on view, including examples of their ornate costumes, paintings, sculptures, as well as their traditional musical instruments.

Metal sculptures are a major feature of the group’s culture. A number of bronze vessels dating back thousands of years have been excavated from Dali. Bronze coffins, weapons, scepters and other objects reflected their social development.

The exhibition displays bronze pigs and cows made in that period.

Yunnan has been dubbed “metal kingdom” throughout dynasties because of its ample resources of silver and copper.

During the Tang Dynasty, silver sculpting came into being in Heqing County. During the Yuan, Ming (1368-1644) and Qing (1644-1911) dynasties, cultural exchanges between the Bai and other groups added to the craftsmanship.

In ancient times, local silversmiths sold handmade silver accessories by traveling across provinces, which in return spread fame of their craft. Today, Heqing County boasts more than 15,000 artisans producing around 10 million silver objects every year. The craft was listed as national protected cultural heritage years ago.

In Bai tradition, silver accessories have long been considered symbols of womanhood.

Even today, women wear silver jewelry at their wedding. Necklaces, bracelets, hairpins and earrings are four must-have accessories on this big day. The highlight of the exhibition is a silver bird gilded with gold and embedded with pearls.

It was unearthed from the three pagodas at the Chongsheng Temple in Dali, and made famous in “National Treasure,” a cultural exploration program screened on China Central Television.

The silver bird combines the best of Yunnan’s historical, artistic and ornamental values, and typified the top-flight silversmith’s skills.

The three pagodas at Chongsheng Temple in Dali is one of the best-known architectures of the Bai people. The 16-story tower, 60 meters high, was built during the Tang Dynasty. It resembles the Dayan Pagoda in Xi’an in Shaanxi Province. These pagodas, along with the exhibited Avalokitesvara figurines, testified to the popularity of Buddhism among the Bai.

In the Yuan and Ming dynasties, Buddhism, Taoism and Confucianism spread to Dali and influenced the Bai’s beliefs, which in turn formed an inclusive and diverse religion environment. Today, the Bai worship Buddha and other gods at the same time.

In addition to architecture and sculpture, Buddhism also influenced Bai folklore and music.

The March Fair that falls on the 15th day of the third month in their lunar calendar is a grand festival. It was originally a Buddhist activity to gather and pay homage, and gradually developed into a fair for sporting contests, food, handiwork and theatrical performances.

Like other minority groups, the Bai people have their own distinctive costumes. The exhibition showcases sets of traditional costumes featuring the Bai style.

Women wear a headscarf shaped liked a crescent and ornamented with a fringe. It symbolizes the snowcapped Cangshan Mountain and Erhai Lake. 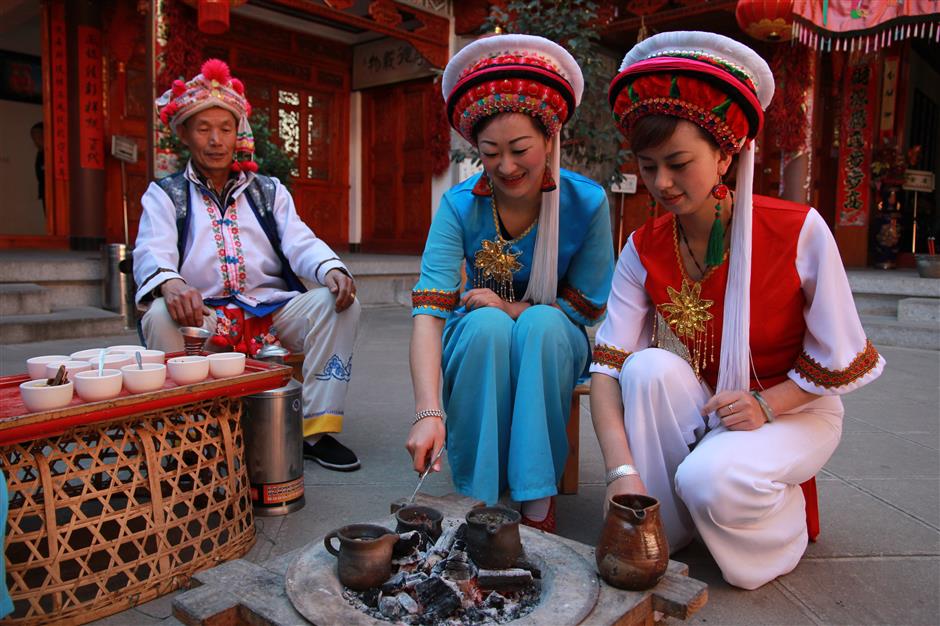 During the exhibition, organizers are hosting activities themed on the Bai’s cultural heritage, including sandao cha (three-course tea) and textile dyeing.

Sandao cha is often served by Bai people to welcome guests, usually in festivals and ceremonies.

The host pours tea into each cup three times. The first course is for the guest to smell the aromatic tea, the second one for tasting by adding black sugar and minced walnuts, while the third pour is for drinking by blending sliced ginger, pepper and spice to create multiple flavors.

Zhoucheng Village in Dali is the home to the ancient dyeing craft, which could date to the Tang Dynasty. The dyed cloth was made into costumes.