An exhibition of the works by calligrapher and seal carver Hu Tiesheng (1911-97) is underway in Minhang District.

Hu was a solider of the Chinese Eighth Route Army under the leadership of the Communist Party of China in the fight against Japanese invasion.

He created a large number of works and his own style of calligraphy.

The exhibition displays Hu’s works in 1981 on the poetry of Lu Xun with zhuanshu (seal script) and weishu (Wei script) to mark the 100th anniversary of Lu’s birth, and a 16.4-meter-long zhuanshu roll of Chairman Mao’s poems.

Hu created 78 seals recording the life of Premier Zhou Enlai and long calligraphy rolls of the poems of Zhou, Marshal Zhu De, Dong Biwu and Shanghai’s first mayor Chen Yi, all of which are on display.

The exhibition also features 128 seals by Hu from the Nanchang Uprising and the Autumn Harvest Uprising to the Long March  and the War of Resistance Against Japanese Aggression.

Hu’s urn was interred at Fushouyuan Cemetery in Qingpu District. Some of his works are collected and displayed at the memorial park of the cemetery, which co-hosts the exhibition. 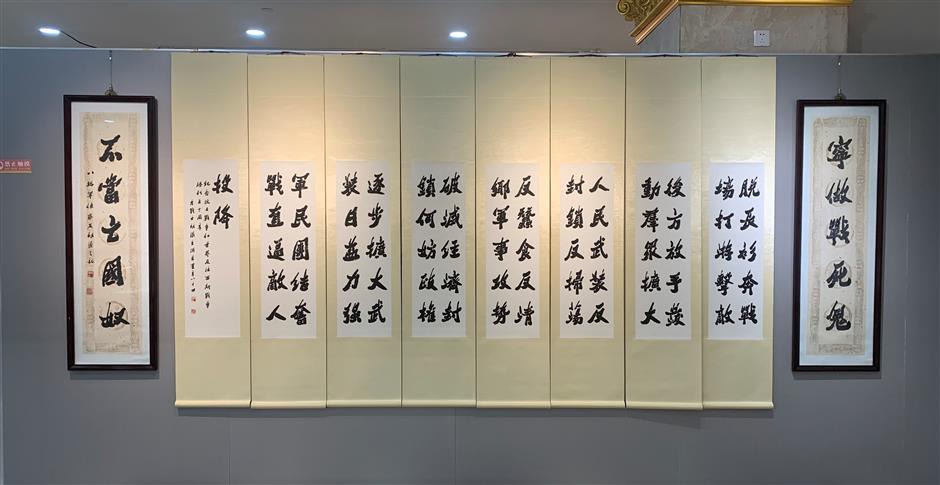