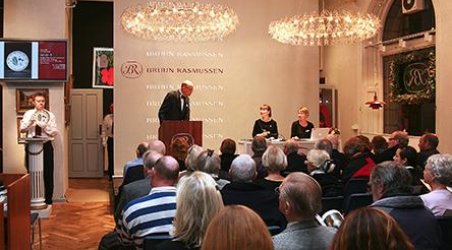 Art and antiques from Russia have made quite a splash at Bruun Rasmussen’s auctions in recent years, and it became one of the leading auction houses in Scandinavia in this area. At this summer’s traditional auction in Copenhagen and a subsequent online auction is submitted a large selection of Russian art and antiques primarily from before the revolution in 1917. The auction is scheduled to be held on June 8, 2018 at 14.00 in Copenhagen.

“For the upcoming Russian art auction, we have published a separate catalogue in Russian and English to accommodate our large client base. There are 145 lots at the auction worth a total of DKK 10 million (EUR 1,4 million)“ says Martin Hans Borg, Russian Art Expert at Bruun Rasmussen Auctioneers in Copenhagen.This time there will be both a preview in Copenhagen and London, where we are looking forward to exhibit some of the highlights at Shapero Modern during Russian Art Week in London. Among the highlights are three Fabergé Easter egg pendants belonging to Grand Duchess Anastasia Mikhailovna of Russia (1860-1922), a charming painting depicting country life by Feodor Vasilievich Sychkov from 1934 and a bronze sculpture by Ivan Fedorovich Kovshenkov, which depicts a “Black Sea Cossack from Sevastopol 1854 and 1855”. There are also a number of fine works by workmaster Feodor Rückert from Fabergé in the form of a kovsh, a small box and several bowls in gilded silver with cloisonné enamel.

It is no coincidence that so many costly items from Russia have found their way to Denmark. Over time, strong ties were established between Denmark and Russia. The first formal connection took place between King Hans of Denmark and Ivan III of Russia in 1493. During the Romanov dynasty, the connection grew even closer due to the Danish-Russian Alliance during the Great Northern War and increased trade during Denmark’s florissant period of the late 1700s.

The connection between the two countries culminated in 1866 when Christian IX’s daughter, Dagmar, was married to the later Tsar Alexander III and was named Tsaritsa Marie Feodorovna. She helped introduce Danish businesses in Russia, including the Great Nordic Telegraph Company and East Asiatic Company. During the Revolution in 1917, Tsaritsa Marie Feodorovna fled to Denmark, where she, together with her daughter, Grand Duchess Olga Alexandrovna of Russia, settled in Hvidøre Castle, north of Copenhagen.

Bruun Rasmussen has held Russian auctions since 2006 and is very successful within the category. “Last year we achieved a world record on Russian icons and have generally been favoured by the historic Danish-Russian relations throughout the centuries – partly through the Russian Tsars, who were very generous during their travels in Denmark and the many Danes who have been posted in Russia during the 19th and 20th century” tells Martin Hans Borg. “In addition, we have contact with the branches of the Danish royal house, which continuously consigns Russian art treasures to our auctions. It always provides an extraordinary touch when there are royal and imperial provenances on the lots that are up for auction. This is also the case at the summer’s Russian auction”.

Bruun Rasmussen has buyers from all over the world at our Russian art auctions, but the majority are residents living in Russia, England and the United States. It is easy to buy at auction with us. At the traditional auctions in Copenhagen you can either show up in the saleroom, bid by phone, make a commission offer or use our live bidding via bruun-rasmussen.dk.

For more than 60 years, Bruun Rasmussen Auctioneers of Fine Art have been internationally recognized brokers of objets d’art, a position we have achieved by acting as competent collaborative partners for both buyer and seller.

A versatile selection, a certain knowledge of styles and the historical characteristics of the individual items along with comprehensive knowledge of legal and statutory requirements has resulted in our house attracting an ever-widening clientele. 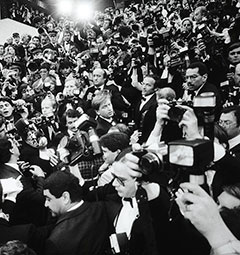 Bruun Rasmussen annually holds four traditional live auctions at Bredgade and more than 50 online auctions with about 100,000 lots. In other words, auctions are held almost every day of the year. Together with other valuation tasks the auction house’s valuers make at least a quarter of a million valuations every year.