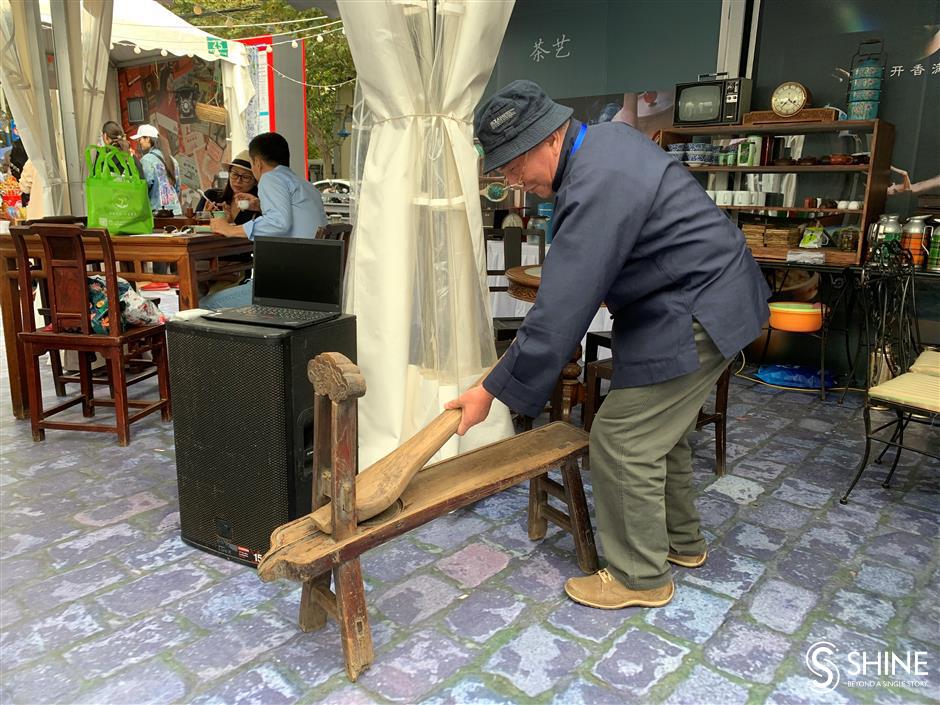 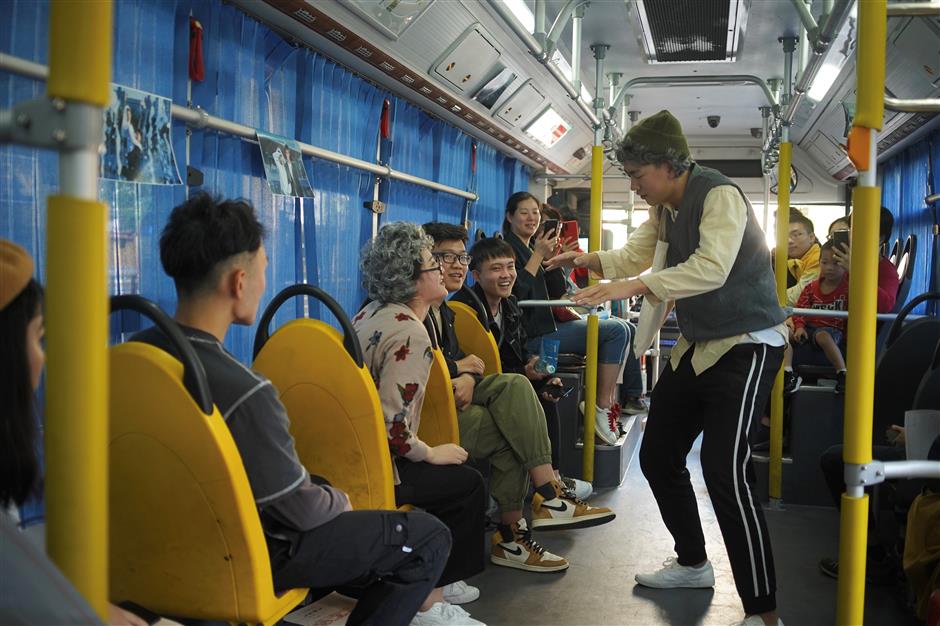 A bus functions as a moving theater with a drama featuring the life of a woman.

A bus stopped at the gate of the Shanghai Theater Academy on Yan’an Rd W. every afternoon last week, but it was no ordinary people mover and those on board were no ordinary passengers.

The vehicle was a moving theater, where the immersive play entitled “Bus of My Life” was staged.

The “land” project was founded jointly by the arts festival and the Shanghai Theater Academy in 2013 to give a platform to creative young talent.

“Bus of My Life” tells the story of a woman — from childhood to old age. She meets her future husband on the bus, and bus stops chronicle her life.

“Every bus stop implies an important milestone in her life,” said Li Yong, 30, director of the play. “One of the stops is the Shanghai International Dance Center, where the hero and heroine get off the bus and get married.”

Only 22 “passengers” could board the bus on any round, becoming audience and sometimes participants. Two of the audience were invited to be bridegroom and bridesmaid at the wedding stop.

“We young people often traveled on buses during our childhood, but that has been mostly replaced by the Metro now,” said the play’s author Zhang Yanzhi, 26. “Buses have become part of our childhood memories.” 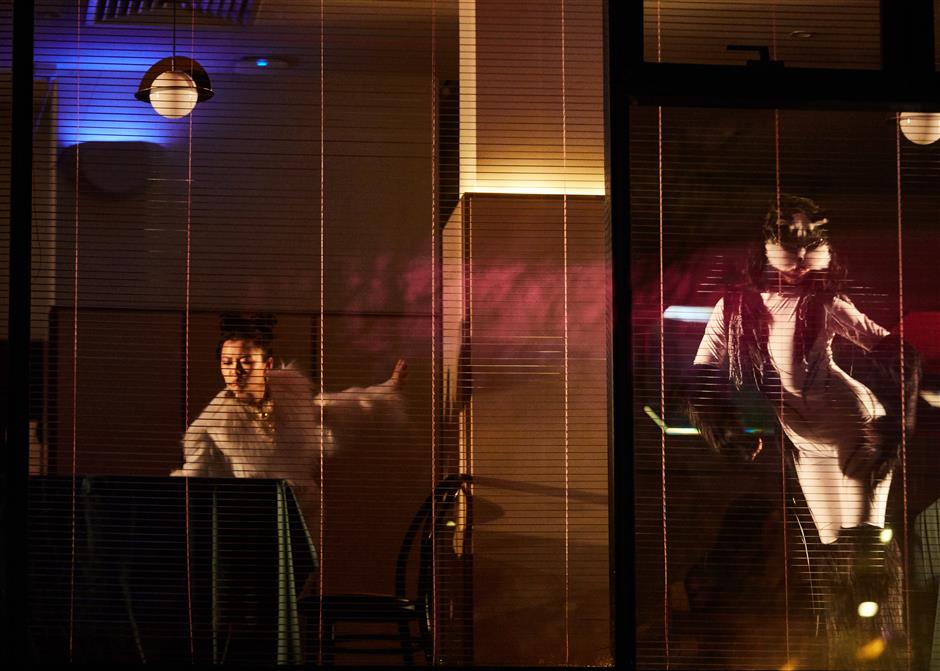 Staged in a school cafe, a drama about three disillusioned cats is a metaphor on human life.

Breaking away from the traditional theater settings, many other shows created by young artists were performed in every corner of the Shanghai Theater Academy. They included a classroom, a large lawn, a basketball court and a cafe.

Another of Zhang’s plays, entitled “Three Cats,” was performed in a school cafe that has floor-to-ceiling windows. The actors performed on the second floor of the room while the audience on the ground floor watched through the glass and listened to the dialogue via Bluetooth headsets.

This piece of experimental theater depicts three cats who meet unexpectedly near a cafe trash can. Each has its own difficulties. One suffers from loneliness; another from betrayal. The felines all seem disappointed in the human race.

“I think the drama is ironic,” said a senior student of the Shanghai Theater Academy after watching the show. “I see the shadow of human beings through the three cats.”

The contemporary dance “Clouded” explores the sense of subconscious alienation that arises when people are overwhelmed by rapid technological changes.

Another production, based on the Chinese classic text “Shan Hai Jing,” or “Classic of Mountains and Seas,” is a new media performance called “Avatar Mythology.” It distills contemporary and philosophical contemplations with digital media technology.

The allegorical drama “Catch Shadows” combines Chinese shadow puppetry and contemporary theater in “a story within a story within another story.” The plot unfolds on an ancient island called the Shadow Kingdom, where local people catch shadows and present them to the king in order to save their own lives. A shadow puppetry artist comes to the island and discovers the secret of the shadows and the king.

“Through such a comprehensive platform, we can see both classic and experimental works,” director Li said of the series. “All of the selected works are high quality.”

Li himself first participated in the program as an actor three years ago.

“Being an actor is easier than working as a director because a director needs to consider more things,” said Li.

“However, the shift has been part of my progress.” 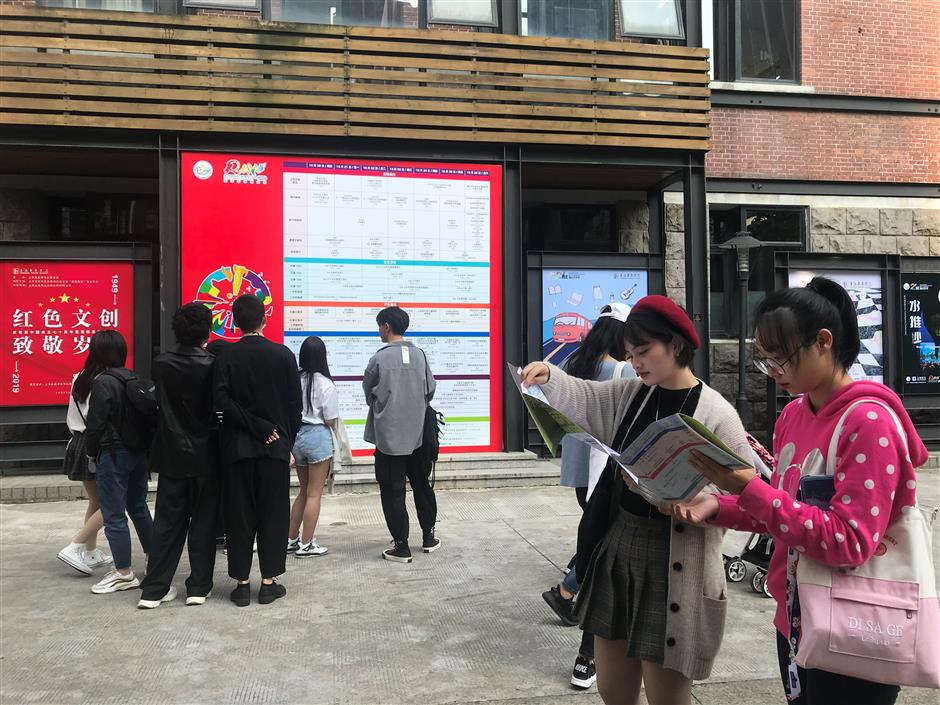 Young lovers of performing arts map out the performances they want to see.

On a visit to the Shanghai Theater Academy on October 25, I saw groups of young people holding maps and animated discussions. They looked like treasure hunters about to embark on a quest to find hidden gems on campus, which is what they were essentially doing.

“My two roommates and I came here to watch Zhai Lishuotian’s performance,” said Popo Liu, who is a postgraduate at the East China University of Science and Technology.

Zhai, an alumnus of the musical department at the Shanghai Theater Academy, is a musical actor who shot to fame after participating in the singing competition reality show “Super Vocal.”

“I took part in the Rising Artists’ Works when I was a student, so I know how hard-working the participants are,” said Zhai, after giving an outdoor performance on the lawn. “I think we all must stay true to our mission.”

Liu and her roommates spent 20 yuan (US$2.84) each to buy a ticket, a price they considered very cheap.

“We didn’t expect there to be so many performances,” said Liu. “As engineering students who do experiments in the lab all day, this feels like a vacation to us. The environment here is so good.”

Tin toys, homespun articles, vintage radio and television sets, fruit candies no longer found in the markets and former teahouses now closed — all are revived in a fair called Shanghai Old Street, put on by Rising Artists’ Works near another gate at the Shanghai Theater Academy on Huashan Road. 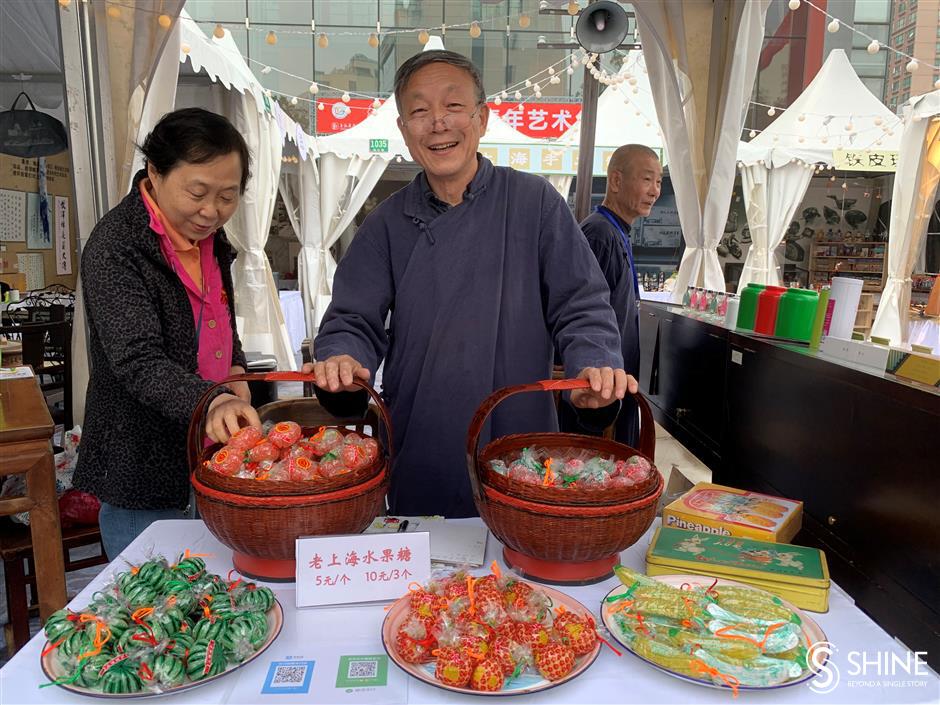 Fruit candies no longer found in the markets are revived at the fair. 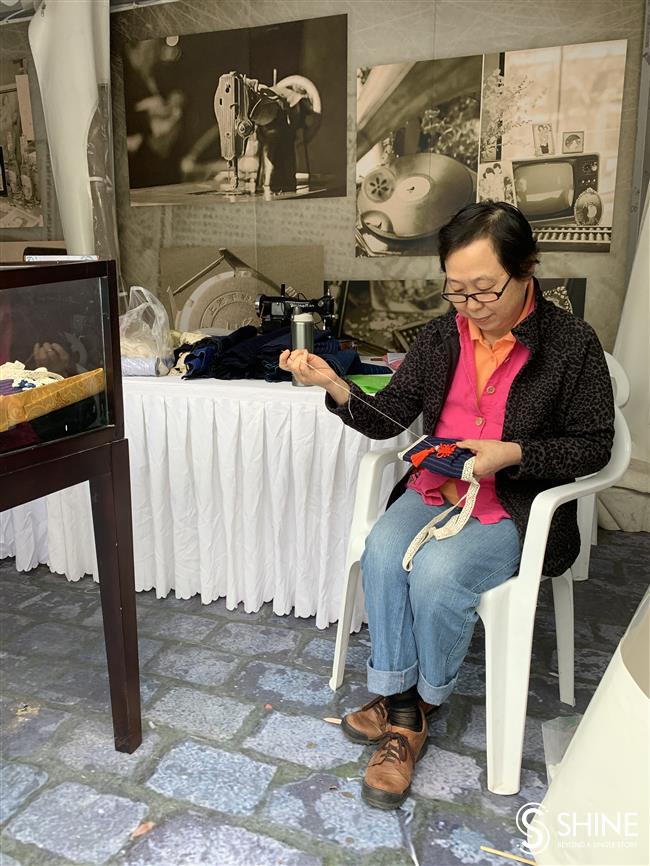 “I was a regular patron of the Old Shanghai Teahouse on Fangbang Road M.,” said 61-year-old Yu Xiaofang, while making a homespun pouch. “Although the teahouse is closed, we regular customers often get together.”

According to Yu, the original owner of the teahouse, Zhang Jianming, has founded a volunteer team to promote the history and culture of Shanghai. Yu participates in the fair, teaching young people the simplicity of homespun arts like how to paint on enamel mugs and folding fans.

“I was an engineering student, but I enjoyed doing needlework since I was a young girl,” said Yu. “Volunteer work enriches my retirement.”

An elderly man named Liu Zhengang is also a member of the volunteer team. Last week, he worked at the fair from 12:30pm-9pm every day. Wearing traditional Chinese clothing, he showed me antiques that I had never seen before. For example, a portable wooden piece that looks like a bench was used to squeeze fresh fruit juice.

“We are a group of nostalgic people,” said Liu Zhengang, who is in his 70s.