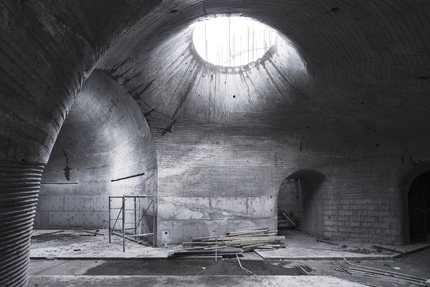 The Ullens Center for Contemporary Art in Beijing has announced that it will open a new museum along the coast of the Bohai Sea in Hebei province’s Beidaihe District, a popular resort town located on the outskirts of Qinhuangdao in northeast China, later this year. Called UCCA Dune, the roughly ten-thousand-square-foot institution was designed by Li Hu of the firm Open Architecture and built by the Aranya Gold Coast Community, which has enlisted the UCCA to run its programming and operations.

“UCCA is excited to move beyond its flagship location in Beijing with a permanent presence in this stunning building in a gorgeous natural setting,” UCCA director Philip Tinari said in a statement. “We look forward to working with great artists to show their work in this new context, and to offering our members and visitors the chance for an unforgettable art experience by the sea.”

Tinari told artforum.com that the venue is located in a cultural and culinary destination that is to Beijing what the Hamptons are to New York. Only around three and a half hours from Beijing, or ninety minutes by train, the museum will boast seven indoor galleries and three outdoor galleries, a building that is set among the shoreline’s sand dunes, a café, and a reading room.

The satellite will soon also feature a gallery that is partially submerged in the ocean and that can only be reached by foot during low tide. A long causeway that will provide visitors with access to the exhibition space will be built next year.

UCCA Dune will stage around two exhibitions per year and, according to Tinari, will be an exceptional space for one-artist shows. “After Nature,” a group exhibition that explores the shifting relationship between humans and nature against the backdrop of China’s last three decades of development will inaugurate the museum next month.

The UCCA, situated in the heart of the 798 Art District, was founded by Guy and Myriam Ullens in 2007. Following the Ullens’s announcement that they were seeking new owners for the celebrated contemporary arts space, they sold the UCCA to a group of Chinese investors last year. The sale launched a major restructuring of the institution, which is now run by the UCCA group, comprising the UCCA Foundation, a nonprofit organization that organizes its exhibitions, research, and public programming, and UCCA Enterprises, a number of art-related retail and educational ventures that generate revenue for the museum.