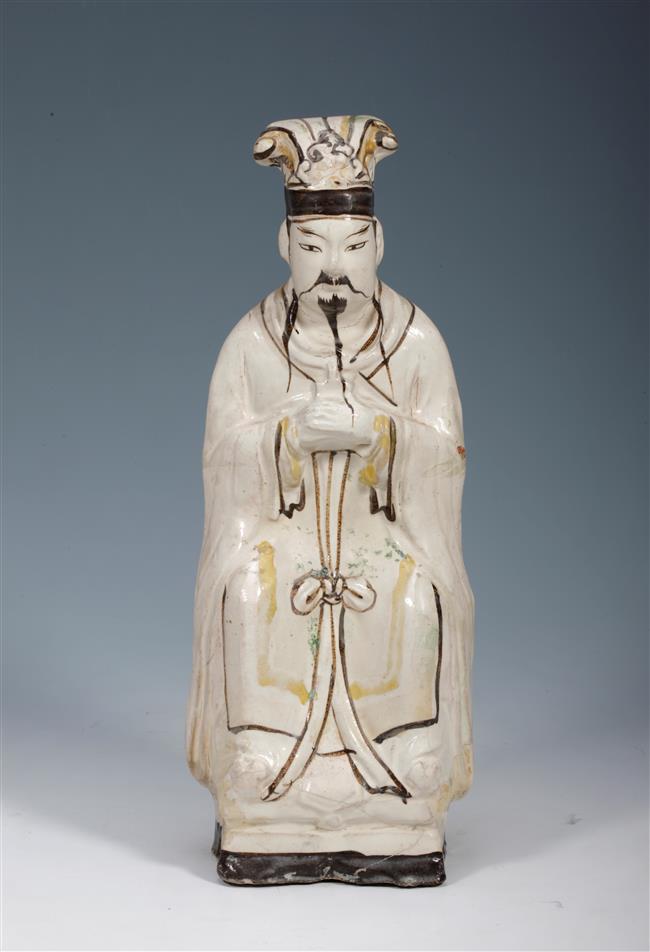 Cizhou kiln, one of the “eight great kilns of the Song Dynasty (960-1279),” is famous for its black-and-white products and vigorous and imaginative motifs. Though Cizhou ware is, somehow, less high-status than other types such as Jun ware, Longquan celadon and Jingdezhen porcelain, the folk art — free from aristocratic taste — was less affected by political changes and thus gained development over centuries.

The sites of Cizhou kiln are distributed over a very large area, including Henan, Hebei and Shanxi provinces and the Inner Mongolia Autonomous Region. Thriving in the Northern Song (960-1127) and Jin (1115-1234) dynasties, Cizhou ware represents the northern school of Chinese porcelain. It was on decline in the Yuan Dynasty (1271-1368) but still existed till the Qing Dynasty (1644-1911).

“There is no definitive answer about when Cizhou kiln originated. Some experts believe it can be traced back to the late Five Dynasties (AD 907-960) while others think the early Northern Song Dynasty. I tend to support the latter one. Generally, the decline of Cizhou ware resulted from the rise of Jingdezhen ware,” says Zhan Xiao, a researcher at Shanghai Guanfu Museum, founded by veteran collector Ma Weidu.

The name “Cizhou kiln,” however, wasn’t mentioned in academia until the early 20th century by Robert Lockhart Hobson, who was keeper of the Department of Ceramics and Ethnography at the British Museum.

In 1918, northern China suffered a major drought. In Julu, a small town in Hebei Province, the land was parched and water was scarce. To solve the problem, the villagers dug wells. When the hole reached 3 meters deep, the villagers stumbled across a heap of white glazed porcelain with black patterns.

The news got about and attracted many curio dealers and collectors to visit Julu. Some foreign scholars also came to the small town for research. Referring to ancient documents, the scholars identified the porcelain that was fired in the Ci kiln in Cizhou, a county in today’s Handan of Hebei.

“White background and black motifs” is the most striking characteristic of Cizhou ware. The contrast between the two colors created a strong visual effect. In fact, the original color of the clay body is not white but yellowish. Meanwhile, the texture of the stoneware is sturdy but rough.

To overcome the inferiority of the raw material, the potters applied milky white slip over the body of the ware, decorated it with iron-pigmented black or brown slip by using a Chinese brush, and finally covered it with a transparent glaze. In later periods, red, green, yellow, turquoise and black enamels were applied.

“The white slip somehow is just like the liquid foundation that girls use daily to cover flaws. The white background like white paper allows artists to paint and write,” says Zhan.

Many literati engaged in the design of Cizhou ware, combining Chinese painting, calligraphy and literature with Cizhou ware. 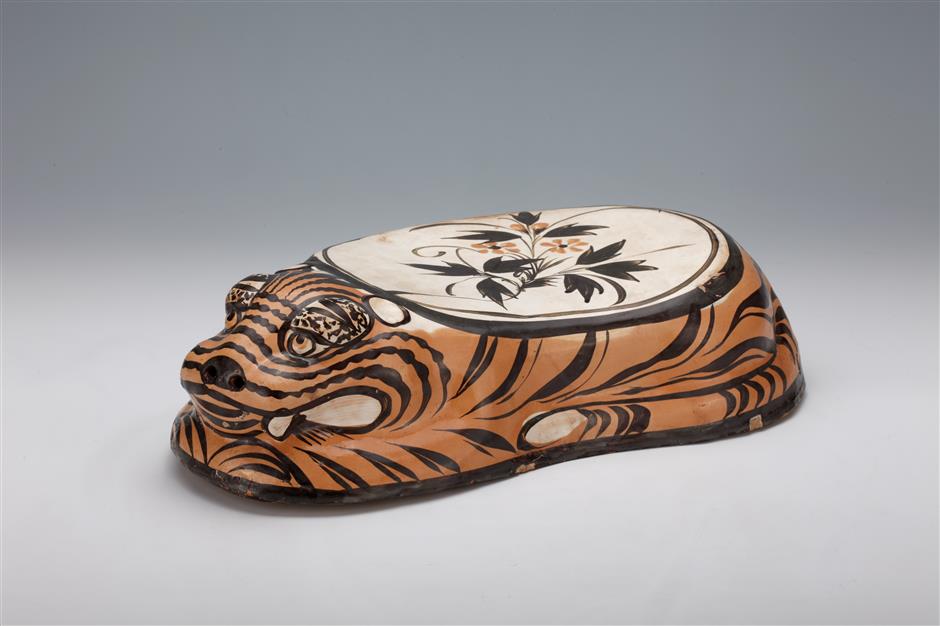 A tiger-shaped ceramic pillow from the Jin Dynasty

Lively, vigorous and bold, the motifs were painted in calligraphic strokes. The range of motifs is wide, including birds, fish and tigers, flowers such as peony, lotus and mallow which were arranged in scrolling patterns and human figures like children at play and characters in legends. There are often painted inscriptions that are related to short poems, wishing auspiciousness, and names of the family workshop.

Cizhou ware also features variable decorative techniques. Apart from incisions, sgraffito, a method of scrapping away the white background to reveal the gray body, was used to create a pictorial effect. The technique of combing was also utilized to make striations.

“Though most of Cizhou ware was manufactured as utilitarian, only middle to upper classes of ancient Chinese society could afford them,” says Zhan.

The most special type of the ware functioned as ceramic pillows or headrests. First manufactured in the Sui Dynasty (AD 581-618), the headrests gained immense popularity in the Song Dynasty. The vast majority of surviving ceramic pillows were Cizhou ware. The pillows were typically used in summer as the glazed surface is cool.

The shapes of ceramic pillows were in three categories — geometric shapes, like round, rectangle, hexagon and octagon; human figures, including reclining women and children; and animals such as lions and tigers which was an icon of the ceramic pillows made in Shanxi Province. An array of imaginative shapes existed at the same time, for example, bean-shaped, book-shaped and fan-shaped.

The large concave space on the top of a headrest was created to portray landscapes or tell stories. Around 30 to 45 centimeters long and 17 centimeters wide, the pillows made in Cizhou kiln in the Yuan Dynasty became larger than before. The potters of the Yuan Dynasty often painted scenes from Zaju, a genre of Chinese drama, on the panels of headrests. 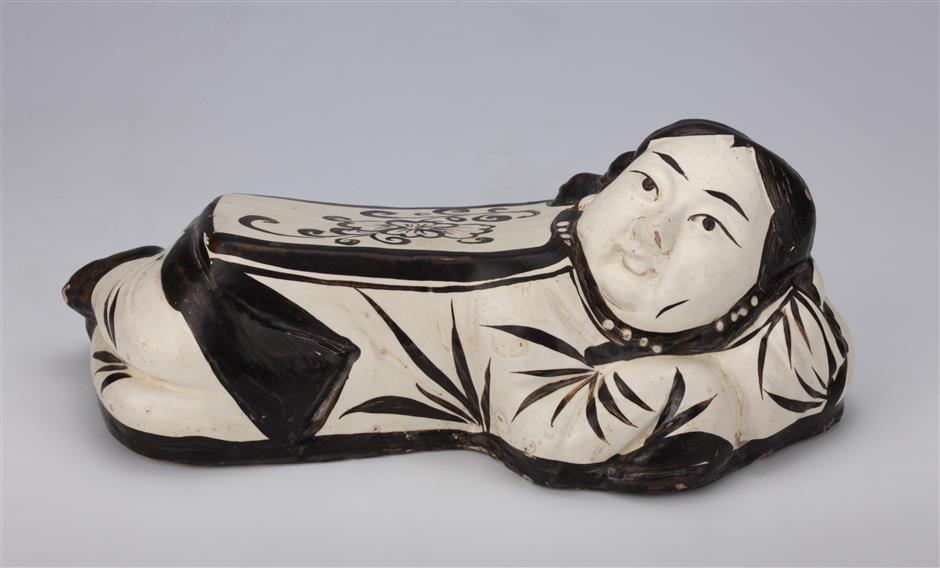 A Jin Dynasty headrest in the shape of a reclining woman 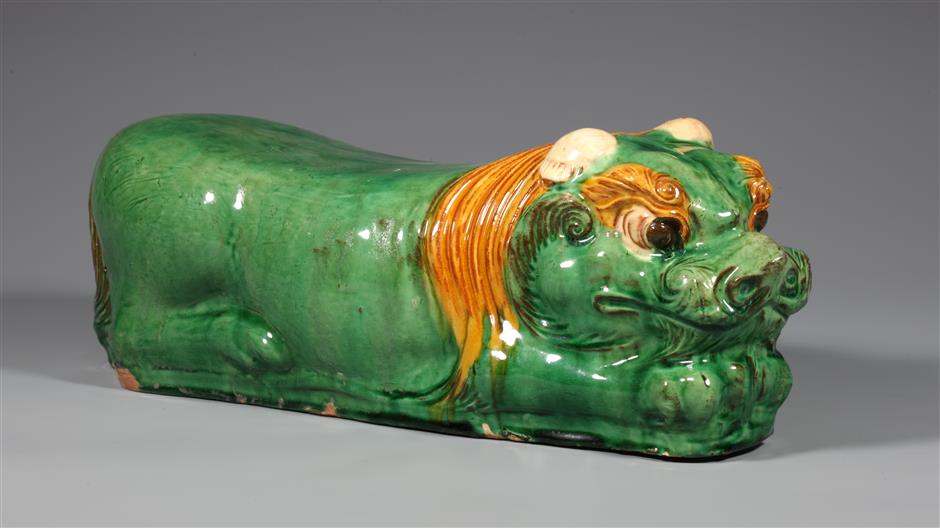 Hard, cold and heavy, a ceramic headrest is certainly dissimilar to the feather pillow we use today. It seems that the ceramic ones are not comfortable to lie upon but Zhan says: “I once tried lying on a ceramic pillow. To be honest, it was quite comfortable. The average height of the pillow reaches 9 centimeters.”

Beyond a supportive object used for sleeping, the ceramic pillows were thought to have health benefits. Li Shizhen, a renowned medical scholar in the Ming Dynasty (1368-1644), stated in his book “Compendium of Materia Medica” that the ceramic pillows would ease sleepers’ anxiety and brighten their eyes.

Another advantage of ceramic headrests is that they helped maintain the long and extremely complex hairstyle of ancient Chinese who had faith that hair was given by parents and thus couldn’t be cut throughout life.

“Ceramic pillows were also believed to have power to exorcise evil spirits. Many headrests regarded as burial objects were excavated from the tombs of ancient people,” Zhan adds.

Located on the 37th floor of the Shanghai Tower in the Pudong New area, the Shanghai Guanfu Museum has four permanent exhibitions displaying around 500 artifacts, including Chinese artworks exported overseas during the Qing Dynasty, Buddhist statues, gold ornaments, textiles and porcelain. Twenty-two pieces of Cizhou ware are exhibited in the ceramic gallery. 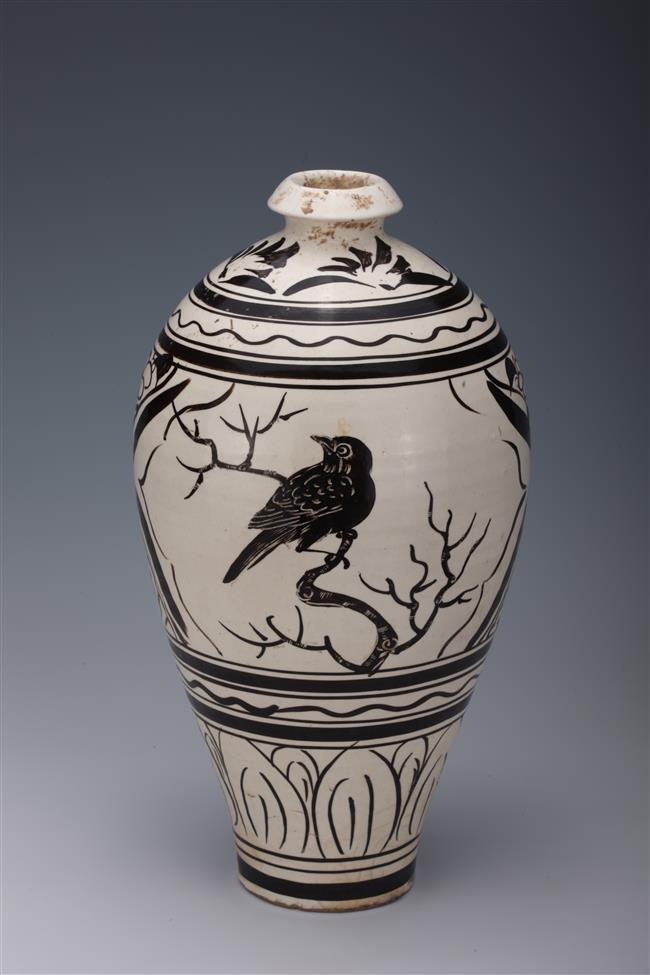 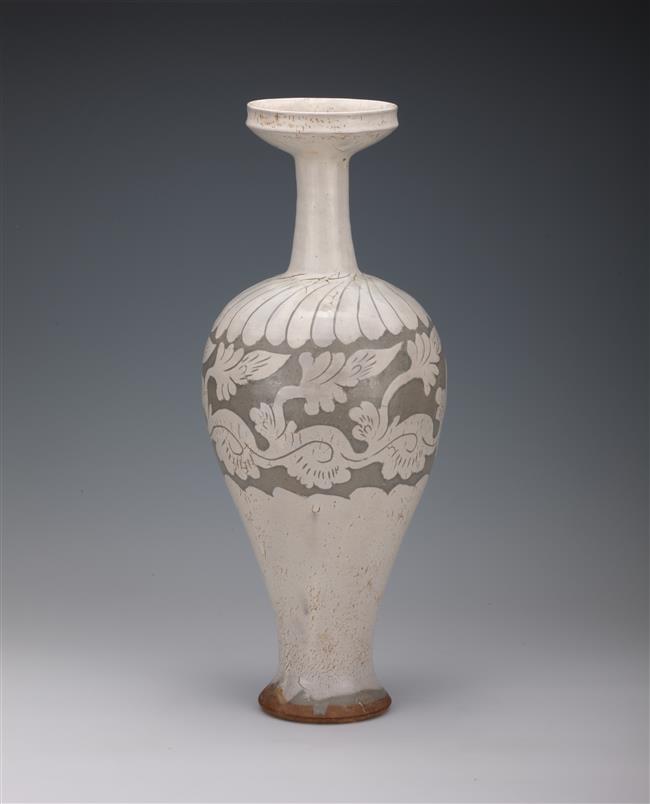 Liao Dynasty
The bottom part of the vase reveals the original color of the clay — yellowish.