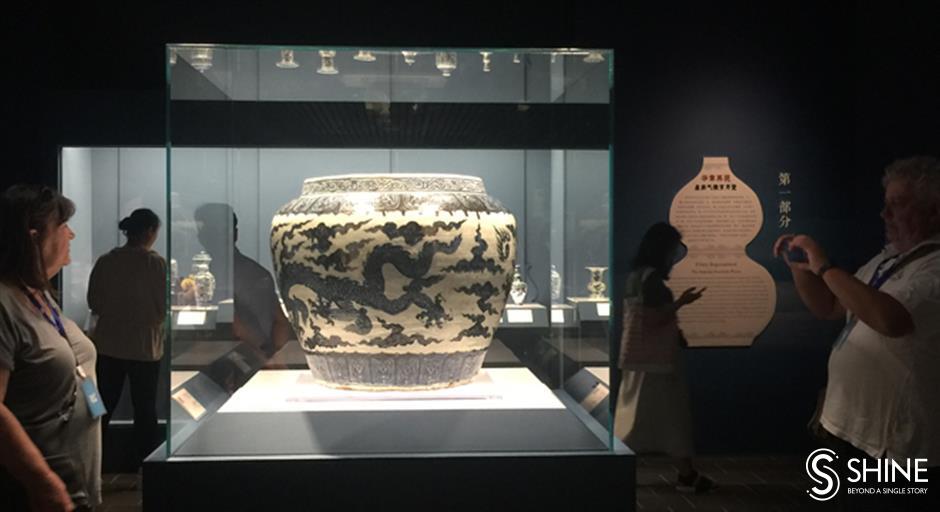 An exhibition featuring blue-and-white porcelain of the Zhengtong, Jingtai and Tianshun reigns (1436-1464) in the mid-Ming Dynasty is under way at the Shanghai Museum and will run through September 1.

Combining the museum’s collections, newly discovered imperial porcelains from Jingdezhen in Jiangxi Province, and items on loan from other museums and institutes, the three-month show aims to shed some light on imperial porcelain from this period — known as the “Interregnum Period” or “Dark Period” in the history of Chinese porcelain.

Over 30 years in the “Dark Period,” the dynasty was torn by political turmoil as two brothers battled for succession to the throne. Porcelain made during this period bore no emperor’s name.

The absence of historical records makes it difficult to know how much porcelain was produced during these years, which causes great confusion in the market assessment over these wares.

In 1988, an imperial kiln site was discovered at Mount Zhushan, Jingdezhen.

Together with many important porcelain shards excavated in 2014, antique experts became engaged in great debates about this period, leading to significant advancements in archaeology.

In addition to the porcelain made during the three-reign period, visitors also get to see some exemplary designs for the Ming royal families and civilian kiln products during the preceding Xuande reign (1426-1435) and the following Chenghua reign (1465-1487), when blue-and-white porcelain entered its golden era.