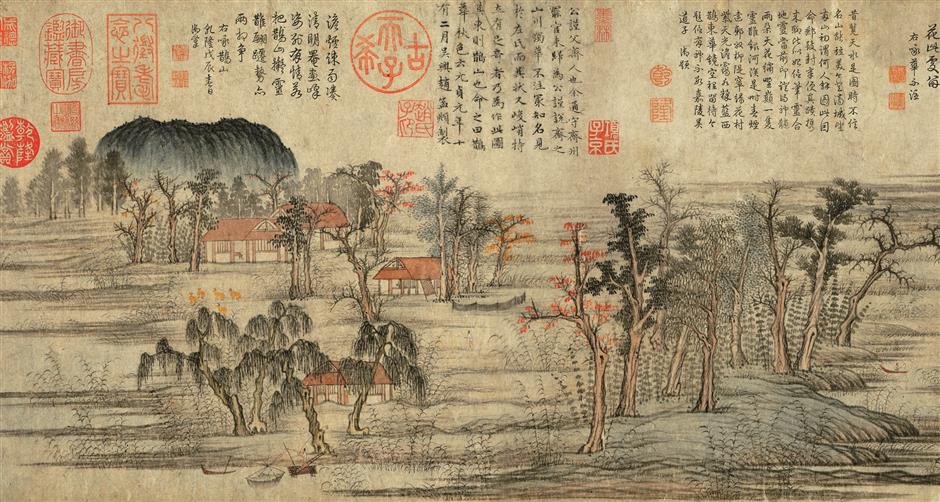 Zhao Mengfu (1254-1322) is widely regarded as one of the greatest painters and calligraphers of the Yuan Dynasty (1279-1368). As a pioneer in literati painting, he sought personal expression rather than an accurate depiction of the landscape.

Born in Huzhou in Zhejiang Province, Zhao was a descendant of an imperial family of the Song Dynasty (960-1297). Although the Song Dynasty was conquered by the Mongol Kublai Khan, who established the Yuan Dynasty, the first Yuan emperor greatly appreciated the Han scholar who served as a prominent official in the Imperial Academy.

Zhou Mi, a literati of the Northern Song Dynasty (1127-1279), was Zhao’s intimate friend. One day, they gathered to drink and chat with other friends.

One of topics they talked about was the spectacular natural landscape they had visited. Zhao highly appraised the beauty of Queshan and Huafuzhu mountains in Jinan in Shandong Province where he worked previously.

There are two versions on the Queshan Mountain origin. One is that a lot of magpies, called xique in Chinese, perched on the mountain. Another version says that Bian Que, who is the earliest known Chinese physician, once processed alchemy there and is also buried on the mountain.

Huafuzhu Mountain, also called Huashan Mountain for short, was a battlefield in the Spring and Autumn Period (770-476 BC).

During their gathering, all the people present, except Zhou, wowed at the marvelous scenery. Zhou, whose ancestral hometown was exactly in Jinan, looked upset. The former official fled to Huzhou in Zhejiang Province after the collapse of the Southern Song Dynasty and never returned to his hometown. Zhao’s words made Zhou homesick.

The next morning, Zhou visited Zhao’s house and wanted to hear more about his hometown. Instead of describing verbally, Zhao used brushes to depict the scenery of the place.

Painting while introducing, Zhao recreated the Jinan landscape from memory. The handscroll mainly portrayed the fall scenery of Queshan and Huashan mountains.

The painting is partitioned into two sections. The one on the right features the steep Huashan Mountain. On the left side is Queshan Mountain with a plain ridge. The two mountains are surrounded by marshland. Some leaves on the trees including poplars and pines are yellow, echoing the arrival of autumn.

On the left side of the painting, five goats graze in front of cottages while fishermen are busy with their farm work. The serene autumn landscape and idyllic life are vividly portrayed by Zhao. The handscroll is recognized as one of his masterpieces.

The handscroll was later collected by Emperor Qianlong (1711-99) who inscribed its name quehua qiuse (Autumn Colors on the Queshan and Huashan Mountains).

However, it is said that the handscroll was on the brink of destruction twice because of the emperor.

One year, Emperor Qianlong went to Jinan to hunt. In his spare time he climbed the gate tower to enjoy the city view. He suddenly had déjà vu and thought of Zhao’s painting.

The emperor asked his attendants to fetch the handscroll from the palace. Comparing the picture and landscape, the emperor found that Zhao made a mistake in the location of two mountains.

To help Zhou reduce his homesickness, Zhao broke the rules of realistic painting and painted those two mountains freehand on the handscroll.

However, the emperor was angry about the error as he thought the painting would give wrong geographic information and might mislead his armies.

Concerning its preciousness, Emperor Qianlong didn’t destroy it but ordered servants to banish the handscroll from the public. Shortly afterwards, Emperor Qianlong once again went to Jinan. He visited Quehua Bridge over Daming Lake. The beautiful scenery reminded him of Zhao’s painting again. Writing a poem on the handscroll, the emperor even associated the bridge with Queqiao Bridge, which was allegedly formed by a flock of magpies.

According to a household Chinese myth, the lovers Niulang and Zhinu, or cowherd and weaver girl, reunite on the bridge of magpies once a year, on the seventh day of the seventh lunar month.

Their love was not allowed so they were banished to opposite sides of the heavenly river.

A few days later, Emperor Qianlong received bad news of the empress’s death. The heartbroken emperor was full of remorse because he believed that his ominous poem featuring the sad love story led to his wife’s death. The painting then faced a second crisis.

Fortunately, Emperor Qianlong finally gave up the idea of burning the painting, and the treasurable handscroll is now in the collection of the Palace Museum in Taipei.