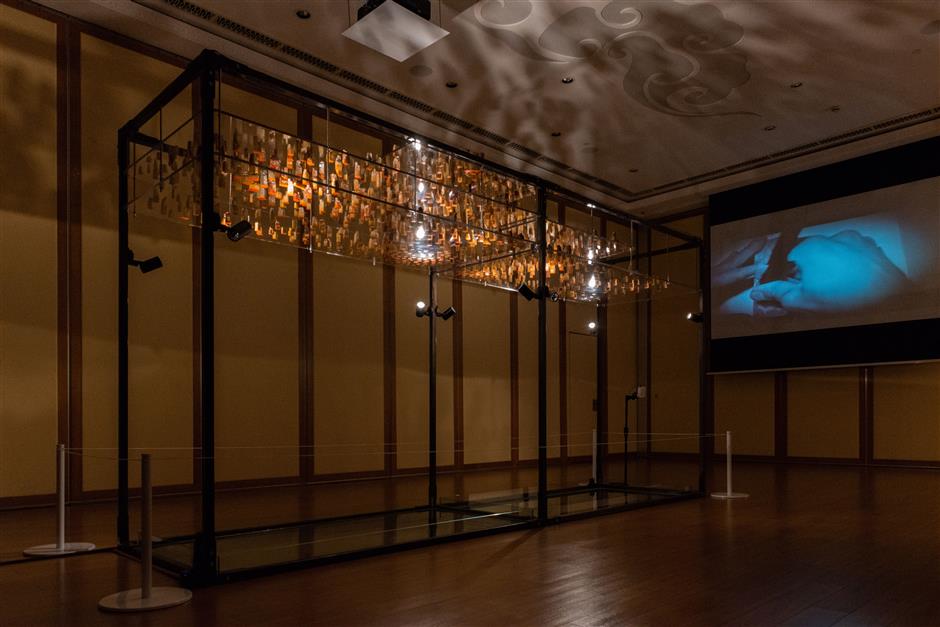 Seal carving may be an ancient art genre in China, but young artist Li Jian is attempting to transform it into a contemporary installation art via “The Diamond Sutra.”

His solo exhibition titled “Red: Out of Control” is currently being showcased at Shanghai Xingyun Cultural Art Center through September 4.

The exhibit features installation, prints and other multi-media works created by Li in recent years, which are said to be inspired by “The Diamond Sutra.”

The 27-year-old is a graduate from the China Academy of Art, majoring in calligraphy and seal carving.

“This exhibition is the outcome of my practice on how to fuse traditional seal carving with a modern aesthetic taste,” Li said. “In my eyes, seal carving is no longer the carving or design of the characters, but rather, expresses the aesthetic taste, emotion and thoughts of an artist.”

“So there is a huge gap between seal carving and the life of the ordinary people,” he said. “I wanted to diminish its original function while enlarge its artistic part. I know it is quite difficult, but I want to give it a try.”

The highlight of the exhibition goes to an installation piece titled “One Light Year,” which features nearly 1,000 stone stamps, each carved with a sentence from “The Diamond Sutra.”

The stamps hang from the ceiling above two basins. One is filled with water, and the other is empty with a mirror at the bottom. Accompanied by the sound of bubbles, when visitors look up they see stamp carvings over their heads or, if they look down, the silhouette in the water and reflection in the mirror.

“This is a true illusion that once sited in ‘The Diamond Sutra’ — whatever you see is either a dream or a bubble in the water.”

It is hard to imagine that Li carved in all 1,012 stamps.

“From the very first one to the final 1,012th one, I meant it my homage to art,” Li said. “Sometimes obsession is an enjoyment. In my eyes, belief is a feeling of certainty even though you don’t see the result when doing it.”