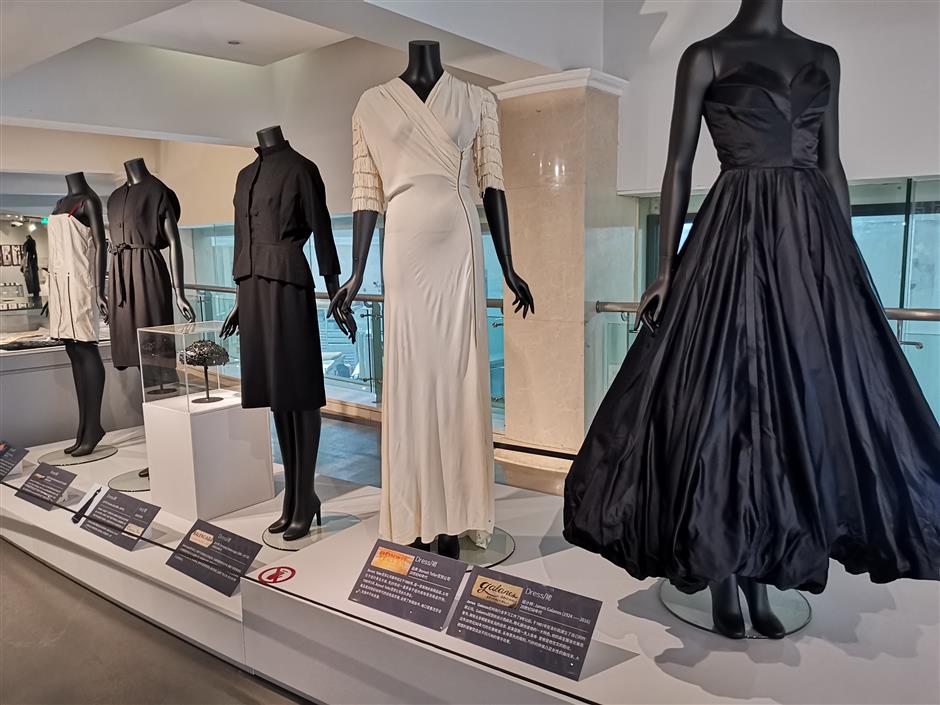 Black and white enjoys a special status in fashion industry, no matter how Pantone’s Color of the Year altered year by year. As Coco Chanel said: “Their beauty is absolute. They are the best harmony.”

Today, the match of black and white still works in the design industry. Over decades, they have repeatedly returned to the top of the seasonal runway colors, dominated global color trends, and influenced companies on color for product and brand visual identity.

Now, an exhibition at the China Silk Museum displays 50 pieces of women’s attire in black and white from the 1830s to the modern day. Visitors will see how women liberated themselves from tight corsets and pursued monochromatic fashion. 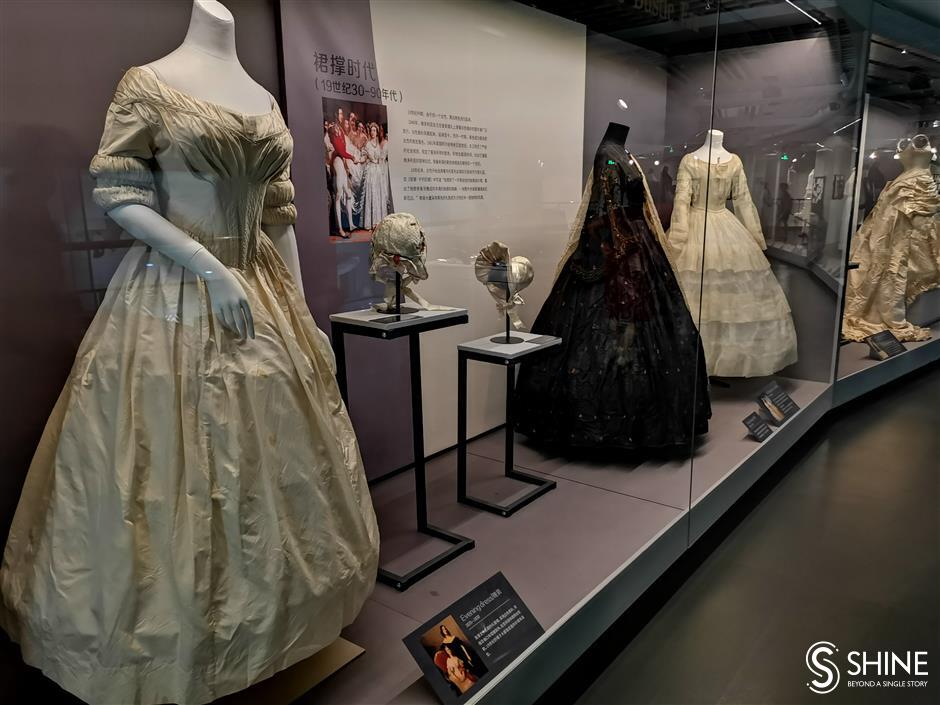 An exhibition at the China Silk Museum displays 50 pieces of women’s attire in black and white from the 1830s to the modern day.

In history, black and white was used on many different occasions. Usually Westerners wore black at funerals and white in rituals. During the 14th century, the styles of black dresses were enriched as high-quality dyes appeared. As black evolved into a powerful color, it found favor with the aristocracy.

In the middle of the 19th century, black and white returned. Queen Victoria’s wedding dress made white gowns popular. Meanwhile, the royal court stipulated that people should wear black at funerals and during mourning. Thus the two colors again dominated market at the time.

Then black and white dresses were supported by bustles, a cushion, metal or whalebone framework at the back below the waist in a bid to expand the skirt. The exhibition contains both everyday dresses and ball gowns that were commonly worn by women in the late 19th century.

An afternoon dress made of white, quality linen shows a type of luxury textile from the time, exclusive to the upper class. The white was easily stained, which subtly reflected the women’s social status and wealth.

Evening dresses were mainly made of satin, and the collar and cuffs were often designed with wrinkles. 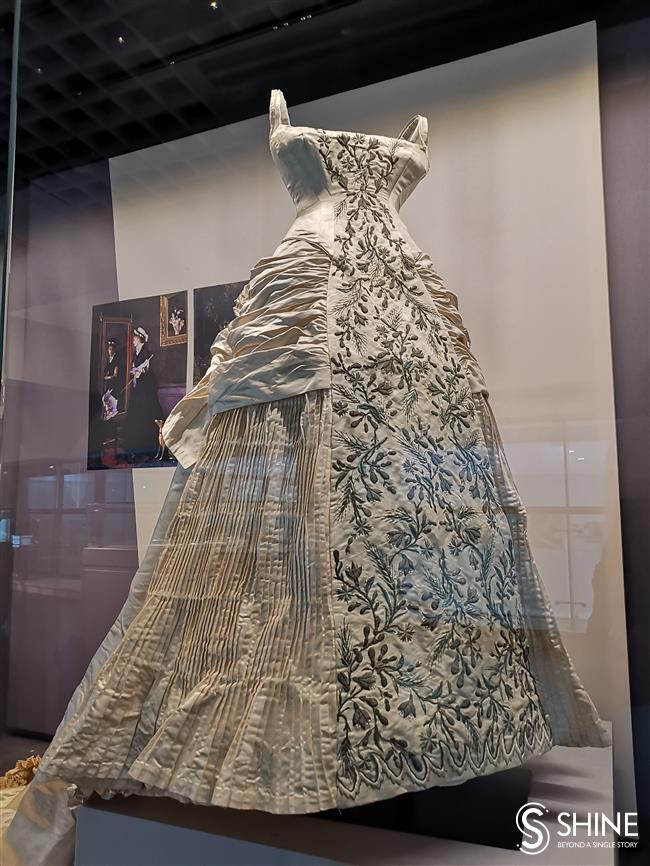 A ball gown designed into the shape of a hourglass 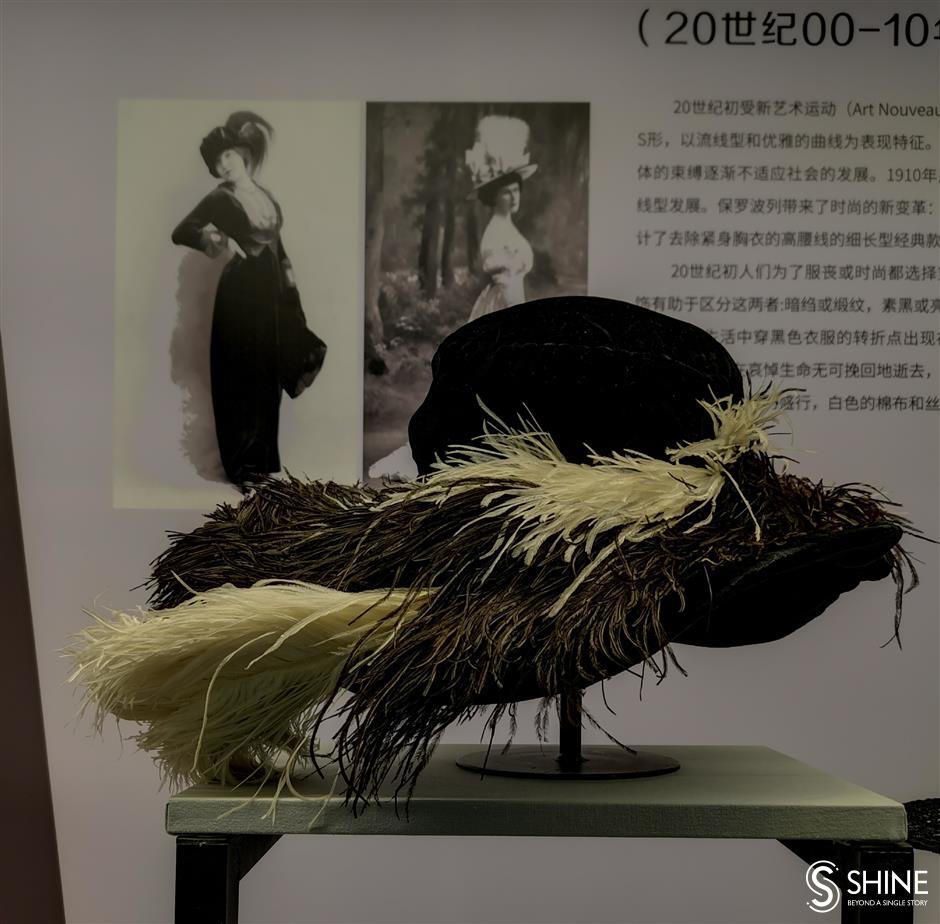 A broad-brimmed black hat worn by widows in mourning

From the middle of the 19th century, widows spent two and half years in mourning, often clad in black dresses made of wool, cotton and crepe, as shown in a mourning dress ornamented with lace and matched with a broad-brimmed black hat.

During the same period, the corsets were lengthened to the hip to accentuate or even exaggerate the curves of the lower body. A ball gown designed in the shape of an hourglass reflects the aesthetics of the time.

However, at the beginning of the 1910s, women started to rebel against tight corsets under the influence of Art Nouveau, which features undulating asymmetrical lines infused with a powerful rhythm, often taking the form of flower stalks and buds, vine tendrils, insect wings, and other delicate and sinuous natural objects.

Paul Poiret and Mariano Fortuny, two leading designers of the late 19th and 20th centuries, removed the traditional corsets and bustles, creating a new style that highlighted the waistline of dress, which soon became popular.

Along with the development of the industry, looms made it possible to produce lace in large quantities. Therefore, lace-ornamented dresses were common at the beginning of the 20th century. Floral lace patterns were widely used to ornament cuffs, corsages and shoulder parts, which could be evidenced by the exhibits.

In 1926, Vogue published a picture of a black dress designed by Chanel that became a sensation in the fashion industry. Madam Chanel designed a range of glamorous and young-looking haute couture in black and white, which brought the two colors raging back to the front of the fashion industry.

From the 1940s, a group of designers appeared in France, Spain and Italy, with their own monochromatic style, including Christian Dior, Christobal Balenciaga, Mme Agnes and Hubert de Givenchy.

In 1947, Christian Dior launched his first collection, which went down in fashion history as the “New Look.” It was revolutionary, characterized by a small, nipped-in waist and a full skirt falling below mid-calf length, emphasizing the bust and hips.

The “New Look” became a refreshing antidote to the austerity of wartime and de-feminizing uniforms. The debut collection helped France regained its pre-eminence in fashion industry. Out of Dior’s fashionable design, black and white developed into popular colors among young people.

Today, his designs from the “New Look” still affect some of the designers we know at present, and continue to make black and white the main colors seen in women’s “professional” clothes worn in offices.

Date: Through November 7, closed on Mondays