The zun is a vase-like vessel used as a ritual container to hold wine in ancient China. One of the most notable zun is the Four-goat Square Zun, which dates back more than 3,000 years.

The vessel is the largest square zun from the Shang Dynasty (1600-1046 BC) that has been found so far. It is displayed in the National Museum of China in Beijing.

With curly horns, the four goats, looking solemn and calm, are cast on the corners. They face in four directions. Between each pair, there is a high-relief dragon wiggling along the sides.

Supported by the ring foot, the zun has a wide mouth to facilitate pouring.

The ritual bronze vessel was unearthed in Huangcai Town in Ningxiang County, Hunan Province, in 1938.

One day, when villager Jiang Jingshu and his brothers were digging a hole to plant sweet potato, they felt something hard. They thought it was a stone and tried to remove it. When they first hoed the “stone,” a piece of rusty copper sheet 10 centimeters long and 8 centimeters wide flew out of the soil. Some lines and patterns could be vaguely seen on one side of the piece.

Digging deeper, the brothers finally unveiled the exquisite zun. Although it was dark, the huge and heavy zun still caught the eye of many passers-by as the brothers took it home. The news quickly spread.

At that time, many people made a fortune out of trading antiques and their informants, local villagers, kept them quickly informed.

On hearing the news, an antique dealer, who owned the Wanlishan Shop in Huangcai Town, rushed to the Jiang brothers’ home that very night along with his servants.

He was fascinated by the bronze vessel and paid 400 silver dollars (value of today’s US$23,300) on the spot.

Transferring the treasure to his home, the owner of the Wanlishan Shop secretly sent a person to get in touch with Zhao Youxiang, a leather craftsman in Changsha in Hunan Province.

Zhao also secretly engaged in the trading of antiques. So the shop owner invited him to take a look.

He also ordered the messenger to tell Zhao: “If you don’t bring enough money, don’t come.”

Trusting the shop owner’s reputation, Zhao decided to close his shop for several days and brought all his money to the Wanlishan Shop.

Unexpectedly, the shop had been closed and was guarded by armed soldiers when Zhao arrived.

But the closure had nothing to do with the Four-goat Square Zun. Instead, it was because other cultural relics were sold by the shopkeeper.

Zhao dared not stay at the shop too long, so he stayed at an inn.

“If you want to see the treasure, follow me,” the man whispered.

Strolling through shabby alleyways, they stopped at a dilapidated farm house.

The owner of the Wanlishan Shop, who had fled before the soldiers arrived, opened the door for them.

Obsessed with the antique, Zhao promised that he would come back with enough money in three days.

Returning home, Zhao met three other antique dealers including Yang Kechang. They decided to pool their resources to buy the zun. The transaction price was raised to 10,000 silver dollars.

The four dealers moved the antique to a shop in Jinggang town in Hunan Province and planned to resell the zun with a starting price of 200,000 silver dollars.

But none of them was willing to leave the zun to find a buyer because they didn’t trust each other. 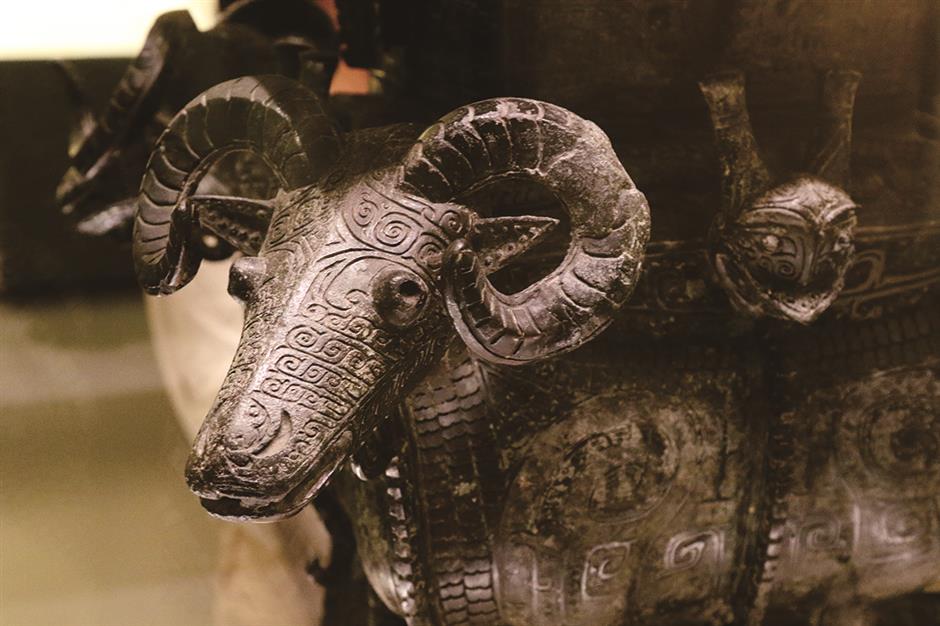 One of the most notable zun — a ritual container — is the Four-goat Square Zun, which dates back more than 3,000 years.

Eventually, they cast lots to determine who should go out to find a seller.

Yang was the “lucky dog.”

When Yang was about to leave the hideout, he heard other three dealers conspiring to abandon him.

Indignant and apprehensive, Yang turned them in to the government.

A team of special agents was sent to investigate the matter instantly.

But the dealers suddenly fled, and the national treasure also disappeared.

The impression the square ring foot had left on a cloth was still there, indicating that the zun had only recently been removed.

Yang believed that the zun was still in the shop. As expected, the authorities found the treasure and the three dealers in a cellar beneath the courtyard.

Given to the Kuomintang, the Four-goat Square Zun was then kept in Hunan Provincial Bank.

In the next 10 years, the cultural relic dropped out of the sight due to the outbreak of the War of Resistance against Japanese Aggression.

Its turbulent history wasn’t figured out until 1952, when China’s first Premier Zhou Enlai orderd a search.

In 1938, Japanese forces had invaded Changsha and the bank moved to Yuanling County in Hunan Province, along with the national treasure.

But the bank was destroyed in a Japanese air raid and the delicate antique was shattered into dozens of pieces.

After the war, the bank returned to Changsha while the fragments were stored in a warehouse of waste products.

After a year-long restoration, the national treasure was given new life.

In 1959, the Four-goat Square Zun was transferred to the National Museum of China, where it remains.