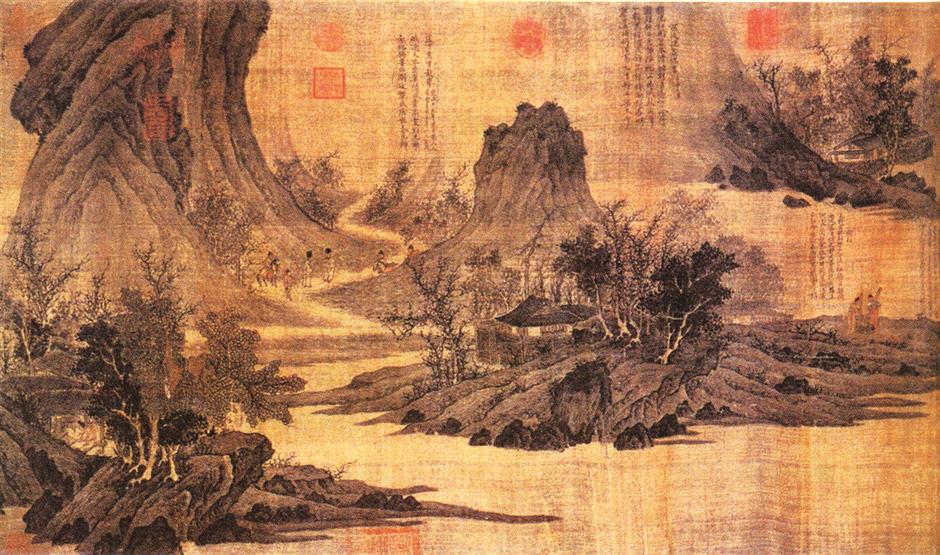 Born in Huzhou in Zhejiang Province, Zhang Xian (990-1078) was a versatile scholar from the Song Dynasty (960-1279). Regarded as a representative poet of wanyue pai, or graceful and restrained poetic genre, Zhang was also the creator of a renowned handscroll called “Shiyongtu,” which means illustrating ten poems.

The ten poems were written by Zhang’s father Zhang Wei. One day in 1072, the 82-year-old Zhang Xian was fishing at the South Garden in Wuxing County. He suddenly thought of the poems his father wrote about the place.

Reading through his father’s works, Zhang was deeply touched by a poem about a governor surnamed Ma from Wuxing County meeting six senior scholars. He then decided to depict the text.

At the far-right side of the painting, there is a double-eave pavilion with a hip-and-gable roof where senior scholars are watching or playing chess. Climbing the stairs, two elders approach them. Their attendants help them carry a guqin, a plucked seven-string Chinese instrument, and two walking sticks.

Another two senior scholars standing in the opposite pavilion are chatting by the balustrade while enjoying the scenery.

The middle part of the painting mainly portrays river scenery. A boat sails with the wind. Two women are washing clothes by a riverside. The shores of the river are filled with plants.

A high mountain stands at the left side of the handscroll. At the foot of the mountain, an elderly man sees Ding Xun off. The xiucai (the title of students who passed imperial examinations at county level) Ding is heading to the national capital to participate in an imperial examination.

At the lower left corner of the painting, a woman is weaving cotton cloth in a hut. The picture shows a peaceful garden environment and the idyllic lifestyle of the senior scholars.

It is said that “Shiyongtu” is Zhang’s only painting, which implies he missed and respected his father.

His family made a living by farming. Studying hard, Zhang Wei became an official. After the birth of Zhang Xian, Zhang Wei devoted himself to his son’s education.

Influenced by his father, Zhang was interested in poetry since his childhood. Zhang’s father also invited a painter to teach his son painting.

The tutor followed the painting style of Jing Hao, who was a Chinese landscape painter from the Five Dynasties and Ten Kingdoms period (AD 907-960).

Jing is regarded as one of the most critical figures in the development of the Northern landscape style — grandeur pictures with delicate strokes.

Filled with stamps and comments, the handscroll passed through many collectors’ hands, including Emperor Qianlong (1711-99) of the Qing Dynasty (1644-1911). There are at least 17 Qianlong’s prints on the handscroll.

The last person stamped on the painting was Puyi (1906-67), the last emperor of the Qing Dynasty.

After the downfall of the imperial court, Puyi asked people to smuggle a number of national treasures out of the palace. They were moved to today’s Palace Museum of “Manchukuo” in Changchun, Jilin Province.

After 50 years of silence, the painting reappeared. In 1995, a person carrying the painting came to Beijing Cultural Relics company located on Lulichang Street to visit its manager Qin Gong, who was an expert in the identification of cultural relics.

Qin was thrilled by the artifact and identified Zhang Wei’s poems. However, the collector took the handscroll back and left.

Qin was determined to help the treasure return to its rightful home so he looked for the collector and told him that he would make a lot of money if the painting was auctioned. The collector agreed with his proposal.

Before the auction, Qin invited a group of authoritative experts to identify the handscroll again. The experts included famous connoisseurs Xu Bangda (1911-2012) and Xie Zhiliu (1910-97). They recognized the authenticity of the painting and sent a report to the National Cultural Heritage Administration, suggesting they purchased the national treasure.

The administrative agency replied that the painting could be only bought by museums in China and state-owned enterprises and institutions.

On the auction day, the hall, which could accommodate only 500 people, was crowded with people. Yang Xin, former deputy director of the Palace Museum in Beijing, attended the auction on behalf of the museum.

During the auction, some attendees shouted “stop bidding and let the Palace Museum have it.” Finally, the Palace Museum spent 19.8 million yuan on the handscroll. Although the price was substantial, calligrapher guru Qi Gong (1912-2005) said the treasure was entirely worth it.