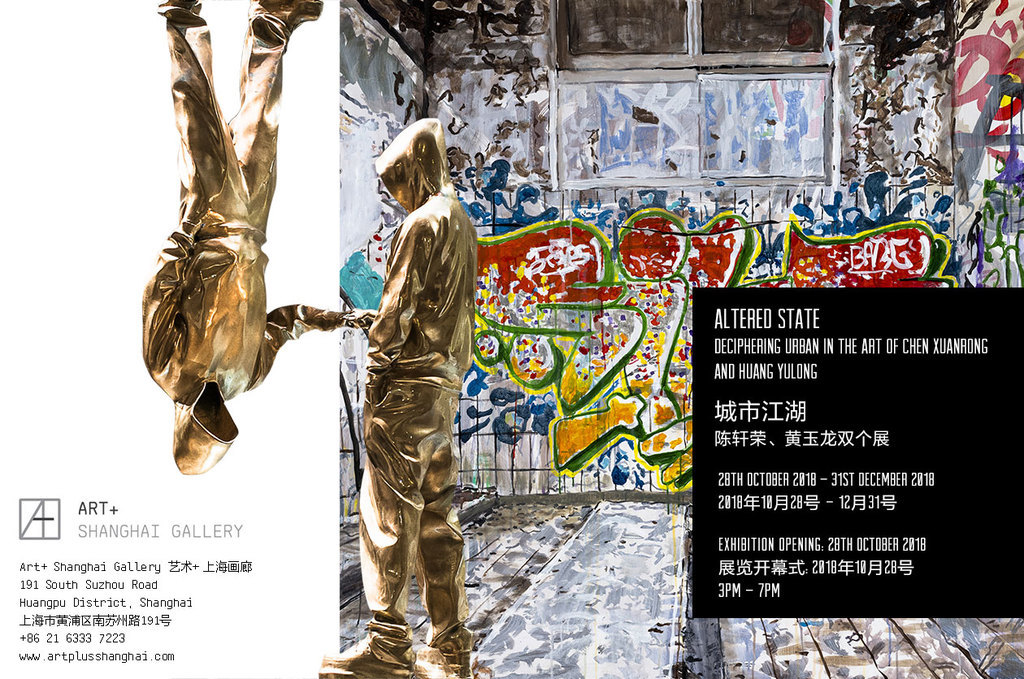 The exhibition Altered State: Deciphering Urban in the Art of Chen Xuanrong and Huang Yulong echoes the atmosphere of urbanity anywhere, but it also forges an entirely unique way of conceptualizing the new urban individuality in China. Two artists with almost a 10-year gap in age difference create works influenced by hip-hop culture, or what we interchangeably call street culture. Chen Xuanrong’s graffiti-like works rendered in acrylic and stretched across large canvases provide the setting of the urban realm, while Huang Yulong’s ‘hoodie character ’, dressed in bronze or stainless still, inhabits the scenes portrayed by Chen Xuanrong.

With its uncompromised and in your face attitude hip-hop has swamped the minds of urban youth everywhere, regardless of race, ethnicity, gender or age. Hip-hop owes its beginning to a particular time and place, but since it has traveled across the oceans its state has been inevitably altered. Nowadays, the hip-hop movement owes its original and authentic character to the place it is practiced and lived. The key to its success and acceptance has always been and always will be about telling the story of one’s own: where you come from and who you really are.

Huang Yulong’s enthusiasm for hip-hop has been driving his artistic career for almost a decade. Fascinated with its free, passionate and rebellious attitude, he uses his work as a channel to express the magnitude of emotion that takes over him when he listens to rap or dances to hip-hop music.

The affair that started off as an infatuation with something strikingly different and seductively foreign during the teenage years turned into a life-long commitment, a state of being, and simply a way of life. Yet, with his knowledge and outlook being largely shaped by Chinese culture, he taps into his own tradition and heritage to enrich his work as an artist. Yulong takes the conventions, philosophies, and ideologies of east and west, pulverizes their structure and logic to make an indistinguishable new mass that is itself a new work of art and a new cultural and social paradigm.

For Chen Xuanrong the affair with street art, or to be more precise with the visual element of it – graffiti, has ironically started when he set off on a trip to the east side of the United States to marvel at rich collections of Fine Art masterpieces in the museums. A real feast for the eyes, however, was discovered outside of the museums while walking the streets of big cities or commuting by train. Since then he found himself tagging on the streets, but also implementing the visual elements of graffiti in the works that he has created indoors. Finally, ‘collecting’ most visually compelling graffiti pieces in his sketchbook and giving them a second life in his works on canvas has turned into a part of his creative routine.

Chen’s acrylic on canvas presented for the duo show incorporate the graffiti styles that he has collected during his travels alongside his own style of writing and stickers. They are depicted on the walls, doors and staircases, trams and abandoned houses, public bathrooms, everywhere where you expect to come across with the graffiti. Some works give you an impression of the wall that became a battlefield for a style war between several graffiti artists. Chaotic renderings of vandals left in a hurry are layered over crisply outlined and elaborated graffiti. Pushy stencils of ads with phone numbers lurk through the hectic stains of paint.

The work by Xuanrong and Huang Yulong mirror the richness of identities, ideas, and attitudes that are so characteristic of contemporary urbanity. In their duo exhibition Altered State: Deciphering Urban in the Art of Chen Xuanrong and Huang Yulong the artists create new settings for new icons of their generations that are more up-to-date with the period of confusion and uncertainty, diversity and integration.