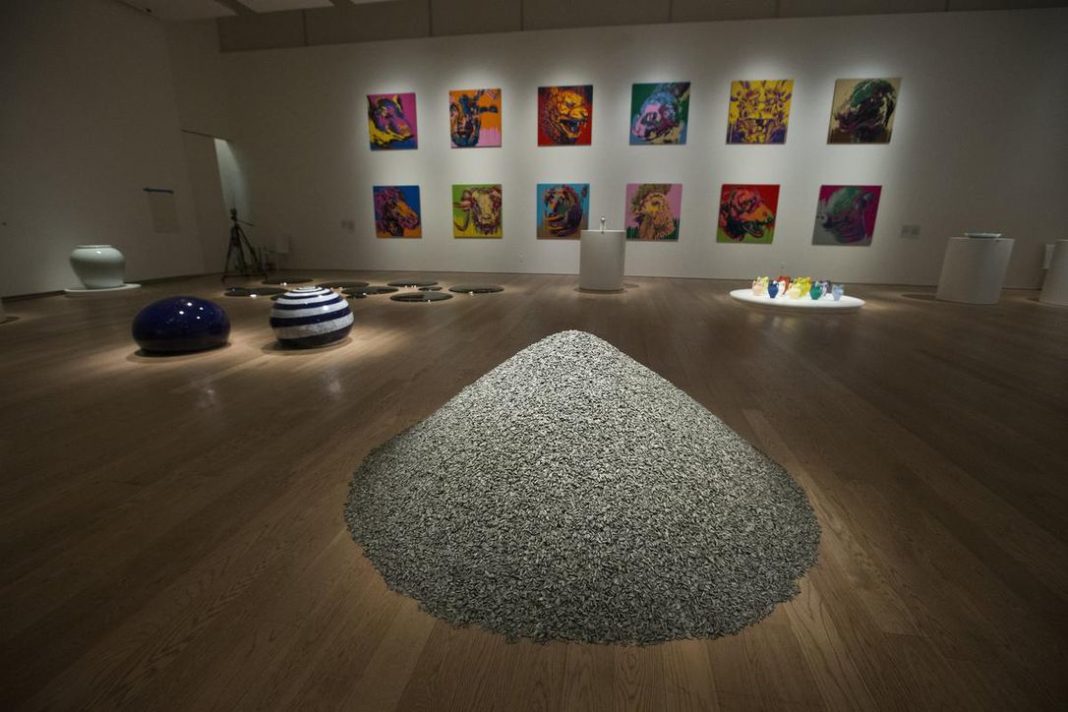 A single sunflower seed you can hold on your fingertip. One hundred you can carry in two hands. A thousand might fit in your backpack or briefcase. But a million sunflower seeds and you have a hill. One billion — a mountain.

Deposited dead centre in the Gardiner Museum’s third-floor exhibition space, in a mound hip-high, is a pile of porcelain sunflower seeds by Chinese dissident artist Ai Weiwei. First presented in 2010 carpeting the floor of London’s Tate Modern Turbine Hall with more than 100 million such sculpted hulls, Sunflower Seeds is Ai’s largest ceramic project to date and one of the most notable artworks of the 21st century so far.

Forming the centrepiece of a new exhibition, titled Ai Weiwei: Unbroken, which explores themes of social justice through the activist-artist’s body of ceramic work, the Gardiner has one tonne of Ai’s Sunflower Seeds on display.

The seeds were produced in China’s “porcelain capital,” Jingdezhen. More than 1,600 artisans handmade every husk and striped each with four or five strokes of black pigment, explains Gardiner Museum chief curator Sequoia Miller.

“What you have are these individual objects that are remarkably similar, yet each one is distinct and different in this giant mass,” he says, “and they gain meaning through their multiplicity and by coming together.”

The seeds, a ubiquitous Chinese street snack, represent, perhaps, Ai’s compatriots. (Propaganda posters from the Cultural Revolution often depicted Chairman Mao as the sun and China’s population as sunflowers turned toward him.) The work broadly, then, is about the power of collectivism. The heap symbolizes the mass made when individuals unite.

“It is the one versus the many,” Miller says. “And when the many come together to form one, when is that one effective? What do we gain by working together? What sort of force or resistance do we create?”

It is an interesting moment to present this work in Canada, amid political tension with China as Canadians remain detained there following the arrest of Huawei executive Meng Wanzhou in Vancouver.

In a statement released through the Gardiner Museum leading up to the exhibition, Ai calls the actions of the Chinese government “unsurprising.” These are examples of human rights abuses common in China, he says, and the regular practice of a system Western powers have to date both ignored and exploited. “The West’s apparent conflict with the situation in China is because of its refusal to acknowledge its complicity in creating this monstrous regime,” Ai writes. The abuses — whether unlawful detentions, hazardous labour or environmental damage — are not isolated Chinese problems or siloed Canadian problems, but world problems arising from global capitalism.

If there’s to be any hope, the mountain of sunflower seeds must grow.

Ai Weiwei: Unbroken will be on display at the Gardiner Museum from February 28 to June 9, 2019.