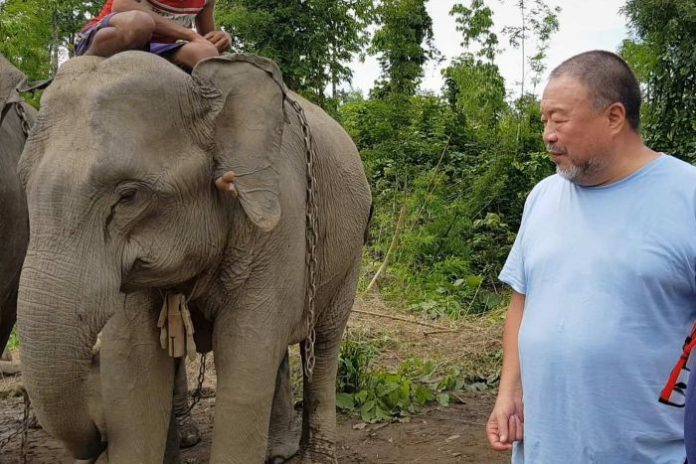 Elephants have been used in Myanmar’s timber industry for decades, work that has seen the creatures drag heavy logs through forests.

However, animal-protection organisation Four Paws said a ban on timber exports meant many working elephants were now “jobless” and viewed as a financial burden.

Many have been chained up in camps, while others are being smuggled out of the country for use in the tourism industry. Some are also being abandoned or killed.

Ai Weiwei visited several camps with Four Paws workers, and posted videos on Instagram of what he saw.

In a video posted by Four Paws, the artist said the elephants’ living conditions were far from what he expected.

“I feel it’s a creature, it’s a human being itself, and we know very little about it,” he said.

“I can feel its full emotion and intelligence. Unfortunately it has been put in this kind of position by humans, which is not right but also not fair.

“They deserve to live in freedom, but have always been mistreated. Let them be free … We have to understand we are human by doing something nice for other species, otherwise we fail as a human being.”

In one video posted on Instagram, Ai Weiwei captured a young elephant in one of the camps being poked and struck in the head with a stick.

However logging resumed at a reduced level, and a decade-long ban in the Bago Yoma Hills in central Myanmar also remained in effect, leaving elephants in that area out of work.

In response to this, Four Paws is constructing one of South-East Asia’s largest elephant sanctuaries in the Bago region.

Known as Elephants Lake, it will cover an area of 17,000 hectares and have veterinarians and other experts on staff to care for former working elephants, as well as injured or orphaned wild elephants.

The animals will later be released into the nearby North Zar Ma Yi Forest Reserve.