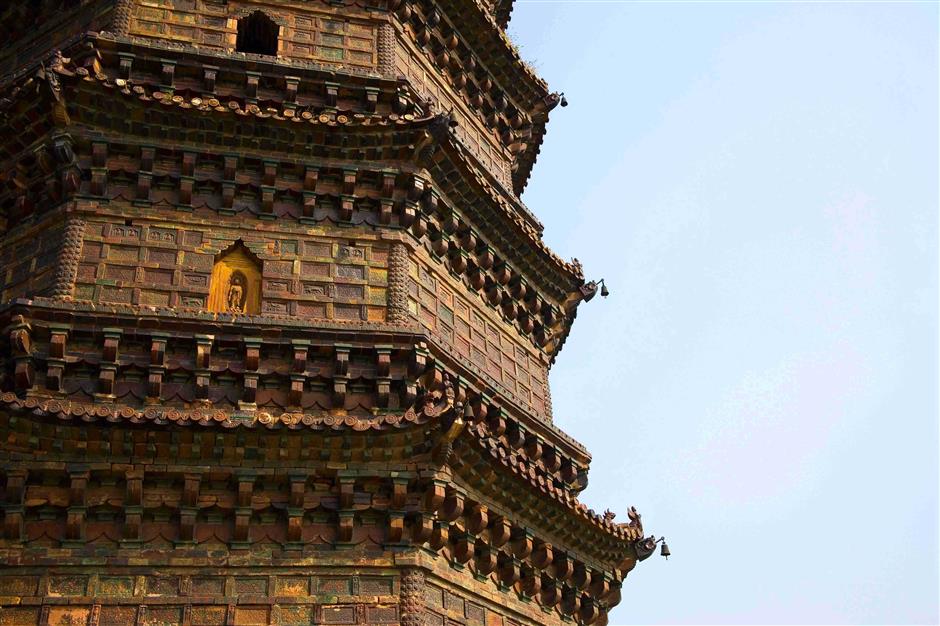 Kaifeng’s Iron Pagoda is a testament to skilled and unique ancient building techniques and also showcases a thousand years of history.

Local people in Kaifeng, located northeast of Henan Province, take huge pride in their Iron Pagoda even labeling local products with the “Iron Pagoda” brand. Many visit there to obtain a blessing.

Originally standing at 55.88 meters, the pagoda is actually built with bricks.

But they are iron-grey in color when viewed from afar, hence the “Iron Pagoda” monicker.

It was commissioned in 1049 by Emperor Renzong of Song as a replacement for the first wooden pagoda which had been destroyed by fire after being struck by lightning.

The Iron Pagoda is not the tallest pagoda in China but its architectural style makes a regal impression on visitors.

The Iron Pagoda was built with more than 50 different types of glazed copper-colored bricks that imitated the former wooden pagoda’s structure using the traditional method of dougong, or bracket set.

Traditional dougong is a unique method of using interlocking wooden brackets to build eaves and create floors. The interlocking bricks are designed to fit together without the use of glue or fasteners. 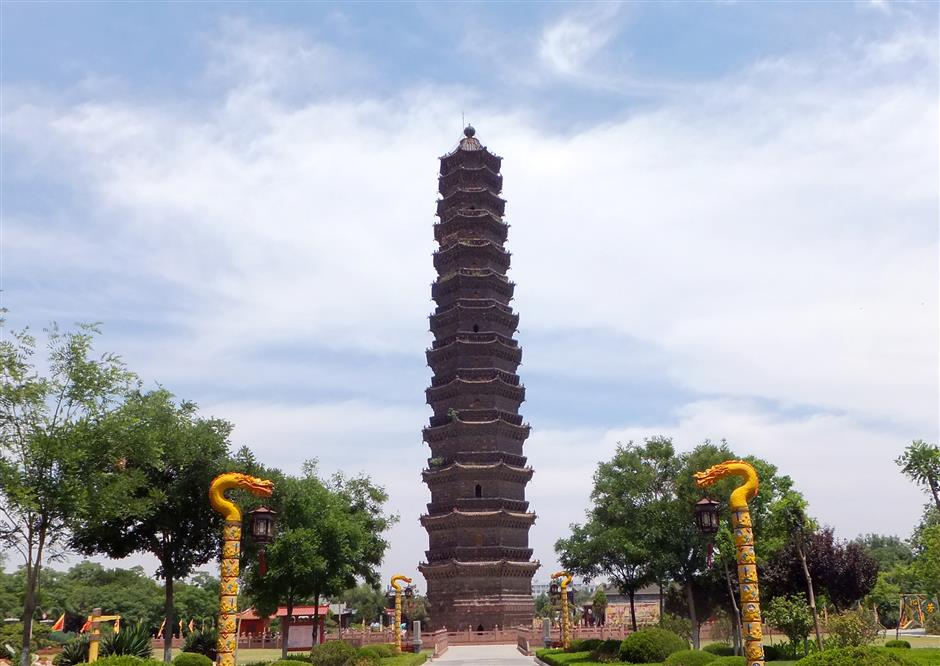 The Iron Pagoda was reputedly designed to tilt slightly to resist strong northwest winds. Today it tilts slightly to the southeast.

The 13-story Iron Pagoda stayed faithful to the traditional structure of Buddhist pagodas with an octagonal base and odd-numbered floors.

The Iron Pagoda now stands at 55.08 meters instead of 55.88 meters as the lotus pedestal base of the tower and the bridge that was connected to the Pagoda were all buried during one of the Yellow River’s floods.

The Iron Pagoda was initially built on a hill named Yishan. Under the pagoda lay a huge underground palace and passage way. Now all that is left standing is the Iron Pagoda.

In 1936, famous architect Liang Sicheng visited the tower and noted how even though the lotus pedestal can no longer be seen, you can still view the upper-half of the sacred seat as the rest of the pagoda is standing strong.

The walls of the Iron Pagoda are covered with 50 different types of engraved patterns of mythical creatures, legendary creatures, flowers, monks and standing and sitting Buddhas. Under the eaves are 104 bells that ring in the wind. Another unique feature of the tower is the design and placement of the windows. There are two different types of windows — blind and open.

Blind windows are window molds while open windows are placed in a strategic pattern following the four cardinal directions.

Like the Leaning Tower of Pisa, the Iron Pagoda leans slightly.

Apparently, the tower was designed to tilt slightly to resist strong northwest winds.

Today, the tower tilts slightly toward the southeast direction.

Staying true to its name, the Iron Pagoda has stood the test of time.

Its structure reflects the advanced building techniques of the Song Dynasty (960-1279) as the outer and inner walls are closely connected forming an earthquake-resistant structure.

Over a thousand years, the Iron Pagoda survived and stood firm.

It is said the pagoda has withstood 43 earthquakes, 10 massive hailstorms, 19 windstorms, six floods and 17 rainstorms.

The Iron Pagoda has also witnessed many historical events — one of them the Japanese occupation.

On June 5th, 1938, Japanese invaders assumed the Iron Pagoda was a watchtower and launched an artillery attack.

The 8th and 9th floor of the Pagoda bore the brunt of the attack with major damage to the exterior walls.

After the founding of the People’s Republic of China, the pagoda underwent reconstruction and restoration in 1957.

Facilities such as lightning protection, handrails and lights were installed to ensure that the ancient Iron Pagoda is able to stand tall for the next millennium.