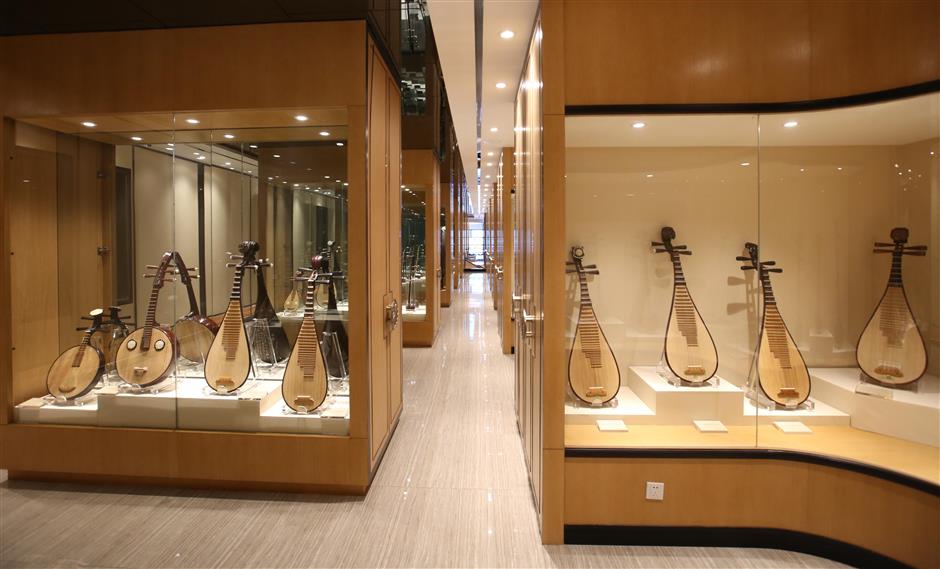 Tucked away in the city’s southwest, near the ancient town of Qibao, the Shanghai No. 1 National Musical Instruments Factory is China’s largest and earliest traditional instruments manufacturer.

Its exterior may be rather plain-looking, but inside is a fascinating trip through the history of musical instruments in China. The museum displays more than 300 precious musical pieces, made variously of bamboo, silk, wood, stone clay and metal to be plucked, beaten, blown or struck by musicians. 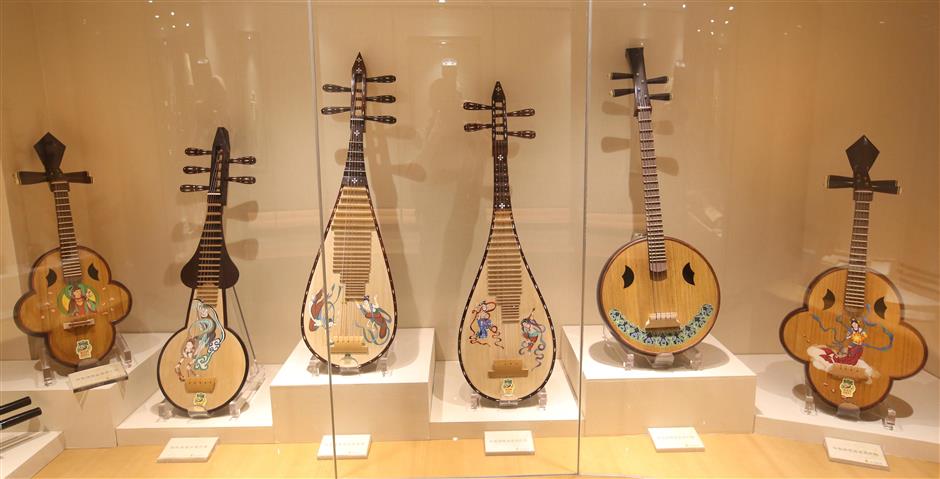 Shanghai’s traditional music industry can be traced back to the reign of Emperor Qianlong (1736-96) of the Qing Dynasty (1644-1911), though it didn’t really start to thrive until the reign of Emperor Daoguang (1821-50) around the downtown City God Temple area. There, small workshops mushroomed, with craftsmen making percussion and stringed instruments. By the end of 1955, Shanghai had more than 60 instrument makers, employing 400 workers. 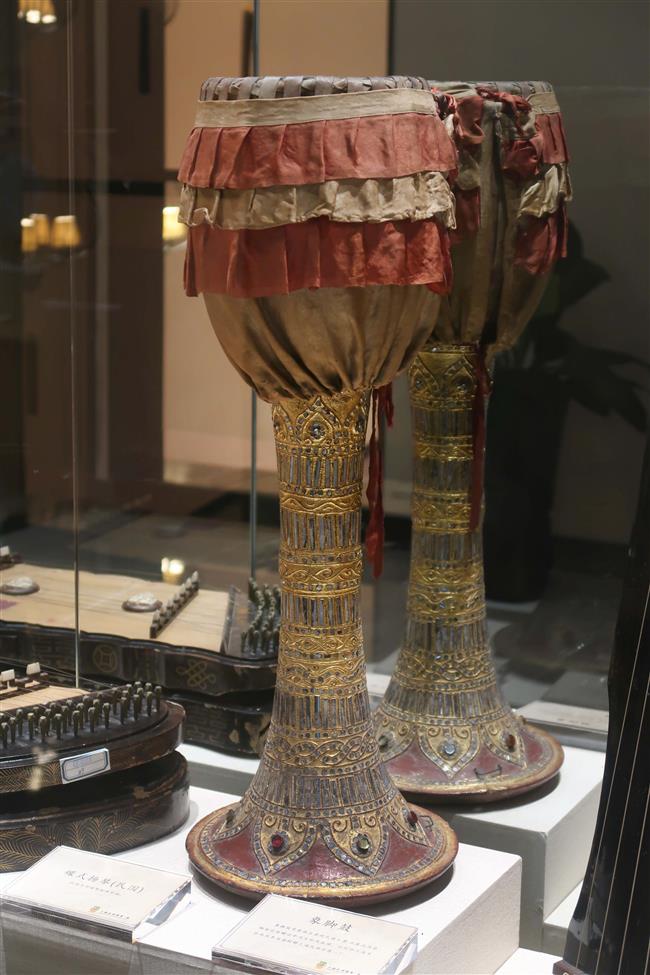 The industry was reorganized in 1958 when all the privately owned small workshops were amalgamated into three state-owned factories. Among them was the Shanghai No. 1 National Musical Instruments Factory, which made mainly the two-string erhu, the four-string pipa and the guzheng, or Chinese zither. 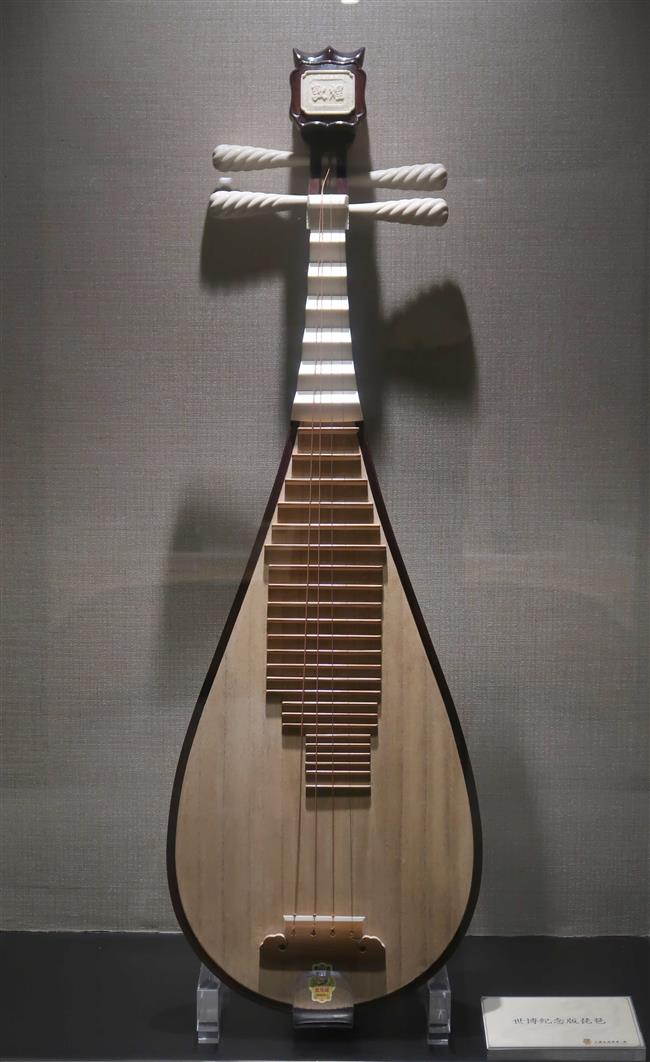 The factory’s Dunhuang brand was named after the city in Gansu Province noted for its Buddhist cave art. Dunhuang quickly became popular among collectors, especially for limited-edition, handmade instruments.

A pipa made in the Republic of China period (1912-49) shows how much that instrument developed over time. It has evolved from a thin, slender shape 100 years ago to today’s plumper resonator, or sound box, which generates an ethereal resonance. 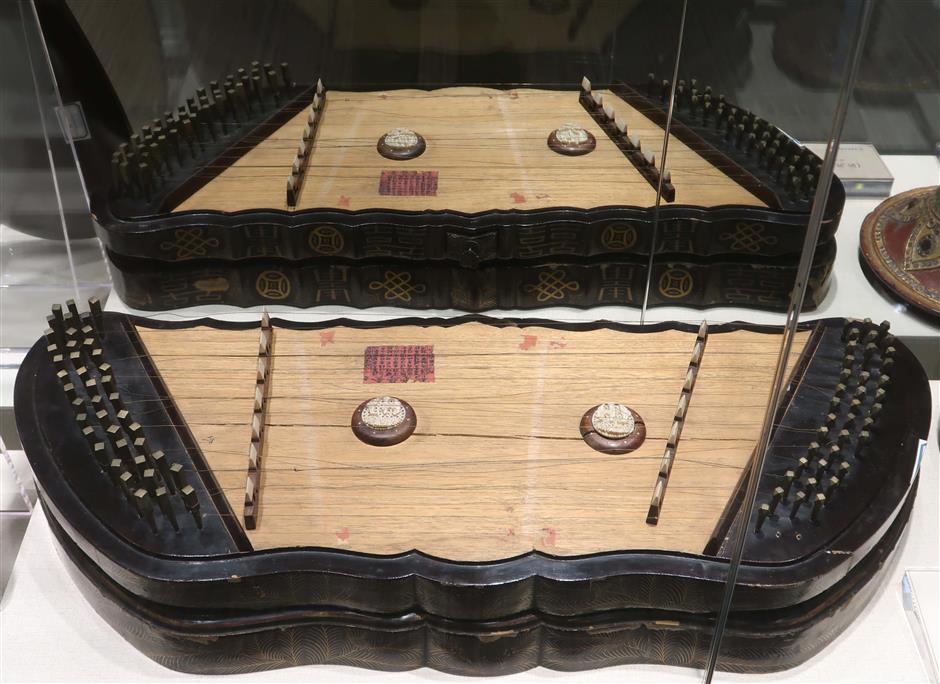 The erhu, sometimes called the “Chinese violin,” has likewise evolved from the bamboo instrument of the early 20th century to today’s version in wood. The resonator’s shape has changed from cylindrical to hexagonal. This was the instrument used by the famed blind musician Ah Bing (1893-1950) in his performances.

The museum exhibits show us how a musical instrument’s shape was often adapted to meet the needs of newly created music scores. 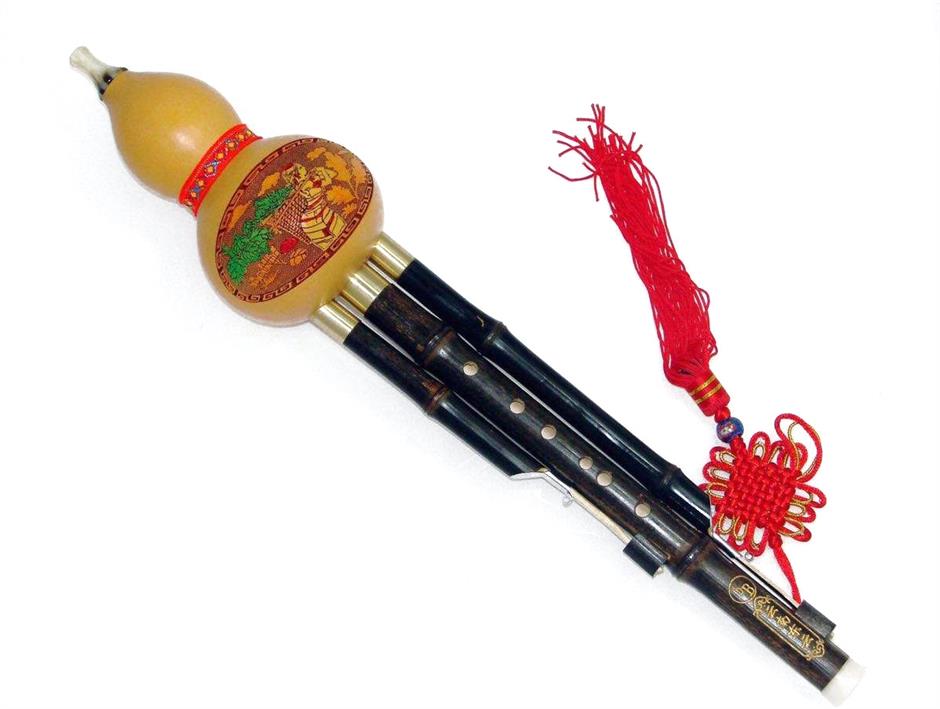 In the 1970s, national standards on the shape, structure and quality of traditional Chinese musical instruments were written. Shanghai No. 1 National Musical Instruments Factory master Xu Zhengao, now 85, drew up standards for the guzheng.

Back in older times, the zither was often called a “coffin” due to its black color and the clumsy rectangular shape. In the 1960s, Xu designed the instrument with a curve at one end, which allowed more decoration. Inspired by the architecture in the City God Temple area, he designed a pattern of “two cranes flying to the sun.” 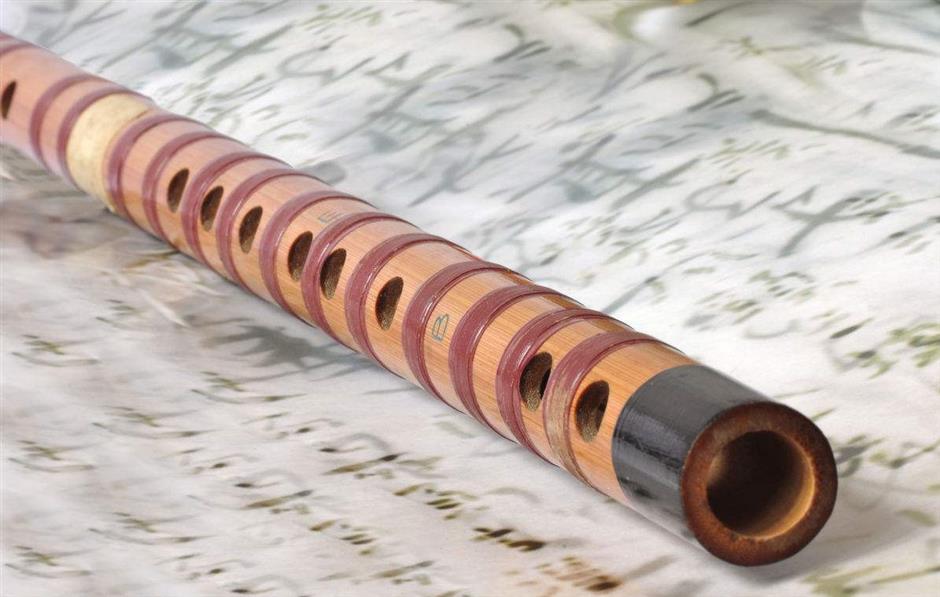 To mark Xu’s 80th birthday in 2013, the factory issued 80 limited-edition guzheng made of old mahogany and carved with the classic cranes patterns.

Another highlight is a full-size set of pipa replicating those found in the ancient murals of the Dunhuang caves. The set was commissioned by the China National Traditional Orchestra in 2013. 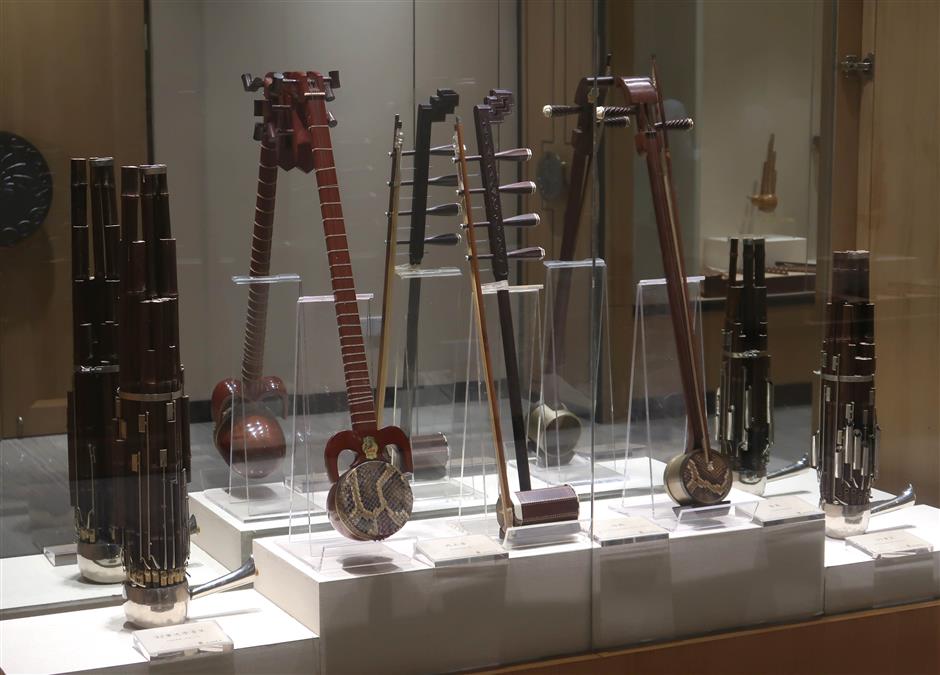 The pipa look exactly like those in the murals, but their construction was adapted to resonate in an age of modern stages and audiences. For example, the strings were made of steel wire instead of the silk, goat gut or chicken tendon of yore.

During the Tang Dynasty (AD 618-907), a group of Japanese envoys took a large number of traditional Chinese musical instruments back to Japan, where they were carefully preserved down the ages. The museum has replicas of those instruments. Strings, including pipa and ruan, a lute with a fretted neck, were made of wood and goat’s skin, with beautiful patterns painted on the surfaces.

Making fine musical instruments like these is the purview of skilled craftsmen. There are yin and yang to be considered, with timber in an instrument reflecting its juxtaposition to the sun.

What’s more, whether an instrument’s wooden parts come from the same tree and the thickness of the face can produce different sounds.

An experienced craftsman must have keen ears to distinguish subtle differences. Generally speaking, the thinner the board, the brighter the sound. Craftsmen know how to polish the board repeatedly until the best sound is achieved.

It usually takes an apprentice at least eight years to learn all of these complicated procedures and probably decades to become a real master.

In the erhu exhibition hall, the instruments are made of vintage wood, metal, crystal and cloisonné enamel.

Some of the sanxian, a three-string instrument that looks like the erhu, have surfaces made of python skin. Due to animal protection laws, all the python skins used in the factory are bought from legally certified snake farms. But musicians taking the sanxian for performances abroad have to register with customs in advance and produce certificates showing the skins’ origin.

In a traditional Chinese orchestra, most of the instruments are high pitched. Western cellos were used to provide some bass. Since the 1950s, generations of musicians have strived to devise traditional instruments with lower registers.

The museum also displays a dabeila, a cello-like instrument, a hexagonal bass erhu and a new vase-shaped stringed bass that debuted last month.

A bamboo flute that’s one origin of Chinese music

Chinese civilization is one of the oldest in the world, and music has always been an important cultural component.

There are different versions about the birth of music in China, many rooted in myths and legends. One version tells of a man named Ling Lun, who lived during the reign of the Yellow Emperor (2697-2596 BC).

He is said to have made a flute that could reproduce the sound of the mystical phoenix.

Ling was said to have captured a phoenix by playing the flute.

The instrument in the story is a dizi, which is still used today in folk music and was always popular with the masses because it was light and easy to carry. The flute was originally played while held vertically until foreigners introduced horizontal playing.

Another prominent Chinese folk instrument is the guzheng, or Chinese zither. It dates back to the Warring States Period (5th century-221 BC). It is a long wood instrument with anywhere from 15 to 21 strings. Movable bridges called qinma support the strings, which were originally made from twisted silk or sheep gut. By the 20th century, steel strings were used.

The guqin is a similar instrument, with seven strings and no bridges. It is often considered the premier solo instrument of Chinese music, with a history dating back more than 3,000 years

Playing the guqin was one of the four arts that ancient scholars were expected to master, along with painting, calligraphy and an ancient form of chess. The great sage Confucius was a master of the instrument.

Some traditional instruments, like the pipa, which resembles a lute, actually originated outside China. The erhu, often called the Chinese fiddle, came from Central Asia. Its sound is produced by a bow drawn across the two strings and by the vibration off a sheet of python skin stretched across wooden frame of the sound box.

Other prominent traditional folk instruments are the huqin, a family of string instruments with hexagonal or octagonal sound boxes, and the hulusi, a wind instrument made from a bottle gourd and bamboo sticks.