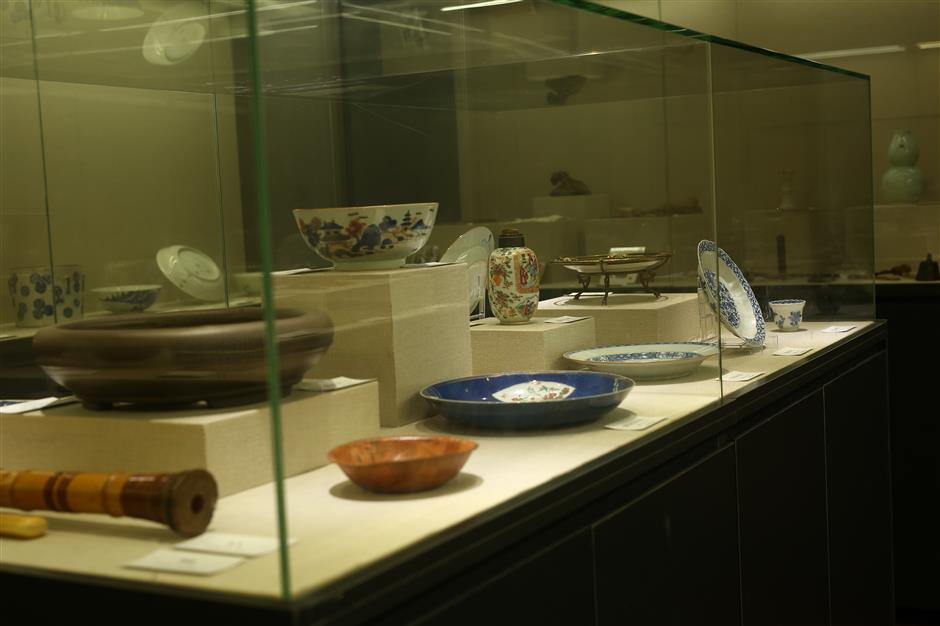 It’s the latter misfortune that most interests porcelain enthusiast Tong Weicheng. He has set up a studio with porcelain collected from hither and yon. Nearly all the pieces are cracked, with “nail” patches on them.

The mending method — called ju in Mandarin — is the theme of his gallery.

Tong, 37, an Anhui Province native, is one of the rare breed of professional porcelain menders left in China. The studio he operates in Fengxian District offers training in ju to try to preserve the thousand-year-old craftsmanship.

“The situation is better than it was three years ago, when I started to learn porcelain mending,” Tong says. “Back then, less than 10 people were engaged in the craft, but now it has become more popular again among porcelain lovers. However, commercial vibes might take the craftsmanship to an extreme, which I hope I can do something to stop.”

Tong worked as an advertising photographer for 12 years before quitting his job and turning to porcelain mending full-time. The abundant income it brought in allowed him to buy an apartment and settle in Shanghai with his wife.

Wealth, however, didn’t give him much contentment. A casual visit to the Shanghai Museum changed his life. He lingered in the porcelain hall and couldn’t pull himself away.

“At that time, I thought I would study porcelain and become a collector,” he says. “When I first met my mending master, I wanted to see more broken porcelain. The fracture surfaces were very precious study material.”

After he learned mending and practiced the art for months, he fell completely in love with the craftsmanship. 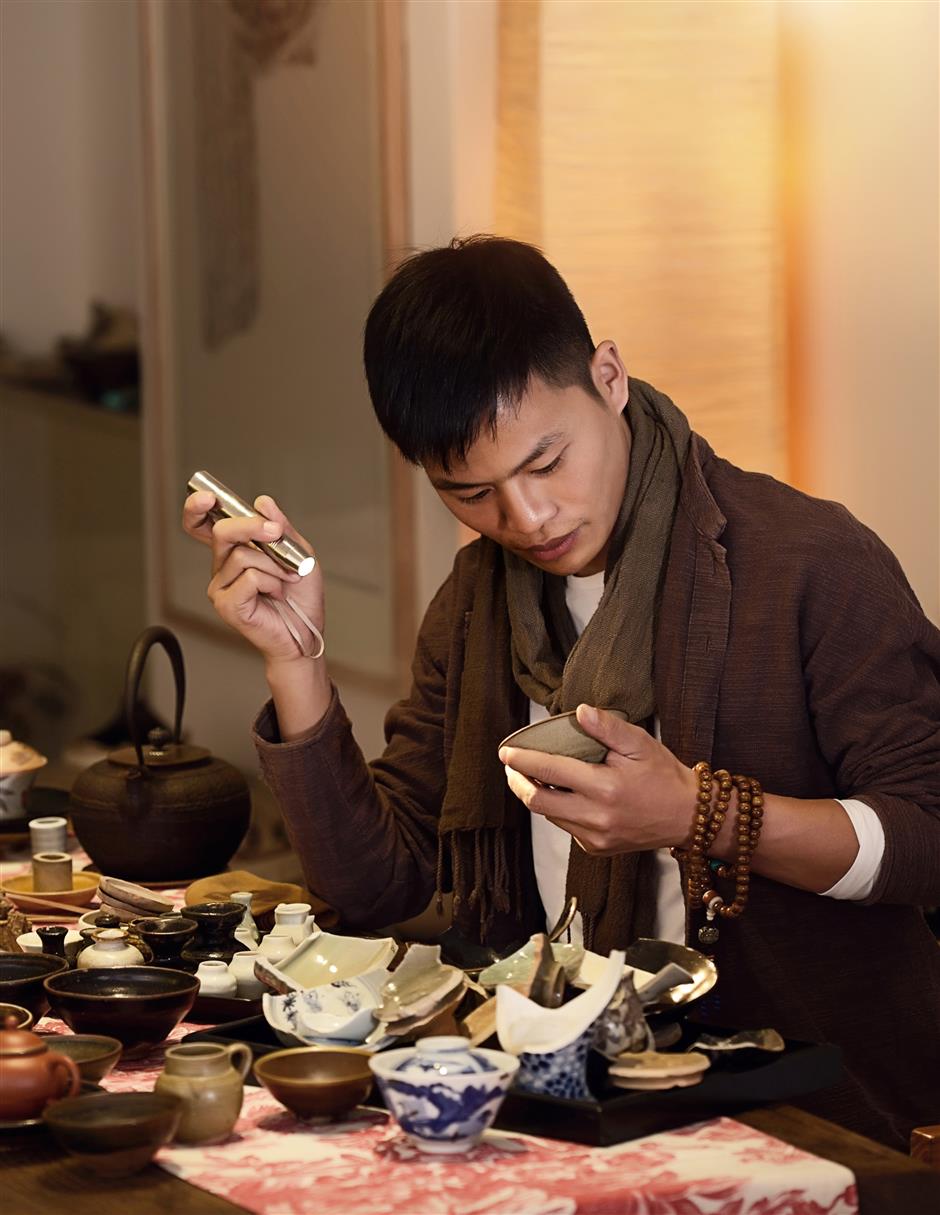 Tong Weicheng examines a porcelain bowl he is mending.

Mending a piece of porcelain ware requires several processes. First, the fragments need to be put together and then the position of the “nails” needs to be decided. After that, tiny holes are drilled along the cracks and the nails are inserted.

The drill used is called a jin gang zuan. In Chinese, there is a saying: “If you don’t have a jin gang zuan, then don’t take any porcelain job.” Or, in modern terms, “if you can’t stand the heat, get out of the kitchen.”

“The difficulty of mending is to find the best position for the nails,” Tong says. “You want to mend a ware with the least number of nails and make sure that the nails don’t damage the original patterns on the porcelain.”

Tong is equally interested in the history of the mending craft. He has visited museums across China and collected patched porcelain to study the evolution of ju.

“There are few written records,” he says. “And they only explain the meaning of the word ju, but never explain the history of it.”

According to Tong’s research, the mending skill can be traced back at least 5,000 years. Pottery of the Yangshao Culture unearthed in central China had tiny holes near cracks, while some jadeware more than 2,000 years old discovered at the Mausoleum of the Nanyue King in Guangdong Province had similar tiny holes. But at that time, rope string was used to mend the broken ware.

The current skill of porcelain mending seems to have appeared during the Tang Dynasty (618-907) and hasn’t changed much since. The only change might be that electric drills used more frequently than jin gang zuan.

Because porcelain was quite expensive in ancient times, menders were sought after by royalty and the wealthy. Mending didn’t come cheap. During the Qing Dynasty (1644-1911), menders started to charge according to the number of nails used — a tradition that continued into the 1980s.

The skill gradually disappeared as porcelain ware became more commonplace commodities. According to Tong, the last porcelain mender in Shanghai was an old man who had a booth at the City God Temple during the 1990s. The booth is long gone.

“Some of the menders wanted to make money, so that they deliberately increased the number of nails,” Tong explains. “You can see a row of nails patched on some porcelain ware discovered during the Qing Dynasty that was not actually necessary at all.” 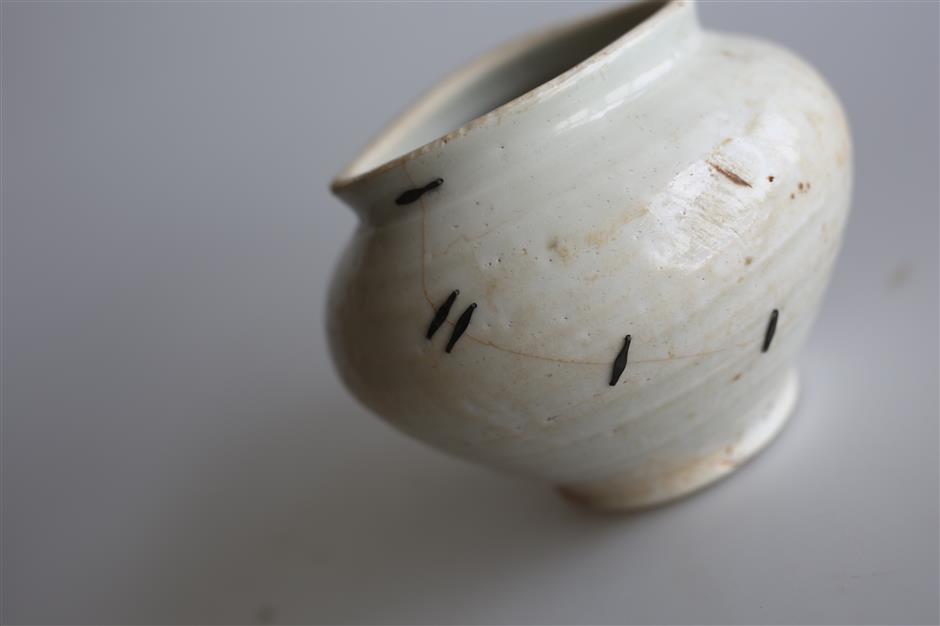 Tong charges clients according to the numbers of cracks rather than the number of nails used. If he finds that the mending would cost more than a porcelain ware itself, he advises clients not to bother.

“Sometimes, we can find beauty in fragments,” he says. “We don’t have to mend everything.”

In recent years, with more online promotion, porcelain repairing is in the spotlight again, but it no longer has practical significance in daily life. Tong says he appreciates that the skills of ju are becoming honored again, but he is concerned that the craftsmanship may lose its purity.

“A lot of factual mistakes are made in promotions,” he says.

“For example, some media claim there is porcelain mending on the famous painting ‘Along the River During the Qingming Festival’ of the Northern Song Dynasty (960-1127), but that’s not true. There is a lot of false information all over the Internet.”

While some craftsmen regard porcelain mending a form of “re-creation,” Tong begs to differ.

“The beauty of the porcelain ware itself, rather than the patchwork, should always be the central point,” Tong says. “We should never put the cart before the horse.”

Today he has more than 30 pupils in his training class, and he is hoping they will pass on those skills to more people. He also plans to write a book about the history of porcelain mending to fill in the blanks.

“I like to keep ju as it is,” he says. “The real thing is the most beautiful.”